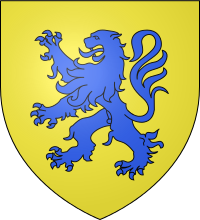 Arms of Percy: Or, a lion rampant azure

Henry was sixteen when his father died, so the Barony was placed in the custody of John de Felton.[1]

In 1316 he was granted the lands of Patrick IV, Earl of March, in Northumberland, by King Edward II of England.[2] In 1322, was made governor of Pickering Castle and of the town and castle of Scarborough and was later knighted at York.[3] Henry joined with other barons to remove the Despensers, who were favorites of Edward II.

Following a disastrous war with the Scots, Henry was empowered along with William Zouche to negotiate the Treaty of Edinburgh–Northampton.[4] This was an unpopular treaty and peace between England and Scotland lasted only five years.

He was appointed to Edward III's Council in 1327 and was given the manor and castle of Skipton. Was granted, by Edward III, the castle and barony of Warkworth in 1328. He was at the siege of Dunbar and the Battle of Halidon Hill and was subsequently appointed constable of Berwick-upon-Tweed.[5] In 1346, Henry commanded the right wing of the English, at the Battle of Neville's Cross.[6]