The Houston Texans are a professional American football team based in Houston, Texas. The team competes in the National Football League (NFL) as a member of the American Football Conference (AFC) South division. The Texans first played in 2002 as an expansion team after Houston's previous franchise, the Houston Oilers, moved to Nashville, Tennessee, where they are now the Tennessee Titans.[4] The team's majority owner is Bob McNair. The team clinched its first playoff berth during the 2011 season as AFC South division champions.[5] The Texans repeated as AFC South champions in 2012.

In 1997, Houston entrepreneur Bob McNair had a failed bid to bring a National Hockey League (NHL) expansion team to the city, and Bud Adams relocated the city's NFL team, the Houston Oilers, to Nashville where they were renamed the Tennessee Titans. In 1996, a year earlier, the Cleveland Browns had controversially relocated to become the Baltimore Ravens. As part of the settlement between the NFL, the city of Cleveland and the team owned by Art Modell, the league promised to return football to Cleveland within the following three years.

In order to even out the franchisees at 32, the league also contemplated adding another expansion franchise. As Houston was one of the favorites for the extra franchise along with Toronto and Los Angeles (which had lost the Rams and the Raiders in 1995), McNair then decided to join the football project and founded Houston NFL Holdings with partner Steve Patterson. In association with Houston Livestock Show and Rodeo, they would push for a domed stadium as part of the bid to lure the NFL back to Houston. On October 6, 1999 the NFL awarded the 32nd team to Houston, at the cost of $700 million.[1]

The Houston Texans joined the league at the 2002 NFL season, playing at the newly founded Reliant Stadium. While the team struggled in early seasons, results began to improve once native Houstonian Gary Kubiak became the head coach in 2006. The Texans finished with a .500 season (8-8) in both 2007 and 2008, and nearly qualified for the 2009–10 NFL playoffs with a 9–7 result in 2009. In 2010, the team started the season on a 4–2 record going into a Week 7 bye week, but promptly collapsed 2–8 in the second part of the season, finishing 6–10. The following season, former Cowboys head coach Wade Phillips was hired as the defensive coordinator of the Texans, and the improved defense led to the Texans finishing 10–6, winning their first AFC South title.[6] The Texans then beat wild card Cincinnati Bengals 31–10 in the first round of the 2011-12 NFL playoffs,[7] before a 20–13 defeat by the Ravens in the semifinals.[8]

The Texans surged as the team to beat in the AFC South in 2012, holding an 11–1 record by week 14. However, they lost three of their last four games to finish 12–4; beating the rival Indianapolis Colts in that four-game stretch allowed them to clinch their 2nd AFC South title. The Texans beat the Bengals again in the wild-card round, but they lost in the second round to the New England Patriots.[9] The Texans started 2–0 in 2013 but went into a tailspin and lost every game afterwards. Head Coach Kubiak was fired after being swept by the rival Jacksonville Jaguars, who themselves started 0–8. Wade Phillips filled in as head coach, but the Texans' poor form did not change, and they finished 2–14, tying, with 2005, their worst record in franchise history. The 14-game losing streak is also the worst in franchise history.

The Texans entered the 2014 season with a 14-game losing streak. Former Penn State head coach Bill O'Brien became the Texans' new head coach, and the third in franchise history, during the offseason.[10] In 2014, the Texans won three of their first four games, defeating the Redskins in the season opener, the Raiders, and the Bills, losing to the New York Giants. They lost three of their next four games, losing to the Dallas Cowboys, the Indianapolis Colts, and the Pittsburgh Steelers, respectively. The Texans went on to finish 9–7 in the 2014 season and barely missed the playoffs.

In the 2015 season, the Texans started with a 2-5 record. [11] Quarterback Ryan Mallett was released amidst controversy regarding his benching in favor of Brian Hoyer during a loss against the Indianapolis Colts.[12] Former Texans quarterback T.J. Yates has been signed to back up Hoyer for the rest of the season.[13] After a poor start, the Texans finished with a 9-7 record and won their third AFC South title.

On March 2, 2000, Houston NFL 2002 announced that the team name search had been narrowed down to five choices: Bobcats, Stallions, Texans, Toros, and Apollos. The list of names was determined after several months of research conducted jointly by Houston NFL 2002 and NFL Properties. An online survey regarding the name generated more than 65,000 responses in just seven days.

On September 6, 2000, the NFL's 32nd franchise was officially christened the Houston Texans before thousands at a downtown rally on Texas Avenue. McNair explained that the name evoked "someone who's powerful, independent, courageous and hard-working".[14] The name had previously been the name of a defunct World Football League franchise, which moved to Louisiana to become the Shreveport Steamer, and the nickname Texans was also used by the precursor of the present-day Kansas City Chiefs, the Dallas Texans of the AFL. The nickname "Texans" was more recently used by the now-defunct Canadian Football League franchise in San Antonio. Owner Bob McNair did have to make a deal with Chiefs' owner Lamar Hunt to use the Texans nickname for his new team.[6]

Along with the team name, McNair also unveiled the team logo, an abstract depiction of a bull's head, split in such a way to resemble the flag of Texas, including a lone star to stand for the eye, the five points of which representing pride, courage, strength, tradition and independence. McNair described the colors as "Deep Steel Blue", "Battle Red" and "Liberty White".[14] A year later the Texans unveiled their uniforms during another downtown rally.

The Texans' helmet is dark blue with the Texans bull logo. The helmet was initially white when the team name and logo were unveiled, but was later changed to dark blue. The uniform design consists of red trim and either dark blue or white jerseys. The team typically wears white pants with its blue jerseys and blue pants with its white jerseys. Starting with the 2006 season, the Texans wear all-white for their home opener, and the team began to wear an all-blue combination for home games vs. the Indianapolis Colts. In 2003, the Texans introduced an alternative red jersey with blue trim; they wear this jersey at one home game each year, usually against a division rival. In 2007 the Texans introduced red pants for the first time, pairing them with the red jerseys for an all-red look (this uniform combination was not well-received and has since been retired). In October 2008 the Texans paired blue socks (instead of the traditional red) with their blue pants and white jerseys.

In 2002 the team wore a patch commemorating their inaugural season. Also, they celebrated 10 years as a franchise by wearing an anniversary patch throughout 2012.

The team's official mascot is Toro.[15] The team also has a cheerleading squad simply named the Houston Texans Cheerleaders.[16]

The Texans are the youngest franchise in the NFL, having only been competing in the League since 2002. For most of that time, they were considered perennial bottom-dwellers in the AFC South. For that reason, they have not had the history or the reputation on which to build classic rivalries like the ones that often exist between older franchises.

However, there are a few franchises for whom Texans fans hold special animosity. The Tennessee Titans, formerly the Houston Oilers before their relocation in the 1990s, are viewed by many Houston fans as the Texans' chief rival. The Jacksonville Jaguars, and the Indianapolis Colts, whom the Texans had never defeated in Indianapolis (compiling an all-time record of 0–13 there until a win in Week 15 of the 2015 season), are Texans rivals in the AFC South. The Texans also have an intrastate rivalry with the Dallas Cowboys, with whom they contest the so-called Governor's Cup every year (either in the preseason or the regular season) for bragging rights in the state of Texas.

More recently, Houston has increased bitterness with the Indianapolis Colts due to longtime star Texans receiver Andre Johnson leaving for the Colts after the 2014 season. The Texans have also developed a somewhat close rivalry with the Cincinnati Bengals, starting in 2011 and 2012, when young Bengals quarterback and Houston-area native Andy Dalton led the Bengals to the playoffs only to be stopped short by the Texans two years in a row. (In 2011, the Texans had clinched their playoff spot, the first ever for the franchise, with a regular-season victory in Cincinnati.) The two teams have competitive bitter matchups in the regular season too, including the 3-5 Texans' upset road victory over the until-then undefeated Bengals on Monday Night Football on November 16, 2015.

As members of the AFC South, the Texans play 6 of their 16 regular season games against other AFC South teams. As of the end of the 2015 season, the Texans have a cumulative record of 35–49 (.417) against their three divisional rivals: 17–11 versus the Jacksonville Jaguars; 13–15 versus the Tennessee Titans; and 5–23 versus the Indianapolis Colts (including losses in all but one of 14 games played there). The Texans have fared better against the rest of the AFC, posting a regular season record of 37–41 (.474) against AFC teams from divisions other than the South, with a 13–12 record against AFC East teams, 12–16 against AFC North teams, and 12–13 against AFC West teams. The Texans are 21–31 (.404) against NFC teams, tallying a 4–12 record against NFC East teams, 6–6 against NFC North teams, 7–5 against NFC South teams, and 4–8 against NFC West teams.[17]

As of the end of the 2015 season, there is one team against which the Texans have never lost: the Chicago Bears (3–0). There are also two teams which the Texans have never beaten: the Minnesota Vikings (0–3) and Philadelphia Eagles (0–4). According to the NFL's scheduling formula, the Texans' next regular-season games versus the Bears and Vikings will be in 2016, and the Eagles in 2018.

* Asterisk indicates a player who was selected to the Pro Bowl only as a member of another team. 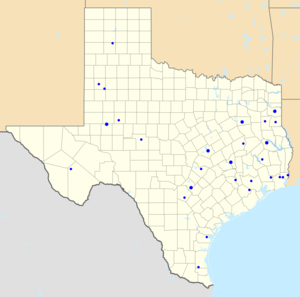 The theme song of the Texans is "It's Football Time In Houston" by Clay Walker.[18] The Texans tried to introduce a new fight song in 2003 written by Chad Kroeger from Nickelback, but quickly returned to the original after a negative reception by fans. The song was donated by Walker to the city of Houston.[19]

The Texans' defensive squad takes the field to the sound of "Bulls on Parade" by Rage Against the Machine.[20] The Texans started using the song after former linebacker Connor Barwin coined the nickname in a tweet in 2011.[21]

"Hats Off to the Bull" by the hard rock band Chevelle has become another popular theme song of the entire team. It is frequently played at home games.

Work in the community