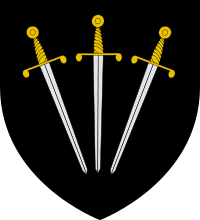 Arms of Poulett: Sable, three swords pilewise points in base proper pomels and hilts or

Sir Hugh Paulet or Poulet (his spelling) (bef. 1510 – 6 December 1573) was an English military commander and Governor of Jersey.

In 1532 Hugh was in the commission of the peace for Somerset; and he was heir and sole executor to his father in 1538, receiving a grant of the manor of Sampford-Peverel, Devon. He was supervisor of the rents of the surrendered Glastonbury Abbey in 1539, had a grant of Upcroft and Combe near Crewkerne, Somerset, in 1541, and was Sheriff of Somerset and Sheriff of Dorset in 1536, 1542, and 1547 and was Knight of the Shire for Somerset in 1539.

On 18 October 1537 he was knighted by King Henry VIII and was invited to the baptism of his son Prince Edward (the future King Edward VI) two days later. In 1544 he was treasurer of the English army at the siege of Boulogne, and distinguished himself at the capture of the Brey on 1 September 1544 in the presence of the king. On the accession of King Edward VI he was one of those charged by Henry VIII's executors, on 11 February 1547, with the good order of the West Country shires. In 1549 he was knight-marshal of the army raised by John Russell, 1st Baron Russell (later 1st Earl of Bedford) to put down the Prayer Book Rebellion. He led the pursuit against the rebels, and defeated them at King's Weston, near Bristol.

In 1550 he was a commissioner to inquire into the liturgy in the island of Jersey, and to put down obits, dispose of church bells, and to enact other Protestant reforms. He was shortly afterwards appointed Captain of Jersey and Governor of Mont Orgueil Castle, in the place of Edward Seymour, 1st Duke of Somerset. This office he retained for 24 years (according to Philip Falle) but from 25 April 1559, in which year he was made Vice-President of the Welsh Marches under John Williams, 1st Baron Williams de Thame, he performed his functions through a lieutenant, his son Amias Paulet.

In 1562 when French Protestants surrendered Le Havre to Queen Elizabeth I, she commissioned Paulet as adviser to Ambrose Dudley, 3rd Earl of Warwick, who was to take command of the garrison and act as high-marshal. Paulet arrived in the Aide with Count Montgomerie and with £5,000 on 17 December 1562. On 1 April 1563 he conferred unsuccessfully with the Rheingrave, was sent to England in June, and returned on 14 July with eight hundred men from Wiltshire and Gloucestershire. On 23 July 1563 he met the constable Montmorency, and on 28 July articles for the surrender of Le Havre were agreed upon. On the 29th the English evacuated Le Havre, bringing the plague with them to London. In November Paulet was one of the commissioners to settle the debts incurred in the expedition.

Sir Hugh was knight of the shire for Somerset in the parliament which met on 8 May 1572, and probably died in the following December.

He married twice, with progeny from the first marriage only:

Paulet died probably in December 1572. A monument in the north aisle of the church at Hinton St. George, with the effigies of a man in armour and his lady, with an inscription, probably commemorates Sir Hugh and his first wife.