The Inca Civil War, also known as the Inca Dynastic War, the Inca War of Succession, or, sometimes, the War of the Two Brothers was fought between two brothers, Huáscar and Atahualpa, sons of Huayna Capac, over the succession to the throne of the Inca Empire.[1]:146-149[2] The war followed Huayna Capac's death in 1527, although it did not begin until 1529, and lasted until 1532. Huáscar initiated the war because he saw himself as the rightful heir to the kingdom of all the Incas. Regardless of legitimacy, Atahualpa proved himself to be tactically superior to his brother in warcraft and to the mighty armies of Cuzco, which their father had stationed in the north part of the empire during the military campaign.[3]

Causes of the division of the empire

Inca Empire under the control of Atahualpa. It was almost coterminous with the former Chinchay Suyu province 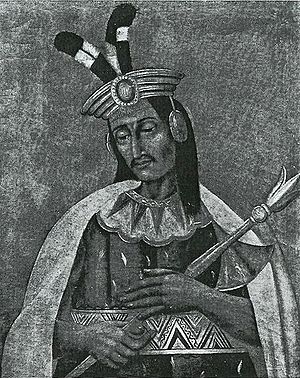 Huáscar, who was defeated in the war between him and his brother

In 1524-1526, the Spaniards under Francisco Pizarro explored South America.[4] There were 62 horsemen and 106 foot soldiers.[5] Smallpox was taken to the continent, causing disaster for the Incas. Sapa Inca Huayna Capac travelled north to investigate the strangers. Although he never met any Spaniards, he contracted smallpox and died in 1524. His eldest son and heir, Ninan Cuyochi, died soon after him.[6] Thus it became uncertain as to who should be the next Inca king. There were no clear rules of succession.[7] The choice stood between two sons of Huayna Capac, Huáscar, and Atahualpa, born of different mothers.

Huáscar was appointed king by Huayna Capac,[8] and was supported by the nobility in Cuzco, by religious and political authorities and other main figures. He was the eldest "pure" Inca, because his parents, Huayna Capac and Chincha Ocllo, were siblings.[9] Huascar was ill tempered, suspicious and disrespectful of the laws and customs.

Atahualpa's mother, Paccha, was born outside the royal family (although born into the Shyri royal family) and was merely the daughter of Cacha Shyri Duchicela, the former leader against the Incan conquest in the north.[10] He was much liked in the North, as he was good tempered and carried himself with royal dignity. He allegedly had cunning and early wisdom.

Nobles considered Atahualpa illegitimate and Huáscar felt it an insult that a "bastard" was even considered for Sapa Inca.[11]

Huáscar eventually became king,[12] but he felt that Atahualpa should not have any more land and that he should pay homage to him.[13]

Movements during the war

Soon after Huascar claimed the throne, he expected all subjects to swear him allegiance. To announce his loyalty, Atahualpa sent his most trusted captains to Cuzco, along with generous gifts of gold and silver (as was customary). Suspicious, Huascar refused Atahualpa's offering.[14] Accusing him rebellion, he ordered some of his messengers killed, and sent back his captains dressed as women. Atahualpa declared war against his brother. Just before the Spaniards arrived in Cajamarca, Atahualpa had sent troops to Cusco to capture Huáscar, and later on his way to the North to kill him. (Later Francisco Pizarro used this as one of excuses to execute Atahualpa after Pizarro collected the ransom of gold and silver promised to him for his freedom.)

Huáscar gathered his soldiers in preparation for attack. After getting stunned by his brother, Huascar proclaimed him a traitor.[15] The generals Chalcuchimac, Quizquiz, and Rumiñaei, were thought to have been born in the northern part of the empire, and thus transferred their loyalty to Atahualpa[16] who assembled the former imperial army in Quito, the Northern region left for his control. People loyal to Atahualpa created a new capital in Quito, so they could follow their preferred ruler and gain favor within the government. Atahualpa agreed to take the leadership role of Sapa Inca in this new capital.

At this news, Huáscar and his army moved north[17] in a surprise attack at Tumebamba. The local Canari supported the attack, in order to expel the nearest source of power, with the aim oust the Inca. Atahualpa was captured and imprisoned. While the army celebrated, they got drunk and allowed a woman in to meet Atahualpa. She snuck in a tool that he used that evening to drill a hole and escape.[18] He immediately prepared a counterattack with his large, experienced army from Quito.[19]

From 1531 through 1532, the armies fought many battles.[20] Soon after his escape, Atahualpa moved his army south to the city of Ambato.[21] There, on the plains of Mochacaxa, they found Huáscar's men, defeated them,[22] and captured and killed many soldiers and even the head general, Atoc whom they tortured with darts and arrows.[23] Atahualpa had his skull made into a "gilded drinking cup, which the Spaniards would note that Atahualpa was still using four years later.”[24]

Following this victory, Atahualpa strengthened his army and continued south into his brother's land, winning every encounter. Entering Cajamarca, he added to his numbers. He first tried peaceful means to gain loyalty from Huáscar’s men; where that did not work, he became extremely violent, murdering large numbers. This scared the survivors into surrender. One report described how Atahualpa massacred the Cañari tribesmen because they pledged allegiance to Huáscar.[25] When he finally arrived in Cajamarca, Atahualpa sent the majority of his army ahead, led by his head generals, while he stayed in the safety of the city and explored rumors that the Spaniards were entering the land.[26]

Atahualpa's army pushed south through Huáscar’s territory, wining at Bonbon and Jauja. The battle starting on the hillside of Vilcas seemed to favor Huáscar stationed in a stone fortress at the top of the hill, but eventually he retreated. Atahualpa's men won at Pincos, Andaguayias, at the battle between Curaguaci and Auancay northwest of Cuzco, at Limatambo, about 20 miles from Cuzco, and Ichubamba, where Huáscar’s men fled.[27] In 1532, with Cuzco endangered, “Huáscar sent another army to meet Atahualpa’s, but after precarious battles, his forces were routed" and Huáscar was captured.[28] Atahualpa’s army had won the war. The news traveled back to Atahualpa in Cajamarca, where the army then learned about the Spanish incursion.

Pizarro and the end of the Spanish conquest of Tahuantinsuyo

Atahualpa was saluted as a hero; when recapturing Cajamarca, making camp outside the city with some 40,000 troops[29] while Chalcuchimac and Quizquiz chased Huáscar’s army south. With a disastrous northern campaign, Huáscar had not only lost his best generals and many soldiers, but his army was shocked and demoralized army. Huascar and Atahualpa’s armies met. Huáscar, after finding himself in a dominant position, refused to make use of it, opting for a safe retreat, crossing the Cotabambas River on the way to Cuzco.

Chalkuchimac had a plan of his own and predicted the action of Topa Atao, and divided his army in two, sending one contingent around Topa Atao's back, enveloping and destroying the defenders. In January 1532, only miles from Cuzco, Huáscar’s retreat was cut off at Quipaipan, and his army was annihilated and disbanded.[30] Huáscar was captured and the capital Cuzco was seized by Quizquiz, who had it purged from Huáscar’s supporters in a bloody massacre. Huáscar himself was executed the following year.[31][32]

During the course of the war, Atahualpa's army had grown to 250,000 men, all the strength of the Empire. However, before he could leave Cajamarca, the new king encountered conquistador Francisco Pizarro, who had reached the city on 16 November, and Atahualpa was captured in the ensuing Battle of Cajamarca.[33]

In the custody of Pizarro, Atahualpa was told by Pizarro that he would bring Huáscar to Cajamarca and Pizarro would judge which brother was the better Sapa Inca. In response, Atahualpa ordered Huáscar killed allegedly by drowning.[34] Only months later on August 29, 1533, Atahualpa was himself garroted at the plaza of Cajamarca by Pizarro’s men.[35]

It is not clear how many Inca were killed during the Civil War. The estimated population of indigenous people at contact is anywhere from 60,000 to 1,100,000.[36] Ratios of pre-conquest population to the lowest indigenous population have been estimated as 20:1 or 25:1, meaning that only one of every 20 or 25 people survived.[37]

Of the major battles fought, at Cajamarca the Spanish ambushed the Andean warriors and killed 1,500 without suffering any losses.[38] There are no other hard numbers of Inca or Spanish death tolls at any of the other battles. Spanish and European disease caused widespread indigenous deaths across Latin America. Smallpox was the first recorded epidemic in December 1518; on Columbus’ second voyage, an influenza outbreak is believed to have killed large numbers, including Spanish. "Of the 1500 men who sailed from Cádiz on September 25, 1493, scarcely 200 were alive a decade later."[39]