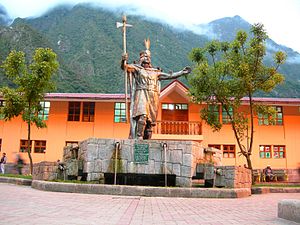 Representation of the Sapa Inca, Pachacuti, wearing the "Mascapaicha" (royal crown), in the main square of Aguas Calientes, Peru

The Sapa Inca (in hispanicized spelling) or Sapa Inka (Quechua for "the only Inca"), also known as Apu ("divinity"), Inka Qhapaq ("mighty Inca"), or simply Sapa ("the only one") was the ruler of the Kingdom of Cusco and later, the Emperor of the Inca Empire (Tawantinsuyu) and the Neo-Inca State. The origins of the position are mythical and tied to the legendary foundation of the city of Cusco but historically it seems to have come into being around 1100. The position was hereditary, with son succeeding father.

There were two known dynasties, led by the Hurin and Hanan moieties respectively.[1] The latter was in power at the time of Spanish conquest. The last Sapa Inca of the Inca Empire was Atahualpa, who was executed by Francisco Pizarro and his conquistadors in 1533, though several successors later claimed the title.

Little is known of the rulers of the first dynasty of Sapa Incas. Evidently, they were affiliated with the Hurin moiety and their rule did not extend beyond the Kingdom of Cusco. Their origins are tied to the mythical establishment of Cusco and are shrouded in later foundation myth. The dynasty was supposedly founded by Manco Cápac, considered the son of the sun god Inti.

As a rough guide to the later reputation of the early Sapa Incas, in later years capac meant warlord and sinchi meant leader.

The second dynasty was affiliated with the Hanan moiety and was founded under Inca Roca, the son of the last Hurin Sapa Inca, Cápac Yupanqui. After Cápac Yupanqui's death, another of his sons, Inca Roca's half-brother Quispe Yupanqui, was intended to succeed him. However, the Hanan revolted and installed Inca Roca instead.

Ninan Cuyochi, who was Inca for only a few days in 1527, is sometimes left off the list of Sapa Incas because news of his death from smallpox arrived in Cusco shortly after he was declared Sapa Inca. He had been with Huayna Cápac when he died of smallpox. The death of Ninan, the presumed heir, led to the Inca Civil War between Huáscar and Atahualpa, a weakness that the Spanish exploited when they conquered the Inca Empire.

This last Sapa Inca must not be confused with Túpac Amaru II, leader of an 18th-century Peruvian uprising.