From Infogalactic: the planetary knowledge core
Jump to: navigation, search
This article is about the Inca emperor. For a mountain in the Cusco Region, Peru, see Atawallpa (Cusco). For the Bolivian province, see Atahuallpa Province.

Atahualpa, also Atahuallpa, Atabalipa (in hispanicized spellings) or Atawallpa (Aymara and Quechua)[2][3] (c.1500–26 July 1533) was the last Sapa Inca (sovereign emperor) of the Inca Empire (Tawantinsuyu) before the Spanish conquest. Atahualpa became emperor when he defeated and executed his older half-brother Huáscar in a civil war sparked by the death of their father, Inca Huayna Capac, from an infectious disease (possibly smallpox).[4]

During the Spanish conquest, the Spaniard Francisco Pizarro captured Atahualpa and used him to control the Inca Empire. Eventually, the Spanish executed Atahualpa, effectively ending the empire. Although a succession of several emperors who led the Inca resistance against the invading Spaniards claimed the title of Sapa Inca as rulers of the Neo-Inca State, the empire began to disintegrate after Atahualpa's death.

Pedro Sarmiento de Gamboa states Atahualpa was the illegitimate son of Huayna Capac and his cousin, Tocto Coca. Atahualpa decided to stay behind in Quito after his father's death, which prompted Huascar to declare war.[5]:112,119–120

Most chroniclers suggest that Atahualpa was born in Quito, though other stories suggest various other birthplaces.[6]

His leading generals were Quizquiz, Chalkuchimac, and Rumiñawi. In April 1532, Quizquiz and his companions led the armies of Atahualpa to victory in the battles of Mullihambato, Chimborazo and Quipaipan. The Battle of Quipaipan was the final one between the warring brothers. Quizquiz and Chalkuchimac defeated Huáscar's army, captured him, killed his family, and seized the capital, Cuzco. Atahualpa had remained behind in the Andean city of Cajamarca.[7]:146–149

Here he encountered the Spanish, led by Pizarro.[7]:158 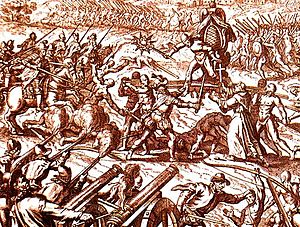 Emperor Atahualpa during the Battle of Cajamarca

In January 1531, a Spanish expedition led by Francisco Pizarro, on a mission to conquer the Inca Empire, landed on Puná Island. Pizarro brought with him 169 men and 69 horses.[4] The Spaniards headed south and occupied Tumbes, where they heard about the civil war that Huáscar and Atahualpa were waging against each other.[8] About a year and a half later, in September 1532, after reinforcements arrived from Spain, Pizarro founded the city of San Miguel de Piura, and then marched towards the heart of the Inca Empire, with a force of 106 foot-soldiers and 62 horsemen.[9] Atahualpa, in Cajamarca with his army of 80,000 troops, heard that this party of strangers was advancing into the empire, and sent an Inca noble to investigate.[10] The noble stayed for two days in the Spanish camp, making an assessment of the Spaniards' weapons and horses. Atahualpa decided that the 168 Spaniards were not a threat to him and his 80,000 troops, so he sent word inviting them to visit Cajamarca and meet him, expecting to capture them.[11] Pizarro and his men thus advanced unopposed through some very difficult terrain. They arrived at Cajamarca on November 15, 1532.[12]

Atahualpa and his army had camped on a hill just outside Cajamarca. He was staying in a building close to the Konoj hot springs. His soldiers were living in tents they had set up around him.[13] When Pizarro arrived in Cajamarca, the town itself was mostly empty except for a few hundred acllas. The Spaniards billeted in certain long buildings on the main plaza, and Pizarro sent an embassy to the Inca, led by Hernando de Soto, consisting of 15 horsemen and an interpreter; shortly thereafter he sent 20 more horsemen as reinforcements in case of an Inca attack. These were led by his brother, Hernando Pizarro.[14]

The Spaniards invited Atahualpa to visit Cajamarca to meet Pizarro, which he resolved to do the following day.[15] Meanwhile, Pizarro was preparing an ambush to trap the Inca: while the Spanish cavalry and infantry were occupying three long buildings around the plaza, some musketeers and four pieces of artillery were located in a stone structure in the middle of the square.[16] The plan was to persuade Atahualpa to submit to the authority of the Spaniards and, if this failed, there were two options: a surprise attack, if success seemed possible, or keeping up a friendly stance if the Inca forces appeared too powerful.[17] 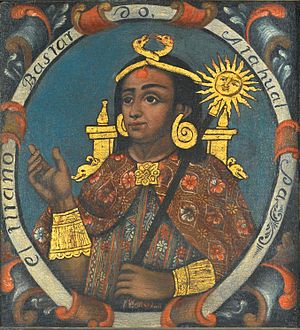 The following day, Atahualpa left his camp at midday preceded by a large number of men in ceremonial attire; as the procession advanced slowly, Pizarro sent his brother Hernando to invite the Inca to enter Cajamarca before nightfall.[18] Atahualpa entered the town late in the afternoon in a litter carried by eighty lords; with him were four other lords in litters and hammocks and 5-6,000 men carrying small battle axes, slings and pouches of stones underneath their clothes.[19] "He was very drunk from what he had imbibed in the [thermal] baths before leaving as well as what he had taken during the many stops on the road. In each of them he had drunk well. And even there on his litter he requested drink." [20] The Inca found no Spaniards in the plaza, as they were all inside the buildings; the only one to come out was the Dominican friar Vincente de Valverde with an interpreter.[21] Although there are different accounts as to what Valverde said, most agree that he invited the Inca to come inside to talk and dine with Pizarro. Atahualpa instead demanded the return of every single thing the Spaniards had taken since they landed.[22] According to eyewitness accounts, Valverde then spoke about the Catholic religion but did not deliver the requerimiento, a speech requiring the listener to submit to the authority of the Spanish Crown and accept the Christian faith.[23] At Atahualpa's request, Valverde gave him his breviary but after a brief examination, the Inca threw it to the ground; Valverde hurried back toward Pizarro, calling on the Spaniards to attack.[24] At that moment, Pizarro gave the signal; the Spanish infantry and cavalry came out of their hiding places and charged the unsuspecting Inca retinue, killing a great number while the rest fled in panic.[25] Pizarro led the charge on Atahualpa but managed to capture him only after killing all those carrying him and turning over his litter.[26] Not a single Spanish soldier was killed. 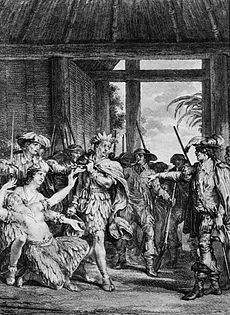 Seizure of Atahualpa at Cajamarca

On 17 November the Spaniards sacked the Inca army camp, in which they found great treasures of gold, silver, and emeralds. Noticing their lust for precious metals, Atahualpa offered to fill a large room about 22 feet (6.7 m) long and 17 feet (5.2 m) wide up to a height of 8 feet (2.4 m) once with gold and twice with silver within two months.[27] It is commonly believed that Atahualpa offered this ransom to regain his freedom; however, it seems likelier that he did so to avoid being killed, as none of the early chroniclers mention any commitment by the Spaniards to free Atahualpa once the metals were delivered.[28] 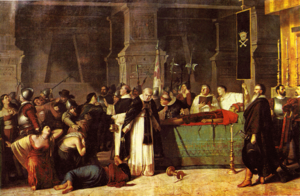 After several months in fear of an imminent attack from general Rumiñahui, the outnumbered Spanish saw Atahualpa as too much of a liability and decided to execute him. Pizarro staged a mock trial and found Atahualpa guilty of revolting against the Spanish, practicing idolatry, and murdering Huáscar, his brother. Atahualpa was sentenced to execution by burning. He was horrified, since the Inca believed that the soul would not be able to go on to the afterlife if the body were burned. Friar Vincente de Valverde, who had earlier offered his breviary to Atahualpa, intervened, telling Atahualpa that if he agreed to convert to Catholicism, he would convince Pizarro to commute the sentence. Atahualpa agreed to be baptized into the Catholic faith. He was given the name Francisco Atahualpa in honor of Francisco Pizarro. In accordance with his request, he was strangled with a garrote on 26 July 1533.[29] Following his execution, his clothes and some of his skin were burned, and his remains were given a Christian burial.[30] Atahualpa was succeeded by his brother, Túpac Huallpa, and later by another brother Manco Inca.[7]:

It was after the death of Pizarro, Inés Yupanqui, the favorite sister of Atahualpa, who had been given to Pizarro in marriage by her brother, married a Spanish cavalier named Ampuero and left for Spain. They took her daughter by Pizarro with them, and she was later legitimized by imperial decree. Francisca Pizarro Yupanqui married her uncle Hernándo Pizarro in Spain, on October 10, 1537— they had a son, Francisco Pizarro y Pizarro. The Pizarro line survived Hernando's death, although it is extinct in the male line. Pizarro's third son, by a relative of Atahualpa renamed Angelina, who was never legitimized, died shortly after reaching Spain.[31] Another relative, Catalina Capa-Yupanqui, who died in 1580, married a Portuguese nobleman named António Ramos, son of António Colaço. Their daughter was Francisca de Lima who married Álvaro de Abreu de Lima, who was also a Portuguese nobleman.

Atahualpa Inca's conflict with Pizarro was dramatized by Peter Shaffer in his play The Royal Hunt of the Sun, which originally was staged by the National Theatre in 1964 at the Chichester Festival then in London at the Old Vic. The role of Atahualpa was played by Robert Stephens and by David Carradine (who received a Tony Award nomination) in the 1965 Broadway production.[32] Christopher Plummer was Atahualpa in the 1969 movie version of the play.[33]