Inca mythology includes many stories and legends that attempt to explain or symbolize Inca beliefs.[1]

All those that followed the Spanish conquest of the Inca Empire by Francisco Pizarro burned the records kept by the Inca culture. There is currently a theory put forward by Gary Urton that the Quipus could have represented a binary system capable of recording phonological or logographic data. Still, to date, all that is known is based on what was recorded by priests, from the iconography on Incan pottery and architecture, and from the myths and legends that have survived among the native peoples. 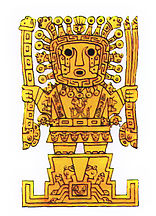 Viracocha, is the great creator god in Inca mythology

Manco Cápac the legendary founder of the Inca Dynasty in Peru and the Cusco Dynasty at Cusco. The legends and history surrounding this mythical figure are very jumbled, especially those concerning his rule at Cuzco and his birth or his origins respectively. In one legend, he was the son of Tici Viracocha. In another, he was brought up from the depths of Lake Titicaca by the sun god Inti. However, commoners were not allowed to speak the name of Inca Viracocha, which is possibly an explanation for the need for three foundation legends rather than just the first.[2]

There were also many myths about Manco Cápac and his coming to power. In one myth, Manco Cápac and his brother Pacha Kamaq were sons of the sun god Inti. Manco Cápac, himself, was worshiped as a fire and sun god. In another myth, Manco Cápac was sent with Mama Ocllo (others even mention numerous siblings) to Lake Titicaca where they resurfaced and settled in Isla Del Sol, Bolivia. According to this Inti legend, Manco Cápac and his siblings were sent up to the earth by the sun god and emerged from the cave of Puma Orco at Paqariq Tampu carrying a golden staff called ‘tapac-yauri’. They were instructed to create a Temple of the Sun in the spot where the staff sank into the earth to honor the sun god Inti, their father. During the journey, one of Manco's brothers (Ayar Cachi) was tricked into returning to Puma Urqu and sealed inside, or alternatively was turned to ice, because his reckless and cruel behavior angered the tribes that they were attempting to rule. (huaca).

In another version of this legend, instead of emerging from a cave in Cuzco, the siblings emerged from the waters of Lake Titicaca. Since this was a later origin myth than that of Pacaritambo it may have been created as a ploy to bring the powerful Aymara tribes into the fold of the Tawantinsuyo.

In the Inca Virachocha legend, Manco Cápac was the son of Inca Viracocha of Paqariq Tampu which is 25 km (16 mi) south of Cuzco. He and his brothers (Ayar Auca, Ayar Cachi, and Ayar Uchu); and sisters (Mama Ocllo, Mama Huaco, Mama Raua, and Mama Cura) lived near Cusco at Paqariq Tampu, and uniting their people and the ten ayllu they encountered in their travels to conquer the tribes of the Cusco Valley. This legend also incorporates the golden staff, which is thought to have been given to Manco Cápac by his father. Accounts vary, but according to some versions of the legend, the young Manco jealously betrayed his older brothers, killed them, and then became Cusco.

File:Diablo puneño.jpg
Supay, god of death in the Andean diablada

Like the Romans, the Incas permitted the cultures they integrated into their empire to keep their individual religions. Below are some of the various gods worshiped by the peoples of the Incan empire, many of which have overlapping responsibilities and domains. Unless otherwise noted, it can safely be assumed these were worshipped by different ayllus or worshipped in particular former states.[3]

Inca cosmology was ordered in three spatio-temporal levels or Pachas.[5] These included: 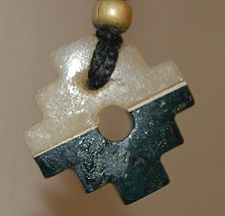 Chakana or tree of life