From Infogalactic: the planetary knowledge core
Jump to: navigation, search
"Between the Wars" redirects here. For other uses, see Between the Wars (disambiguation). 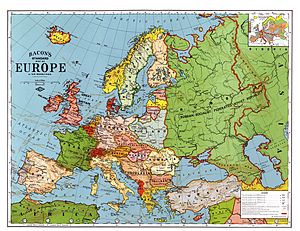 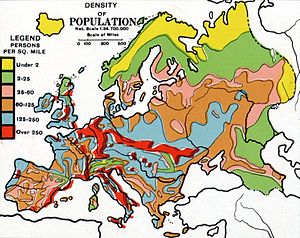 In the context of the history of the twentieth century, the interwar period[1][2][3] or interbellum (Latin: inter-, "between" + bellum, "war") was the period between the end of World War I and the beginning of World War II—the period beginning with the Armistice with Germany that concluded World War I in 1918 and the following Paris Peace Conference in 1919, and ending in 1939 with the invasion of Poland and the start of World War II.

This period of history was marked by turmoil as Europe struggled to recover from the devastation of the First World War and destabilising effects of the loss of a number of monarchies, including those of the German, Austro-Hungarian, Russian and Ottoman empires. Later a period of considerable prosperity (the Roaring Twenties) followed, but this changed dramatically with the onset of the Great Depression in 1929. It was during this time that the Weimar Republic in Germany gave way to two episodes of political and economic turmoil, the first culminated in the German hyperinflation of 1923 and the failed Beer Hall Putsch of that same year. The second convulsion, brought on by the worldwide depression, resulted in the rise of Nazism. In Asia, Japan became an ever more assertive power, especially with regard to China.

One main institution intended to bring stability was the League of Nations, created after the First World War with the intention of maintaining world security and peace and encouraging economic growth between member countries. The League was undermined from the start by the non-participation of the United States and the Soviet Union, and subsequently by the bellicosity of Mussolini's Italy, Nazi Germany, and Imperial Japan – leading many to question its legitimacy and effectiveness.

A series of international crises strained the League to its limits, the earliest being the invasion of Manchuria by Japan and the Abyssinian Crisis of 1934-36, in which Italy invaded Ethiopia (Abyssinia), one of the last few independent African nations at that time. The League tried to enforce economic sanctions upon Italy, but to no avail. The incident highlighted French and British weakness, exemplified by their reluctance to alienate Italy and lose her as their ally. The limited actions taken by the Western powers pushed Mussolini's Italy towards alliance with Hitler's Germany anyway.[citation needed] The Abyssinian war showed Hitler how weak the League was and encouraged his participation in the Spanish Civil War.[citation needed] He also re-militarised the Rhineland in defiance of the Treaty of Versailles. This was the first in a series of provocative acts culminating in the invasion of Poland in September 1939 and the beginning of the Second World War.

There were also other comparably smaller conflicts that major European nations were involved in, such as the Rif War.