The Japan Ground Self-Defense Force (JGSDF; Japanese: 陸上自衛隊;, Rikujō Jieitai?), is the main branch of the Japan Self-Defense Forces responsible for land-based military operations. It is the de facto army of Japan. The JGSDF was created on July 1, 1954. It is sometimes also referred to as the GSDF.

New military guidelines, announced in December 2010 will direct the Jieitai away from its Cold War focus on the Soviet Union to a focus on China, especially regarding the dispute over the Senkaku Islands. The largest of the three services of the Japan Self-Defense Forces, the Japan Ground Self-Defense Force is tasked with maintaining internal security in Japan and operates under the command of the chief of the ground staff, based in the city of Ichigaya, Shinjuku, Tokyo. The present chief of the ground staff is General Kiyofumi Iwata (Japanese: 岩田 清文).

Japan accepted the Potsdam Declaration in 1945, and, in compliance with Article 9, the Imperial Japanese Army and Imperial Japanese Navy were dismantled. Both were replaced by the United States Armed Forces occupation force, which assumed responsibility for the external defense of Japan.

On the outbreak of the Korean War, many U.S. units were transferred to Korea, and Japan was perceived as lacking defenses. Encouraged by the American occupation authorities, the Japanese government in July 1950 authorized the establishment of a National Police Reserve, consisting of 75,000 men equipped with light infantry weapons.[3]

Under the terms of the Treaty of Mutual Cooperation and Security between the United States and Japan, United States forces stationed in Japan were to deal with external aggression against Japan while Japanese forces, both ground and maritime, would deal with internal threats and natural disasters. Accordingly, in mid-1952, the National Police Reserve was expanded to 110,000 men and named the National Safety Forces.[4]

For a long period, the Japan Ground Self-Defense Force possessed a dubious ability to hold off a Soviet invasion of Hokkaido. Zbigniew Brzezinski observed in 1972 that it seemed optimized to fight ‘a Soviet invasion conducted on American patterns of a quarter of a century ago.’[6] While the force is now an efficient army of around 150,000,[2] its apparent importance had, until recently, seemingly declined with the end of the Cold War, and attempts to reorient the forces as a whole to new post Cold War missions have been tangled in a series of internal political disputes. 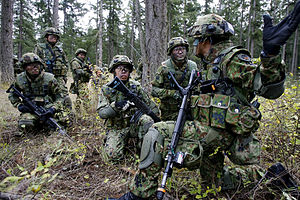 JGSDF soldiers from the 22nd Infantry Regiment train with U.S. Army soldiers in a bilateral exercise at Fort Lewis' Leschi Town in October 2008.

In 1989, basic training for lower-secondary and upper-secondary academy graduates began in the training brigade and lasted approximately three months. Specialized enlisted and non-commissioned officer (NCO) candidate courses were available in branch schools and qualified NCOs could enter an eight-to-twelve-week officer candidate program. Senior NCOs and graduates of an eighty-week NCO pilot course were eligible to enter officer candidate schools, as were graduates of the National Defense Academy at Yokosuka and graduates of all four-year universities. Advanced technical, flight, medical and command and staff officer courses were also run by the JGSDF. Like the maritime and air forces, the JGSDF ran a youth cadet program offering technical training to lower-secondary school graduates below military age in return for a promise of enlistment.

Because of population density and urbanization on the Japanese islands, only limited areas are available for large-scale training, and, even in these areas, noise restrictions are extensive. The JGSDF has adapted to these conditions by conducting command post exercises, map manoeuvres, investing in simulators and other training programs, as well as conducting live fire exercises overseas at locations such as the Yakima Training Center in the United States. 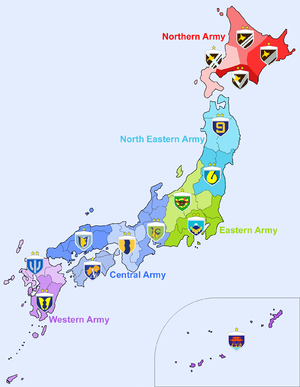 JGSDF Chief of Staff Eiji Kimizuka, speaks with a U.S. Marine officer aboard the USS Essex (LHD-2), in March 2011. 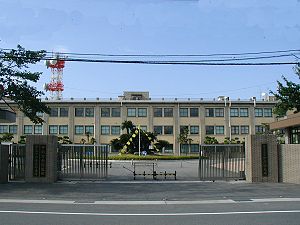 The GSDF consists of the following tactical units: