The Jelling stones are massive carved runestones from the 10th century, found at the town of Jelling in Denmark. The older of the two Jelling stones was raised by King Gorm the Old in memory of his wife Thyra. The larger of the two stones was raised by King Gorm's son, Harald Bluetooth in memory of his parents, celebrating his conquest of Denmark and Norway, and his conversion of the Danes to Christianity. The runic inscriptions on these stones are considered the best known in Denmark.[1] 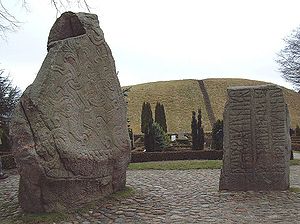 The heritage site: The runestones in the foreground, in front of the church graveyard. In the far background is one of two mounds.

The Jelling stones stand in the churchyard of Jelling church between two large mounds. The stones represent the transitional period between the indigenous Norse paganism and the process of Christianization in Denmark; the larger stone is often cited as Denmark's baptismal certificate (dåbsattest), containing a depiction of Christ.[2] They are strongly identified with the creation of Denmark as a nation state and both stones feature one of the earliest records of the name "Danmark" (in the form of accusative "tanmaurk" ([danmɒrk]) on the large stone, and genitive "tanmarkar" (pronounced [danmarkaɽ]) on the small stone). 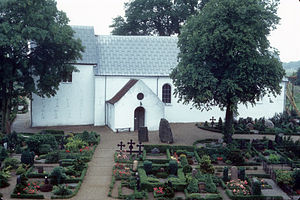 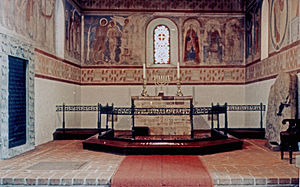 After having been exposed to all kinds of weather for a thousand years cracks are beginning to show. On the 15th of November 2008 experts from UNESCO examined the stones to determine their condition. Experts requested that the stones be moved to an indoor exhibition hall, or in some other way protected in situ, to prevent further damage from the weather.[3]

Heritage Agency of Denmark decided to keep the stones in their current location and selected a protective casing design from 157 projects submitted through a competition. The winner of the competition was Nobel Architects.[4] The glass casing creates a climate system that keeps the stones at a fixed temperature and humidity and protects them from weathering.[5] The design features rectangular glass casings strengthened by two solid bronze sides mounted on a supporting steel skeleton. The glass is coated with an anti-reflective material that gives the exhibit a greenish hue. Additionally, the bronze patina gives off a rusty, greenish colour, highlighting the runestones' gray and reddish tones and emphasising their monumental character and significance.[5] 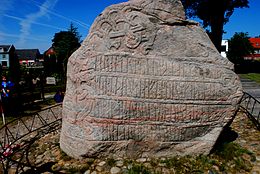 Engraving of an animal on one face of the stone.

The inscription on the larger of the two Jelling stones reads: "King Haraldr ordered this monument made in memory of Gormr, his father, and in memory of Thyrvé, his mother; that Haraldr who won for himself all of Denmark and Norway and made the Danes Christian." (Rundata, DR 42) 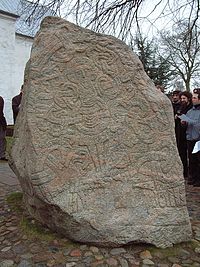 The figure of Christ on Harald's runestone.

The stone has a figure of Jesus Christ on one side and on another side a serpent wrapped around a lion. Christ is depicted as standing in the shape of a cross and entangled in what appear to be branches.[6] One scholar has suggested that this imagery was used to suggest that Christ had replaced the Norse pagan god Odin, who in one myth hung for nine nights in the tree Yggdrasill.[6]

Modern copies of the runestone of Harald Bluetooth

The 1936 sign next to the Utrecht stone with the original runes, transliteration and Dutch translation.

In 1955, a plaster cast of this stone was made for a festival in London. It is now located in the grounds of the Danish Church in London, 4 St. Katherines Precinct, Regents Park, London. The copy is painted in bright colors, like the original. Most of the original paint has flaked away from the original stone, but enough small specks of paint remained to tell us what the colors looked like when they were freshly painted. A copy is also located in the National Museum of Denmark, and another copy, decorated by R. Broby-Johansen in the 1930s, just outside the Jelling museum, which stands within sight of the Jelling mounds.[7] Another copy of this stone was placed in 1936 on the Domplein ('Dom Square') in Utrecht, next to the Cathedral of Utrecht, on the occasion of the 300th anniversary of Utrecht University.

A facsimile of the image of Christ on Harald's runestone appears on the inside front cover of the Danish passport.[8]

The inscription on the older and smaller of the Jelling stones reads: "King Gormr made this monument in memory of Thyrvé, his wife, Denmark's adornment." (Rundata, DR 41) The Old Norse inscription in Younger Futhark runes appears as follows: 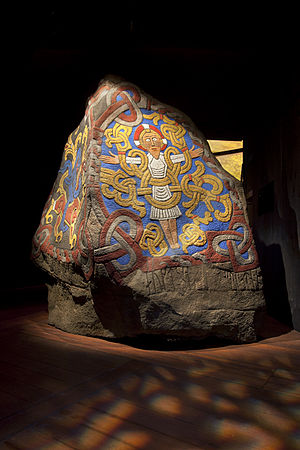