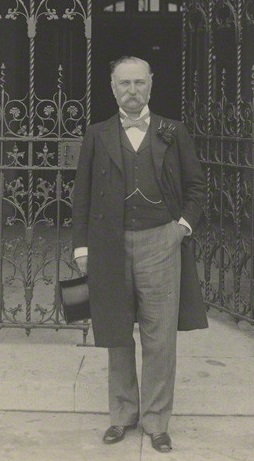 His father, John Maple, had a small furniture shop in Tottenham Court Road, London, and his business began to develop about the time that his son entered it. John Junior soon took over the practical management of the company, and expanded it considerably. The firm became a limited liability company with a capital of two million pounds in 1890, with Maple as chairman. He entered Parliament as Conservative member for Dulwich in 1887, serving until his death in 1903, was knighted in 1892, and was made a baronet in 1897. He was the developer of the Great Central Hotel at Marylebone station, which opened in 1899. In Parliament, he sponsored bills in 1891 and 1893 to encourage cheaper train fares for working men, which would have favoured the many clerks in his constituency who commuted to the City.[1]

He was the owner of Childwick Bury Stud, a large Thoroughbred Horse breeding operation built on his estate. Appearing at first under the name of "Mr. Childwick," from 1885 onwards he won many important races including two of the British Classics. His public benefactions included a hospital and a recreation ground to the city of St Albans, near which his residence, Childwick Bury Manor, was situated, and the rebuilding, at a cost of more than £50,000, of University College Hospital, London. 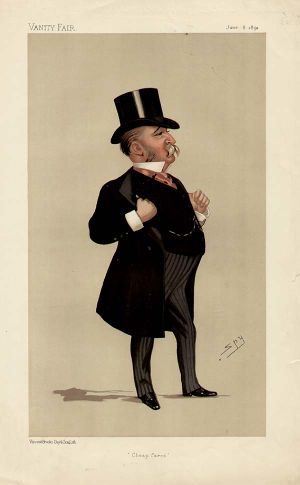 "Cheap fares". Caricature by Spy published in Vanity Fair in 1891

In 1896, his only surviving daughter, Grace Emily (d. 1950), married Baron Hermann von Eckardstein, who was First Secretary of the German Embassy in 1898 and later Ambassador to the Court of St. James.[4] The date of the divorce is unknown, but von Eckardstein sailed in late November 1910 by Cunard Line from Liverpool to New York.[5]

On 16 August 1910 in Metheringham parish church, Lincolnshire, Gracy Emily, still "Baroness von Eckardstein", married William Ernest George Archibald Weigall (1874–1952). Her second husband became MP for Horncastle, Lincs, from 16 February 1911 to 1920, then governor of South Australia 1919–1922, and is better known as Sir Archibald Weigall, 1st Baronet. He was the fifth son of the artist Henry Weigall by his wife Lady Rose Sophia Mary Fane (1834–1921), daughter of John Fane, 11th Earl of Westmorland by his wife Priscilla Wellesley-Pole, a niece of the 1st Duke of Wellington.

Grace Emily, Lady Weigall, lived with her husband in a country house called Petwood at Woodhall Spa, Lincolnshire. Lady Weigall turned her former home into a hotel in 1933 when they moved to Ascot. Petwood is so called because it was originally built at the beginning of the 20th century as a house for Lady Weigall, who had it constructed in her favourite wood, her "pet wood".

Petwood was requisitioned by the RAF during World War II. Towards the end of the war it was used as the Officers' Mess for the famous Dambusters 617 Squadron who were then based at nearby RAF Woodhall Spa. Inside the hotel the Squadron bar is dedicated to the brave men of 617 Squadron and has memorabilia from that period.

Grace Emily Weigall suffered many miscarriages, but bore a daughter, Priscilla, to her second husband.[6]

The Maples furniture business continued for many years, until it went bankrupt in 1997 and was taken over by the retailer Allders.

One of Sir John's great-great-grandsons is actor Jake Weber.