John Kirk CMG KCB (19 December 1832 – 15 January 1922) was a Scottish physician, naturalist, companion to explorer David Livingstone, and British administrator in Zanzibar. He was born in Barry, Angus, near Arbroath, Scotland and is buried in St. Nicholas's churchyard in Sevenoaks, Kent, England. He earned his medical degree from the University of Edinburgh. He was a keen botanist throughout his life and was highly regarded by successive directors of the Royal Botanic Gardens, Kew: William Hooker, Joseph Dalton Hooker and William Turner Thiselton-Dyer.

After the death of Livingstone, Kirk pledged to continue Livingston's work to end the East African slave trade. For years he negotiated with the ruler of Zanzibar, Sultan Bargash, gaining his confidence and promising to help enrich the East African domain through legitimate commerce. The Sultan banned slave trading in 1873 and by 1885, the region was larger and more profitable.

In 1882 he was awarded the Patron's Gold Medal of the Royal Geographical Society for his achievements.[1]

He succeeded Henry Adrian Churchill as British Consul in Zanzibar, after Churchill died in office in 1886.[2] 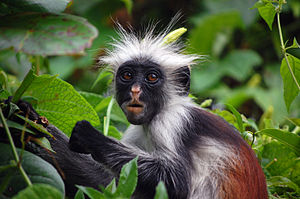 According to sources,[3] Kirk first drew zoologists' attention to the Zanzibar red colobus,[4] which is also commonly known as Kirk's red colobus. This species, Procolobus kirkii, which is endemic to Zanzibar, is named after him.

Also, a species of african lizard, Agama kirkii, is named in his honor.[5]

The standard author abbreviation J.Kirk is used to indicate this individual as the author when citing a botanical name.[6]