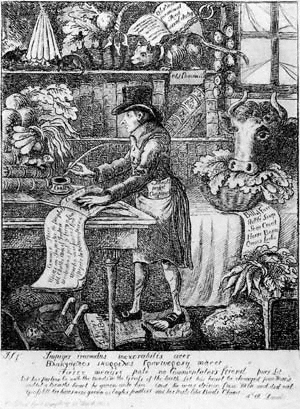 He was born in Stockton-on-Tees, County Durham, of a Westmorland yeoman family. He was educated for the law, mainly by Ralph Bradley the leading conveyancer.[1] He then settled in London as a conveyancer at 22.

He devoted his spare time to literature, and in 1782, he published an attack on Thomas Warton's History of English Poetry. The tone of his Observations, in which Warton was treated as a pretender, charged with cheating and lying to cover his ignorance, caused a sensation in literary circles.

In nearly all the small points with which he dealt, Ritson was in the right, and his corrections have since been adopted, but the unjustly bitter language of his criticisms roused great anger at the time, much, it would appear, to Ritson's delight. In 1783 Samuel Johnson and George Steevens were attacked in the same bitter fashion as Warton for their text of Shakespeare. Bishop Percy was next subjected to a furious onslaught in the preface to a collection of Ancient Songs (printed 1787, dated 1790, published 1792). In a letter (14 March 1803) to Samuel Taylor Coleridge, Robert Southey wrote that “Ritson is the oddest, but most honest of all our antiquarians, and he abuses Percy and Pinkerton with less mercy than justice.”[2]

Ritson spared no pains himself to ensure accuracy in the texts of old songs, ballads and metrical romances which he edited. His collection of the Robin Hood ballads is perhaps his greatest single achievement. However, he gave in to his own political prejudices as a Jacobin when he included the idea, uncommon until then, that Robin Hood robbed the rich and gave to the poor rather than simply robbing the bishops and the Sheriff of Nottingham.[3]

Sir Walter Scott, who admired his industry and accuracy in spite of his temper, was almost the only man who could get on with him. According to Scott, Ritson was "a man of acute observation, profound research, and great labour".[4] On one occasion, when he called in Scott's absence, he spoke so rudely to his wife that he was threatened with being thrown out of the window.

Spelling became one of his eccentricities; in his later books, he increasingly adopted a reformed spelling of his own devising. As early as 1796, Ritson showed signs of mental collapse, and on 10 September 1803, he became completely insane, barricaded himself in his chambers at Gray's Inn, made a bonfire of manuscripts, and was finally forcibly removed to Hoxton, where he died.