From Infogalactic: the planetary knowledge core
Jump to: navigation, search
For the chairman of the Australian Ballet, see Robert Southey (businessman).

Robert Southey (/ˈsaʊði/ or /ˈsʌði/;[1] August 12, 1774 in Bristol – March 21, 1843 in London) was an English poet of the Romantic school, one of the so-called "Lake Poets", and Poet Laureate for 30 years from 1813 to his death in 1843. Although his fame has long been eclipsed by that of his contemporaries and friends William Wordsworth and Samuel Taylor Coleridge, Southey's verse still enjoys some popularity.

Southey was also a prolific letter writer, literary scholar, essay writer, historian and biographer. His biographies include the life and works of John Bunyan, John Wesley, William Cowper, Oliver Cromwell and Horatio Nelson. The last has rarely been out of print since its publication in 1813 and was adapted for the screen in the 1926 British film, Nelson. He was also a renowned scholar of Portuguese and Spanish literature and history, translating a number of works from those two languages into English and writing a History of Brazil (part of his planned History of Portugal, which he never completed) and a History of the Peninsular War. Perhaps his most enduring contribution to literary history is the children's classic The Story of the Three Bears, the original Goldilocks story, first published in Southey's prose collection The Doctor. 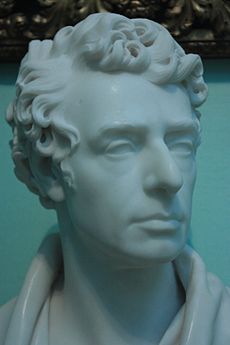 Robert Southey was born in Wine Street, Bristol, England, to Robert Southey and Margaret Hill. He was educated at Westminster School, London, (where he was expelled for writing an article in The Flagellant condemning flogging) and Balliol College, Oxford.[2] Southey later said of Oxford, "All I learnt was a little swimming ... and a little boating."

Experimenting with a writing partnership with Samuel Taylor Coleridge, most notably in their joint composition of The Fall of Robespierre, Southey published his first collection of poems in 1794. The same year, Southey, Coleridge, Robert Lovell and several others discussed creating an idealistic community ("pantisocracy") on the banks of the Susquehanna River in America:[2]

"Their wants would be simple and natural; their toil need not be such as the slaves of luxury endure; where possessions were held in common, each would work for all; in their cottages the best books would have a place; literature and science, bathed anew in the invigorating stream of life and nature, could not but rise reanimated and purified. Each young man should take to himself a mild and lovely woman for his wife; it would be her part to prepare their innocent food, and tend their hardy and beautiful race."

Southey was the first to reject the idea as unworkable, suggesting that they move the intended location to Wales, but when they failed to agree the plan was abandoned.

In 1799 Southey and Coleridge were involved with early experiments with nitrous oxide (laughing gas), conducted by the Cornish scientist Humphry Davy.[3] 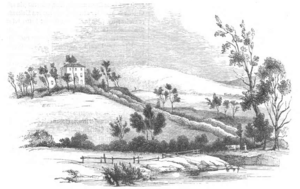 Southey married Edith Fricker at St. Mary Redcliffe, Bristol, on 14 November 1795. She was a sister of Sara Fricker, Coleridge's wife. The Southeys made their home at Greta Hall, Keswick, in the Lake District, living on his tiny income. Also living at Greta Hall and supported by him were Sara Coleridge and her three children, after Coleridge abandoned them, as well as the widow of poet Robert Lovell and her son.

In 1808 Southey met Walter Savage Landor, whose work he admired, and they became close friends. That same year he wrote Letters from England under the pseudonym Don Manuel Alvarez Espriella, an account of a tour supposedly from a foreigner's viewpoint. It is considered to present the most accurate picture of English ways at the beginning of the 19th century.[5]

From 1809, Southey contributed to the Quarterly Review. He had become so well known by 1813 that he was appointed Poet Laureate after Walter Scott refused the post.

In 1819, through a mutual friend (John Rickman), Southey met the leading civil engineer Thomas Telford and struck up a strong friendship. From mid-August to 1 October 1819, Southey accompanied Telford on an extensive tour of his engineering projects in the Scottish Highlands, keeping a diary of his observations. This was published in 1929 as Journal of a Tour in Scotland in 1819. He was also a friend of the Dutch poet Willem Bilderdijk, whom he met twice, in 1824 and 1826, at Bilderdijk's home in Leiden.

In 1837 Southey received a letter from Charlotte Brontë, seeking his advice on some of her poems. He wrote back praising her talents, but also discouraging her from writing professionally. He said "Literature cannot be the business of a woman's life". Years later, Brontë remarked to a friend that the letter was "kind and admirable; a little stringent, but it did me good."

In 1838, Edith died and Southey married Caroline Anne Bowles, also a poet, on 4 June 1839.[6] Southey's mind was giving way when he wrote a last letter to his friend Landor in 1839, but he continued to mention Landor's name when generally incapable of mentioning any one. He died on 21 March 1843 and was buried in the churchyard of Crosthwaite Church, Keswick, where he had worshipped for forty years. There is a memorial to him inside the church, with an epitaph written by his friend, William Wordsworth.

Many of his poems are still read by British schoolchildren, the best-known being The Inchcape Rock, God's Judgement on a Wicked Bishop, After Blenheim (possibly one of the earliest anti-war poems) and Cataract of Lodore.

As a prolific writer and commentator, Southey introduced or popularised a number of words into the English language. The term autobiography, for example, was used by Southey in 1809 in the Quarterly Review in which he predicted an "epidemical rage for autobiography", which indeed has continued to the present day.[7] 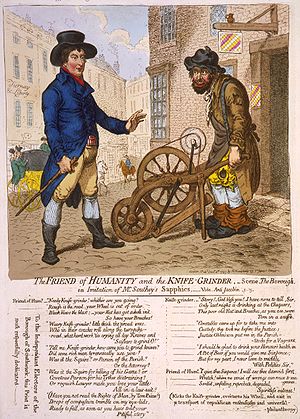 Although originally a radical supporter of the French Revolution, Southey followed the trajectory of his fellow Romantic poets Wordsworth and Coleridge towards conservatism. Embraced by the Tory establishment as Poet Laureate, and from 1807 in receipt of a yearly stipend from them, he vigorously supported the Liverpool government. He argued against parliamentary reform ("the railroad to ruin with the Devil for driver"), blamed the Peterloo Massacre on the allegedly revolutionary "rabble" killed and injured by government troops, and opposed Catholic emancipation. In 1817 he privately proposed penal transportation for those guilty of "libel" or "sedition". He had in mind figures like Thomas Jonathan Wooler and William Hone, whose prosecution he urged. Such writers were guilty, he wrote in the Quarterly Review, of "inflaming the turbulent temper of the manufacturer and disturbing the quiet attachment of the peasant to those institutions under which he and his fathers have dwelt in peace." Wooler and Hone were acquitted, but the threats caused another target, William Cobbett, to emigrate temporarily to the United States.

In some respects, however, Southey was ahead of his time in his views on social reform. For example, he was an early critic of the evils which the new factory system brought to early 19th-century Britain. He was appalled by the conditions of life in towns like Birmingham and Manchester, and especially by the employment of children in factories, and was outspoken in his criticism of these things. He sympathised with the pioneering socialist plans of Robert Owen, advocated that the state promote public works to maintain high employment and called for universal education.[8]

Given his departure from radicalism, and his attempts to have former fellow travellers prosecuted, it is unsurprising that less successful contemporaries who kept the faith attacked Southey. They saw him as a selling out for money and respectability.

In 1817 Southey was confronted with the surreptitious publication of a radical play, Wat Tyler, which he had written in 1794 at the height of his radical period. This was instigated by his enemies in an attempt to embarrass the Poet Laureate and highlight his apostasy from radical poet to supporter of the Tory establishment. One of his most savage critics was William Hazlitt. In his portrait of Southey, in The Spirit of the Age, he wrote: "He wooed Liberty as a youthful lover, but it was perhaps more as a mistress than a bride; and he has since wedded with an elderly and not very reputable lady, called Legitimacy." Southey largely ignored his critics but was forced to defend himself when William Smith, a member of Parliament, rose in the House of Commons on 14 March to attack him. In a spirited response Southey wrote an open letter to the MP, in which he explained that he had always aimed at lessening human misery and bettering the condition of all the lower classes and that he had only changed in respect of "the means by which that amelioration was to be effected."[9] As he put it, "that as he learnt to understand the institutions of his country, he learnt to appreciate them rightly, to love, and to revere, and to defend them."[9]

He was often mocked for what were seen as sycophantic odes to the king, most notably in Byron's long ironic dedication of Don Juan to Southey. In the poem Southey is dismissed as insolent, narrow and shabby. This was based both on Byron's disrespect for Southey's literary talent, and his disdain for what he perceived as Southey's hypocritical turn to conservative politics later in life. The source of much of the animosity between the two men can be traced back to Byron's belief that Southey had spread rumours about him and Percy Shelley being in a "League of Incest" during their time on Lake Geneva in 1816, an accusation that Southey strenuously denied.

In response, Southey attacked what he called the Satanic School among modern poets in the preface to his poem, A Vision of Judgement, written following the death of George III. While not referring to Byron by name, it was clearly directed at him, and Byron retaliated with The Vision of Judgment, a brilliant parody of Southey's poem.

Southey is buried in the churchyard of Crosthwaite Parish Church in Cumbria.[10]

Elected a member of the American Antiquarian Society in 1822.[11]