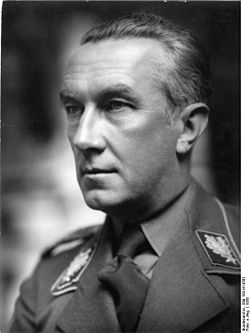 Early life and World War I

Born in Basel, Switzerland, he became an extreme anti-Semite in his youth after reading the anti-Semitic philosophers Joseph Arthur Comte de Gobineau and Houston Stewart Chamberlain. He joined the German military and fought in World War I, twice being wounded, and ended the war as a 2nd Lieutenant.

In 1922, Lippert participated in the assassination of Foreign Minister Walther von Rathenau, and he eventually joined the NSDAP (Nazi Party). He became prominent in the NSDAP due to his rabid anti-Semitism and connection with Joseph Goebbels. In 1933, he was appointed the Reichskommissar of Berlin, purged the capital's government of opposition, and was responsible for much of the early persecution of Jews in Berlin. He was also the head of propaganda in southeastern Germany. He was formally appointed as mayor (city president) of Berlin in 1937, though he had been the city's de facto ruler for seven years.

In 1936, Lippert supervised the Olympics and tried to make a good impression on the tourists. However, his power struggles with more powerful politicians would lead to his downfall. By 1937, Goebbels came to detest Lippert for his behaviour. Finally, in 1940, Lippert argued with Albert Speer over the organization of Berlin, leading to his dismissal on the orders of Adolf Hitler, who had become increasingly hostile to him, writing in a journal entry, “Lippert is an incompetent, an idiot, a failure, a zero.”

His departure from the prominent position led to rumors that Lippert had been executed.[1] He instead joined the Wehrmacht and was transferred to Belgium where he became the commandant of Arlon in 1940. Lippert’s primary role in the war, however, was organizing radio propaganda in Belgrade.

After the war, he was extradited to Belgium in January 1946 for trial. He was sentenced to six years’ hard labor on 29 June 1951, for involvement in war crimes. Although the sentence was increased to eight years in early 1952, he was released on 15 April 1952, since by this time most of his time had been served in Belgian captivity. He was subsequently classified as a Nazi activist by a de-Nazification court. He lectured at universities until his death on 30 June 1956, in Bad Schwalbach.