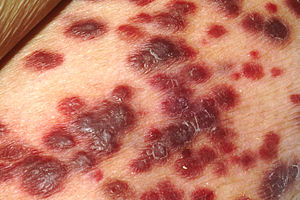 Kaposi's sarcoma-associated herpesvirus (KSHV) is the eighth human herpesvirus; its formal name according to the International Committee on Taxonomy of Viruses (ICTV) is HHV-8. Like other herpesviruses, its informal name (KSHV) is used interchangeably with its ICTV name. This virus causes Kaposi's sarcoma, a cancer commonly occurring in AIDS patients,[1] as well as primary effusion lymphoma[2] and some types of multicentric Castleman's disease. It is one of seven currently known human cancer viruses, or oncoviruses.[1]

In 1872, Moritz Kaposi described a blood vessel tumor[3] (originally called "idiopathic multiple pigmented sarcoma of the skin") that has since been eponymously named Kaposi's sarcoma (KS). KS was thought to be an uncommon tumor of Jewish and Mediterranean populations until it was realized that it is actually quite common throughout sub-Saharan Africa. This led to the first suggestions in the 1950s that this tumor might be caused by a virus. With the onset of the AIDS epidemic in the early 1980s, there was a sudden epidemic resurgence of KS affecting primarily gay and bisexual AIDS patients with up to 50% of reported AIDS patients having this tumor—an extraordinary rate of cancer predisposition. Careful analysis of epidemiologic data by Valerie Beral, Thomas Peterman and Harold Jaffe,[4] led these investigators to propose that KS is caused by an unknown sexually transmitted virus that rarely causes tumors unless the host becomes immunosuppressed, as in AIDS. 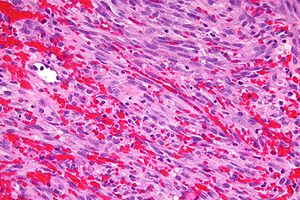 It was first found by Yuan Chang and Patrick S. Moore, a wife and husband team at Columbia University in 1994,[5][6][7] by isolating DNA fragments of a herpesvirus from a Kaposi's sarcoma (KS) tumor in an AIDS patient. As early as 1984, scientists had reported seeing herpesvirus-like structures in KS tumors by electron microscopy. Scientists by then had been searching for the agent causing Kaposi's sarcoma and over 20 agents had been described as the possible cause of KS, including cytomegalovirus and HIV itself. Chang and Moore used representational difference analysis, or RDA, to find KSHV by comparing KS tumor tissue from an AIDS patient to his own unaffected tissue. The idea behind this experiment was that if a virus causes KS, the genomic DNA in the two samples should be precisely identical except for DNA belonging to the virus. In their initial RDA experiment, they isolated two small DNA fragments that represented less than 1% of the actual viral genome. These fragments were similar to but distinct from known herpevirus sequences indicating the presence of a new virus. Starting from these fragments, this research team was then able to sequence the entire genome of the virus less than two years later.

The discovery of this herpesvirus sparked considerable controversy and scientific in-fighting until sufficient data had been collected to show that indeed KSHV was the causative agent of Kaposi's sarcoma.[8] The virus is now known to be a widespread infection of people living in sub-Saharan Africa; intermediate levels of infection occur in Mediterranean populations (including Israel, Saudi Arabia, Italy and Greece) and low levels of infection occur in most Northern European and North American populations. Gay and bi-sexual men are more susceptible to infection (through still unknown routes of sexual transmission) whereas the virus is transmitted through non-sexual routes in developing countries.[citation needed]

KSHV is a herpesvirus, and is a large double-stranded DNA virus with a protein covering that packages its nucleic acids, called the capsid, which is then surrounded by an amorphous protein layer called the tegument, and finally enclosed in a lipid envelope derived in part from the cell membrane. KSHV has a genome which is approximately 165,000 nucleic acid bases in length. It is a rhadinovirus, and is remarkable since it has stolen numerous genes from host cells including genes that encode for complement-binding protein, IL-6, BCL-2, cyclin-D, a G protein-coupled receptor, interferon regulatory factor and Flice inhibitory protein (FLIP), as well as DNA synthesis proteins including dihydrofolate reductase, thymidine kinase, thymidylate synthetase, DNA polymerase and many others. While no other human tumor virus possesses these same genes, other tumor viruses target the same cellular pathways illustrating that at a basic level, all tumor viruses appear to attack the same cellular control pathways, so-called tumor suppressor pathways.[citation needed]

After infection, the virus enters into lymphocytes via macropinosomes where it remains in a latent ("quiet") state expressing the viral latency-associated nuclear antigen, LANA. The virus exists as a naked circular piece of DNA called an episome and uses the cellular replication machinery to replicate itself. LANA tethers the viral DNA to cellular chromosomes, inhibits p53 and retinoblastoma protein and suppresses viral genes needed for full virus production and assembly ("lytic replication"). Various signals such as inflammation may provoke the virus to enter into lytic replication. When this occurs, the viral episome starts replicating itself in the form of linear DNA molecules that are packaged into virus particles which are expelled from the cell, to infect new cells or to be transmitted to a new host. When the virus enters into lytic replication, thousands of virus particles can be made from a single cell, which usually results in death of the infected cell.

The viral genome consists of a ~145 kbase long unique region, encoding all of expressed viral genes, which is flanked by ~20-30 kbases of terminal repeat sequences.[9] Each terminal repeat unit is 801 bp in length, has 85% G+C content and is oriented in a repetitive head-to-tail fashion. During latency, the virus genome depends on the host replication machinery and replicates as closed circular episome ("plasmid") using sequences within the terminal repeats as a replication origin. When the virus reactivates into lytic replication, it is believed that the virus genome is replicated as a continuous linear molecule off from an episome (so called rolling circle model). As each unit genome is replicated, it is cut within the terminal repeat region, and then packaged into a virus particle (virion). The virus then becomes enveloped with a lipid membrane as it transits the nucleus and the cytoplasm to exit the cell. Thus, whereas KSHV genome is circular in the nucleus of latently infected cells, it is packaged into infectious viruses as a linear molecule. Once the virus newly infects a cell, the lipid membrane is shed and the virion travels to the nucleus. The viral genome is released where it recircularizes through a poorly understood process that appears to involve homologous recombination.

The primary viral protein responsible for the switch between latent and lytic replication is the ORF50 Replication Transactivation Activator (RTA). When cell signaling conditions activate the generation of RTA, it in turn activates synthesis of a stereotypic cascade of secondary and tertiary viral proteins that ultimately make components of the virus capsid and also the DNA synthesis enzymes required to replicate the virus genome.[10]

The mechanisms by which the virus is contracted are not well understood. Healthy individuals can be infected with the virus and show no signs or symptoms, due to the immune system's ability to keep the infection in check. Infection is of particular concern to the immunosuppressed. Cancer patients receiving chemotherapy, AIDS patients and organ transplant patients are all at a high risk of showing signs of infection.

Infection with this virus is thought to be lifelong, but a healthy immune system will keep the virus in check. Many people infected with KSHV will never show any symptoms. Kaposi's sarcoma occurs when someone who has been infected with KSHV becomes immunocompromised due to AIDS, medical treatment or very rarely aging.

In countries with low seroprevalence, HHV-8 is primarily limited to AIDS and KS patients.[20] In countries with high seroprevalence, infection is frequent in childhood,[21] indicating a likely mother-to-child transmission.[22] In a Zambian survey, all children with KS had mothers who were positive for HHV-8, whereas not all children whose mothers had KS were HHV-8 positive.[23] In another Zambian survey, 13.8% of children were seropositive for HHV-8 by age 4.[19] Seroprevalence has not been shown to vary significantly because of gender or marital status.[16]

Since persons infected with KSHV will asymptomatically give the virus, caution should be used by sex partners in having unprotected sex and activities where saliva might be shared during sexual activity. Prudent advice is to use condoms when needed and avoid deep kissing with partners with KSHV and HIV infections or whose status is unknown. Blood tests to detect to detect antibodies to virus exist.

Kaposi's sarcoma is usually a localized tumor that can be treated either surgically or through local irradiation. Chemotherapy with drugs such as liposomal anthracyclines or paclitaxel may be used, particularly for invasive disease. Antiviral drugs, such as ganciclovir, that target the replication of herpesviruses such as KSHV have been used to successfully prevent development of Kaposi's sarcoma,[24] although once the tumor develops these drugs are of little or no use. For patients with AIDS-KS, the most effective therapy is highly active antiretroviral therapy to reduce HIV infection.[25] AIDS patients receiving adequate anti-HIV treatment may have up to a 90% reduction in Kaposi's sarcoma occurrence.