From Infogalactic: the planetary knowledge core
Jump to: navigation, search
File:Knights of labor seal.gif
The Seal of the Knights of Labor

The Knights of Labor (K of L), officially Noble and Holy Order of the Knights of Labor, was the largest and one of the most important American labor organizations of the 1880s. Its most important leader was Terence V. Powderly. The Knights promoted the social and cultural uplift of the workingman, rejected socialism and anarchism, demanded the eight-hour day, and promoted the producers ethic of republicanism. In some cases it acted as a labor union, negotiating with employers, but it was never well organized, and after a rapid expansion in the mid-1880s, it suddenly lost its new members and became a small operation again.

It was founded by Uriah Stephens on December 28, 1869,[1] reached 28,000 members in 1880, then jumped to 100,000 in 1884. By 1886 20% of all workers were affiliated with the KOL, ballooning to nearly 800,000 members.[2] Its frail organizational structure could not cope as it was battered by charges of failure and violence and calumnies of the association with the Haymarket Square riot. Most members abandoned the movement in 1886-87, leaving at most 100,000 in 1890. Many of them chose to join groups that helped to identify their specific need, instead of the KOL that addressed many different types of issues.[2] Furthermore, the Panic of 1893 terminated the Knights of Labor's importance.[3] Remnants of the Knights of Labor continued in existence until 1949, when the group's last 50-member local dropped its affiliation. 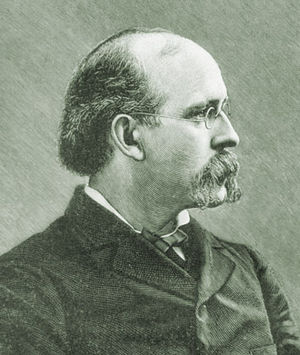 Terence Powderly, Grand Master Workman of the Knights of Labor during its meteoric rise and precipitous decline.

In 1870, Daniel Spahr and his friend, Sam Catri, the lead member of the Philadelphia tailors' union, headed by Uriah Smith Stephens, established a secret union under the name the Noble Order of the Knights of Labor. The collapse of the National Labor Union in 1873 left a vacuum for workers looking for organization. The Knights became better organized with a national vision when they replaced Stephens with Terence V. Powderly. The body became popular with Pennsylvania coal miners during the economic depression of the mid-1870s, then it grew rapidly.[4] The KOL was a diverse industrial union open to all workers. The leaders felt that it was best to have a versatile population in order to get points of view from all aspects. Its members included low skilled workers, railroad workers, immigrants, and steel workers.[5]

As membership expanded, the Knights began to function more as a labor union and less like a fraternal organization. Local assemblies began not only to emphasize cooperative enterprises, but to initiate strikes to win concessions from employers. Powderly opposed strikes as a "relic of barbarism," but the size and the diversity of the Knights afforded local assemblies a great deal of autonomy.

In 1882, the Knights ended their membership rituals and removed the words "Noble Order" from their name. This was to mollify the concerns of Catholic members and the bishops who wanted to avoid any resemblance to freemasonry.[6] Though initially averse to strikes as a method to advance their goals, the Knights aided various strikes and boycotts. The Wabash Railroad strike in 1885 was also a significant success, as Powderly finally supported what became a successful strike on Jay Gould's Wabash Line. Gould met with Powderly and agreed to call off his campaign against the Knights of Labor, which had caused the turmoil originally. These positive developments gave momentum and a surge of members, so by 1886, the Knights had over 700,000 members.

The Knights' primary demand was for an eight-hour day; they also called for legislation to end child and convict labor, as well as a graduated income tax. They were eager supporters of cooperatives. The only woman to hold office in the Knights of Labor, Leonora Barry worked as an investigator and described the horrific conditions in factories, conditions tantamount to the abuse of women and children. These reports made Barry the first person to collect national statistics on the American working woman.[7]

Powderly and the Organization tried to avoid divisive political issues, but in the early 1880s, many Knights were had become followers of Henry George's radical ideology known now as georgism. In 1883, Powderly officially recommended George's book and announced his support of "single tax" on land values. During the New York mayoral election of 1886, Powderly was able to successfully push the organization in an even more Georgist direction.[8]

The Knights of Labor was an organization that helped to join together many different types of people from all different walks of life; for example Catholic and Protestant Irish-born workers. The KOL was appealing to them because they worked very closely with the Irish Land League.[9] The Knights of Labor had a mixed history of inclusiveness and exclusiveness, accepting women and blacks (after 1878) and their employers as members, and advocating the admission of blacks into local assemblies, but tolerating the segregation of assemblies in the South. Bankers, doctors, lawyers, stockholders, and liquor manufacturers were excluded because they were considered unproductive members of society. Asians were also excluded, and in November 1885, a branch of the Knights in Tacoma, Washington worked to expel the city's Chinese, who amounted to nearly a tenth of the overall city population at the time. The Knights were also responsible for race riots that resulted in the deaths of about 28 Chinese Americans in the Rock Springs massacre in Wyoming.[citation needed] While an estimated 50 African-American sugar-cane laborers displaced by a strike led by the Knights were murdered by strikebreaking thugs in the 1887 Thibodaux massacre in Louisiana.[citation needed] The Knights strongly supported the Chinese Exclusion Act of 1882 and the Contract Labor Law of 1885, as did many other labor groups, although the group did accept most others, including skilled and unskilled women of any profession.

File:Sovereign-J-R-1894.jpg
J.R. Sovereign, Grand Master Workman of the Knights of Labor from 1893.

The Knights of Labor attracted many Catholics, who were a large part of the membership, perhaps a majority. Powderly was a Catholic. However, the Knights's use of secrecy, similar to the Masons, during its early years concerned many bishops. The Knights used secrecy and deception to help prevent employers from firing members. After the Archbishop of Quebec condemned the Knights in 1884, twelve American archbishops voted 10 to 2 against doing likewise in the United States. Furthermore, Cardinals James Gibbons and John Ireland defended the Knights. Gibbons went to the Vatican to talk to the hierarchy.[5]

Though often overlooked, the Knights of Labor contributed to the tradition of labor protest songs in America. The Knights frequently included music in their regular meetings, and encouraged local members to write and perform their work. In Chicago, James and Emily Talmadge, printers and supporters of the Knights of Labor, published the songbook "Labor Songs Dedicated to the Knights of Labor" (1885). The song "Hold the Fort" [also "Storm the Fort"], a Knights of Labor pro-labor revision of the hymn by the same name, became the most popular labor song prior to Ralph Chaplin's IWW anthem "Solidarity Forever". Pete Seeger often performed this song and it appears on a number of his recordings. Songwriter and labor singer Bucky Halker includes the Talmadge version, entitled "Labor's Battle Song," on his CD Don't Want Your Millions (Revolting Records 2000). Halker also draws heavily on the Knights songs and poems in his book on labor song and poetry, For Democracy, Workers and God: Labor Song-Poems and Labor Protest, 1865-1895 (University of Illinois Press, 1991).