Palacio de La Moneda (Spanish: [paˈlasjo ðe la moˈneða], Coin Palace), or simply La Moneda, is the seat of the President of the Republic of Chile. It also houses the offices of three cabinet ministers: Interior, General Secretariat of the Presidency and General Secretariat of the Government. It occupies an entire block in downtown Santiago, in the area known as Civic District between Moneda (North Side), Morandé (East), Alameda del Libertador Bernardo O'Higgins (South) and Teatinos street (West).[2]

La Moneda, originally a colonial mint (Moneda means coin), was designed by Italian architect Joaquín Toesca.[1] Construction began in 1784 and was opened in 1805,[1] while still under construction. The production of coins in Chile took place at La Moneda from 1814 to 1929. 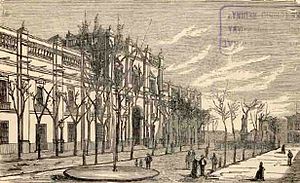 La Moneda Palace in 1872, as pictured by Recaredo Santos Tornero in Chile Ilustrado

During the military coup d'état on September 11, 1973, the Chilean Air Force bombarded the palace at the request of the army. Reconstruction and restoration projects were completed on March 11, 1981, although some bullet marks have been preserved and can still be seen nowadays. During the 1973-1980 restorations, an underground office complex (the so-called "bunker") was built under the front square to provide a safe escape for then-President General Augusto Pinochet in case of an attack.

During President Ricardo Lagos's administration, the palace's inner courtyards were opened to the public during certain hours of the day. Lagos also re-opened Morandé 80 — a gate used by Chilean presidents to enter the palace since the early 20th century. It was eliminated during the restoration of the palace as not being in the original plans, but was restored because of the heavy symbolism attached to it as being the gate through which Chilean Presidents entered La Moneda skipping the main's gate guard protocol or, in other words, as ordinary citizens of the Republic. It was also the gate through which the body of President Allende was taken out after the 1973 coup.

A traditional changing of the guard ceremony takes place every two days [3] on odd-numbered day in odd-numbered months, even-numbered days in even-numbered months, including Sundays, at 10 a.m. weekdays and 11 a.m. on weekends (as of June 2015).[4] A formal ceremony dating back to the 1850s, it lasts about 30 minutes and includes a band playing, troops with horses parading into the square, and much pomp and circumstance.

Free guided tours of the palace are available at the La Moneda website and are given in several languages. They must be requested at least seven days in advance.[5]

Joaquín Toesca had worked on many public buildings in colonial Chile, including the Santiago Metropolitan Cathedral, before he was engaged to design the new royal mint that would become the Palacio de la Moneda.

Works on the building started in 1784, with building materials arriving the following year from around Chile and the world: limestone from the Polpaico country estate; sand from the Maipo River; red stones from a quarry at the Cerro San Cristóbal in Santiago; white stone from the neighbouring Cerro Blanco; oak and cypress wood from Valdivia; Spanish metal works from Vizcaya. Twenty varieties of brick were baked in Santiago for the construction of lintels, comers, floors, moldings, and of the solid walls more than a meter thick.[6]

Toesca died in 1799, before seeing his work finished, and military engineer Agustin Cavallero took over the project. The “Mint House of Santiago de Chile” finally opened in 1805.[6]

The Palacio de la Moneda is built in a pure neoclassical style with Roman Doric influences. The building’s wide, horizontal shape and rectangular composition conveys strength and stability, according to the palace’s listing on the UNESCO website. Its main façade faces Moneda street, and its rooms are distributed along the transverse and longitudinal axes forming several patios.[6]

Behind this façade lie three patios: the Patio de los Cañones, which functions as an entrance hall; a covered patio; and finally the Patio de los Naranjos, where presidential ceremonies take place.

The architecture website ARQHYS.com states that the Palacio de la Moneda is “the only structure in the pure Italian neoclassical style that exists in Latin America.” [7]

The building has been subject to several modifications throughout the years, made by different presidents. The last great restoration of the building was carried out after the 1973 military coup, when large portions of the building were destroyed or damaged.[6]

To celebrate the bicentenary of Chile’s independence in 2010, a new public square called the Plaza de la Ciudadanía (‘’Citizenry Square’’ in Spanish) was constructed on the south side of the palace stretching down to the Avenida Libertador General Bernardo O'Higgins or “Alameda”. Construction began in May 2004 and the plaza was inaugurated in December 2005.

Designed by Undurraga Devés Arquitectos, the Plaza de la Ciudadanía has been called “one of the most important public works in the last century” by Chile’s Plataforma Arquitectura website.[8] Paths leading down from the plaza give access to the underground Palacio de La Moneda Cultural Center, which hosts a range of exhibitions on Chilean culture and history.[9]