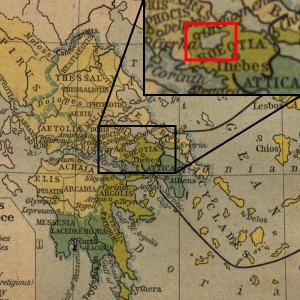 Location of Lake Copais in antiquity.

Lake Copais, Kopais, or Kopaida (Ancient Greek: Κωπαΐς; Modern Greek: Κωπαΐδα) is a former lake in the centre of Boeotia, Greece, west of Thebes. It was drained in the late 19th century. The area where it was located, though now a plain, is still known as Kopaida. 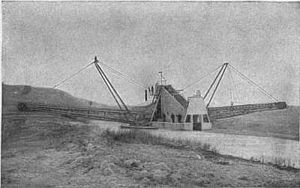 When the lake existed, the towns of Aliartos (ancient Haliartus), Orchomenus, and Chaeronea were on its shores. Rivers feeding the lake included the Cephissus, Termessus and Triton. The lake was (and is) surrounded by fertile land, but the lake increasingly encroached on the surrounding land because of inadequate drainage. In response to this, in 1867–87 Scots and French engineers reclaimed the land for the British Lake Copais Company, by building channels to drain water from the lake to the Cephissus and from there to Lake Yliki (Ylíki Limní, ancient Hylica). In total about 200 square kilometres (77 sq mi) were reclaimed. This land was returned to the Greek government in 1952.[1]

The Kopais Lake Agency was created in 1957 to supervise the draining of the lake and building of a new road. The task was completed that same year, but the agency with full-time staff of 30 (including a driver for the president of the agency) still existed until 2010.[2][3]

Before this the lake drained into the sea by numerous subterranean channels. Some of these channels were artificial, as the 1st century geographer Strabo recorded.[4] Modern excavation has found enormous channels dug in the 14th century BC which drained water into the sea to the northeast;[5] Strabo mentions work being done on these channels by an engineer named Crates of Chalcis in the time of Alexander the Great. 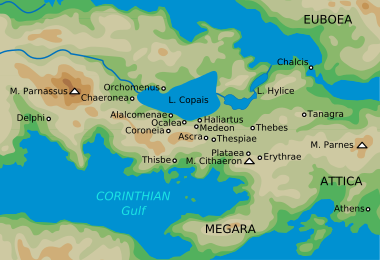 Homer and other ancient authors refer to Copais as the "Cephisian lake", named for the river Cephissus.[6] Strabo, however, argues that the poetic expression refers to the smaller Lake Hylice (the modern Lake Yliki), between Thebes and Anthedon.[7]

There was a legend that the lake came into being when the hero Heracles flooded the area by digging out a river, the Cephissus, which poured into the basin.[8] Polyaenus explains that he did this because he was fighting the Minyans of Orchomenus: they were dangerous horseback fighters, and Heracles dug the lake in order to unhorse them.[9] Another story has the lake overflow in the mythical time of Ogyges, resulting in the Ogygian deluge.[10]

The travel writer Pausanias and the 5th century BC comic playwright Aristophanes record that in antiquity Lake Copais was known for its fish, especially the eels.[11]