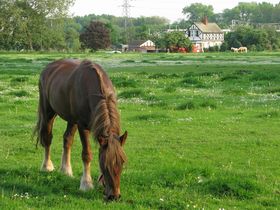 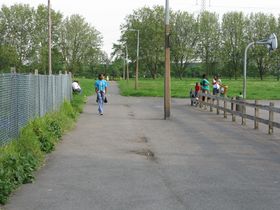 Playgrounds near the Seymour Road entrance

Leyton Marsh is located in Leyton in the London Borough of Waltham Forest.

The marsh is bordered by the Walthamstow Marshes to the north, and by Coppermill Fields, the Lee Navigation and the River Lee Flood Relief Channel. Much of the original area has been taken over for other uses. The remaining open land is split into two distinct areas:

Other areas which were historically part of Leyton Marshes are now put to other uses:

Lammas Lane, despite historic associations, is buried in an industrial estate alongside the railway.[3] 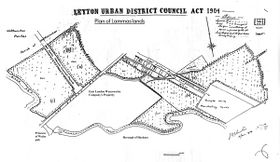 Leyton Marsh was originally more extensive open marsh, historically drained by means of open drainage ditches. The marsh is former Lammas Land: the land was divided into strips, which were cultivated to grow hay for winter feed. Parishioners had ancient rights to graze cattle and horses between 1 August (after the hay harvest) and 25 March.[5][6]

In the 19th century the marsh was polluted by sewage from the extensive new residential developments in Walthamstow and Leyton.

By the 19th century the character of the marsh changed. Many acres were bought and built on by railway, water and gas companies. In the early 1890s the East London Waterworks Company erected fences, which angered local people. On Lammas Day in 1892, a large demonstration took place on the marsh and the fences were taken down. The locals set up the Leyton Lammas Lands Defence Committee and successfully challenged the water company in court. This led to the Leyton Urban District Council Act 1904, which provided that the marsh would be kept as an open space, in return for local people giving up Lammas rights.[7][5] The fields at Marsh Lane did not come under this agreement and remain as Lammas land.[8]

During World War II, a V-2 rocket landed and exploded on the marsh; the crater is still visible seven decades later.[9] After the war, the marsh was used to dump rubble from The Blitz.

Recent history and current use 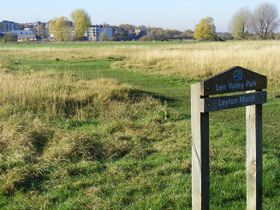 Part of Leyton Marsh, restored after use for the 2012 Olympics

The New Lammas Lands Defence Committee, a revival of the earlier organisation, is currently active in promoting, and on occasion defending, the public use of the marsh. Events include organised walks, with an annual highlight on 13 March: beating the bounds, an ancient ritual defining the boundaries of the land where grazing rights were enjoyed.

Parts of Leyton Marshes were used for the 2012 London Olympic and Paralympic Games, despite some local opposition. A temporary basketball training venue was built on Porter's Field Meadow for the games, which was opposed by members of Save Lea Marshes.[10] [11][12] The venue was dismantled after the Paralympic Games, the Olympic Delivery Authority being required to return the open space to its original state. In addition, on the request of the local user group, the Lee Valley Regional Park Authority committed to spending £65,000 on improving Leyton Marsh, including pathways and seating, as well as introducing habitats to attract existing and new species of wildlife into the area.