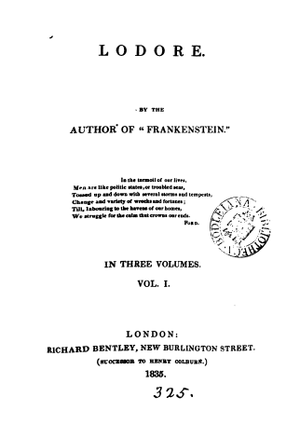 Lodore, also published under the title The Beautiful Widow, is the penultimate novel by Romantic novelist Mary Shelley, completed in 1833 and published in 1835.[1]

In Lodore, Shelley focused her theme of power and responsibility on the microcosm of the family.[2] The central story follows the fortunes of the wife and daughter of the title character, Lord Lodore, who is killed in a duel at the end of the first volume, leaving a trail of legal, financial, and familial obstacles for the two "heroines" to negotiate. Mary Shelley places female characters at the centre of the ensuing narratives: Lodore's daughter, Ethel, raised to be over-dependent on paternal control; his estranged wife, Cornelia, preoccupied with the norms and appearances of aristocratic society; and the intellectual and independent Fanny Derham, with whom both are contrasted.[3]

The novel's modern editor, Lisa Vargo, has noted the text's engagement with political and ideological issues, particularly the education and social role of women.[4] She suggests that Lodore dissects a patriarchal culture that separated the sexes and pressured women into dependence on men.[5] In the view of critic Betty T. Bennett, "the novel proposes egalitarian educational paradigms for women and men, which would bring social justice as well as the spiritual and intellectual means by which to meet the challenges life invariably brings".[6]

Lodore was a success with the reviewers: Fraser's Magazine praised its "depth and sweep of thought", for example; and it prompted The Literary Gazette to call Mary Shelley "one of the most original of our modern writers".[7] Later nineteenth-century critics were more dubious: in 1886, Edward Dowden called Lodore "biography transmuted for the purposes of fiction"; in 1889, Florence Marshall remarked that Lodore was "written in a style that is now out of date".[8] It was believed for instance that Ethel's encounter with Clorinda Saville was based upon Emilia Viviani.[9][dubious – discuss]