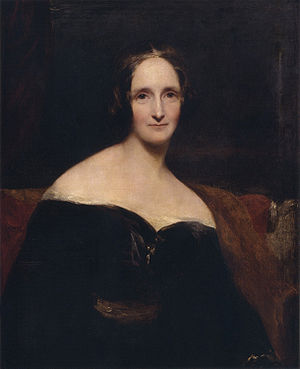 Mary Shelley, painted by Richard Rothwell and shown at the Royal Academy in 1840

"The Mortal Immortal" is a short story from 1833 written by Mary Shelley. It tells the story of a man named Winzy who becomes immortal which, at first glance appears to work in his favour promising him eternal tranquility. However, it soon becomes apparent that he is cursed to live forever in a torturous existence.

Winzy becomes immortal after drinking an elixir belonging to his mentor, the alchemist Cornelius Agrippa. His mentor soon dies, as does his one love Bertha. Over the years his health gradually worsens and his mentality comes into question. At the start of the story, the narrator claims more than three hundred and twenty-three years have passed since he drank the elixir at the age of twenty.

The story was commissioned in 1833 for The Keepsake, a prominent literary annual which married short fiction with high-quality engraved artworks. It was one of a number of similar commissions; Shelley sold twenty-one stories to annuals over a seventeen-year period, with more than half of those in The Keepsake.[1] For this story, Shelley was given an engraving titled Bertha, from a painting by Henry P. Briggs, showing a young man and young woman helping an elderly lady descend a staircase.[2] She chose to write a story based around the idea of an immortal male narrator, seeing his wife both as a young woman and as the old woman she becomes.

"The Mortal Immortal" is considered to be an example of the Godwinian confessional narrative. [3] The story has been linked to St. Leon, a 1799 novel by Shelley's father, William Godwin. Godwin's novel had established the idea of a tragic immortal protagonist, possessed of exceptional powers but unable to use them well. Shelley had developed this theme in Frankenstein (1818). In "The Mortal Immortal", she applied a comic twist – the protagonist had become immortal by accident – and played on the ways that the narrator's immortality drove him and his wife apart from society.[4]

Another source can be found in Apuleius' The Golden Ass, a second-century Latin satire, in which a miraculous transformation also relies on an accidental potion; Shelley is known to have translated it, at the instigation of her husband, in 1817.[5]

The title stems from "Endymion", a poem by John Keats.[6]

The story was originally published in The Keepsake for 1834 (Dec. 1833), a literary annual. It was later republished in 1873, as part of the The Casquet of Literature, being a Selection of Prose and Poetry from the Works of the Most Admired Authors, edited by Charles Gibbon,[7] and reappeared in similar editions in 1890, 1891 and 1896, both in London and Philadelphia. During the 1930s, it was published in three separate collections of "thrillers", and in 1974 in the Masterpieces of Science Fiction series. Editions of it were later included in two scholarly collections of Shelley's work, in 1976 and 1990,[8] as well as in a Norton Anthology.[9] In 1996, it was used as the title story in a collected edition of Shelley's supernatural short stories.[10]

The Italian author Iginio Ugo Tarchetti, one of the first Gothic novelists practicing in Italian and a prominent member of the Scapigliatura movement, wrote an Italian version of the story, as Il mortale immortale; later critics have noted that this version bears such a close resemblance to the original that it is in effect an unauthorised and unattributed translation.[11]

A sequel to the story was written by Gary Jennings in 1973, published in Fantasy and Science Fiction as Ms. Found In An Oxygen Bottle.[8]

The use of alchemy, science and supernatural occurrences in other of Shelley's work such as Frankenstein, Valerius the Reanimated Roman and Roger Dodsworth.

Despite the potential audience and the high quality of the authors involved, the Keepsake stories were seen as unimpressive by contemporary reviewers. The Gentleman's Magazine described them as "none of any remarkable interest..." and described the Mortal Immortal itself as "a tissue of monstrous and appalling impossibilities".[12]

Some modern critics have described it, along with the other Keepsake stories, simply as commercial hackwork,[13] while others have seen it as highlighting her "gift for humour",[14] and as a "vigorously inventive" quasi-autobiographical piece.[9]