London Bridge Is Falling Down

"London Bridge Is Falling Down" (also known as "My Fair Lady" or simply "London Bridge") is a traditional English nursery rhyme and singing game, which is found in different versions all over the world. It deals with the depredations of London Bridge and attempts, realistic or fanciful, to repair it. It may date back to bridge rhymes and games of the late Middle Ages, but the earliest records of the rhyme in English are from the seventeenth century. The lyrics were first printed in close to its modern form in the mid-eighteenth century and became popular, particularly in Britain and the United States in the nineteenth century.

The modern melody was first recorded in the late nineteenth century and the game resembles arch games of the Middle Ages, but seems to have taken its modern form in the late nineteenth century. It has a Roud Folk Song Index number of 502. Several theories have been advanced to explain the meaning of the rhyme and the identity of the "fair lady" of the refrain. The rhyme is one of the most well known in the world and has been referenced in a variety of works of literature and popular culture. 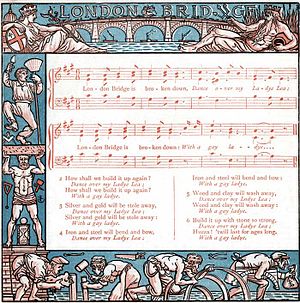 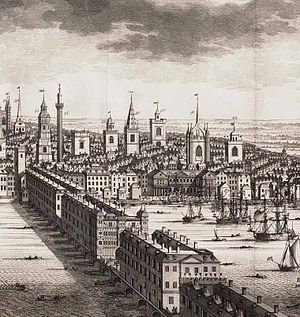 A prospect of Old London Bridge in 1710. 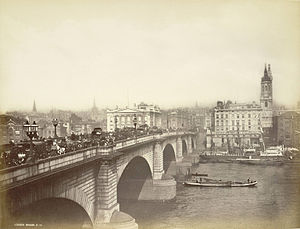 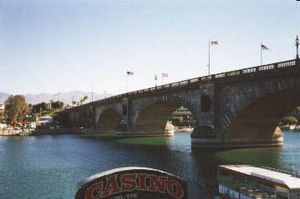 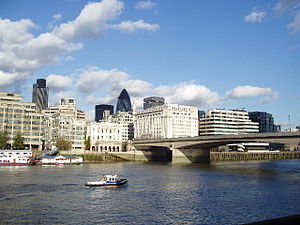 There is considerable variation in the lyrics of the rhyme. The most frequently used first verse is:

In the version quoted by Iona and Peter Opie in 1951 the full lyrics were:

The rhyme is constructed of quatrains in trochaic tetrameter catalectic,[3] (each line made up of four metrical feet of two syllables, with the stress falling on the first syllable in a pair; the last foot in the line missing the unstressed syllable), which is common in nursery rhymes.[4] In its most common form it relies on a double repetition, rather than a rhyming scheme, which is a frequently employed device in children's rhymes and stories.[5] The Roud Folk Song Index, which catalogues folk songs and their variations by number, classifies the song as 502.[6]

The melody now most associated with the rhyme.

A melody is recorded for "London Bridge" in an edition of John Playford's The Dancing Master published in 1718, but it differs from the modern tune and no lyrics were given. An issue of Blackwood's Magazine in 1821 noted the rhyme as a being sung to the tune of "Nancy Dawson", now better known as "Nuts in May" and the same tune was given in Richard Thomson's Chronicles of London Bridge (1827).[2]

Another tune was recorded in Samuel Arnold's Juvenile Amusements in 1797. E. F. Rimbault's Nursery Rhymes (1836) has the same first line, but then a different tune.[1] The tune now associated with the rhyme was first recorded in 1879 in the US in A. H. Rosewig's Illustrated National Songs and Games.[7] 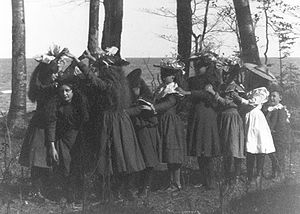 The rhyme is often used in a children's singing game, which exists in a wide variety of forms, with additional verses. Most versions are similar to the actions used in the rhyme "Oranges and Lemons". The most common is that two players hold hands and make an arch with their arms while the others pass through in single file. The "arch" is then lowered at the song's end to "catch" a player. In the United States it is common for two teams of those that have been caught to engage in a tug of war.[2] In England until the nineteenth century the song may have been accompanied by a circle dance, but arch games are known to have been common across late medieval Europe.[1]

Five of nine versions published by Alice Gomme in 1894 included references to a prisoner who has stolen a watch and chain. This may be a late nineteenth century addition from another game called "Hark the Robbers",[8] or "Watch and Chain". This rhyme is sung to the same tune and may be an offshoot of "London Bridge" or the remnant of a distinct game. In one version the first two verses have the lyrics:

Detail from Philippe Pigouchet's Heures a lusaige de Paris (1497), showing an arch game similar to that known to be associated with the rhyme from the late nineteenth century. 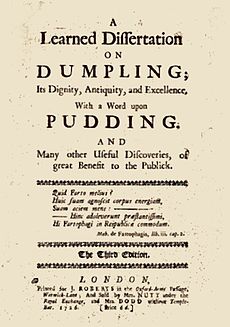 The cover of the third edition of Dumpling and Pudding, which contains Henry Carey's satire "Namby Pamby" (1725), one of the earliest surviving works to refer to the rhyme.

Similar rhymes can be found across Europe, pre-dating the records in England. These include "Knippelsbro Går Op og Ned" from Denmark, "Die Magdeburger Brück" from Germany, "pont chus" from sixteenth-century France; and "Le porte", from fourteenth-century Italy. It is possible that the rhyme was acquired from one of these sources and then adapted to fit the most famous bridge in England.[2]

One of the earliest references to the rhyme in English is in the comedy The London Chaunticleres, printed in 1657, but probably written about 1636,[9] in which the dairy woman Curds states that she had "danced the building of London-Bridge" at the Whitsun Ales in her youth, although no words or actions are mentioned.[1] Widespread familiarity with the rhyme is suggested by its use by Henry Carey in his satire Namby Pamby (1725), as:

Namby Pamby is no Clown,

London Bridge is broken down:
Now he courts the gay Ladee
Dancing o'er The Lady-Lee.[1]

The oldest extant version could be that recalled by a correspondent to the Gentleman's Magazine in 1823, which he claimed to have heard from a woman who was a child in the reign of Charles II (r. 1660–85) and had the lyrics:

The subsequent verses followed this form, each repeating in the lines below in place of "London bridge is broken down":

The earliest printed English version is in the oldest extant collection of nursery rhymes, Tommy Thumb's Pretty Song Book, printed by John Newbery in London (c. 1744), with the following text: 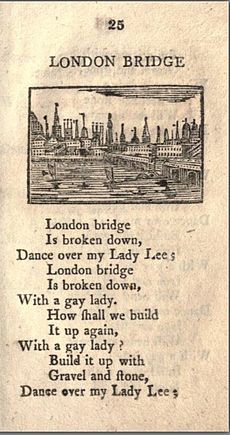 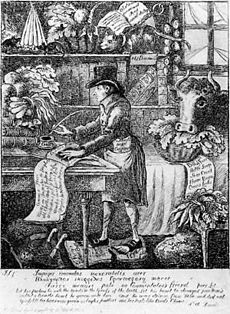 James Ritson, whose Gammer Gurton's Garland contains one of the earliest versions of the rhyme (Engraving by James Sayers, published in 1803).

How shall we build
It up again,
Dance over my Lady Lee, &c.

Build it up with
Gravel, and Stone,
Dance over my Lady Lee, &c.

Gravel, and Stone,
Will wash away,
Dance over my Lady Lee, &c.

Build it up with
Iron, and Steel,
Dance over my Lady Lee, &c.

Iron, and Steel,
Will bend, and Bow,
Dance over my Lady Lee, &c.

Build it up with
Silver, and Gold,
Dance over my Lady Lee, &c.

Silver, and Gold
Will be stolen away,
Dance over my Lady Lee, &c.

A version from James Ritson's Gammer Gurton's Garland (1784) is similar but replaces the last verse with:

Build it up with stone so strong,
Dance o'er my Lady lee,
Huzza! 'twill last for ages long,
With a gay lady.[2] 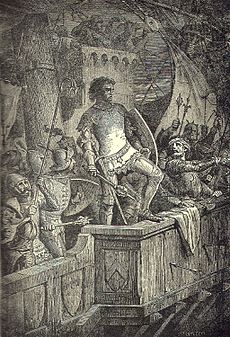 Cnut the Great's men on the London bridge, under attack by Olaf II of Norway from a Victorian children's book published in 1894.

The meaning of the rhyme is not certain. It may simply relate to the many difficulties experienced in bridging the River Thames, but a number of alternative theories have been put forward.

One theory of origin is that the rhyme relates to the supposed destruction of London Bridge by Olaf II of Norway in 1014 (or 1009).[10] The nineteenth-century translation of the Norse saga the Heimskringla, published by Samuel Laing in 1844, included a verse by Óttarr svarti, that looks very similar to the nursery rhyme:

However, modern translations make it clear that Laing was using the nursery rhyme as a model for his very free translation, and the reference to London Bridge does not appear at the start of the verse and it is unlikely that this is an earlier version of the nursery rhyme.[11] Some historians doubt that the attack ever took place.[12] 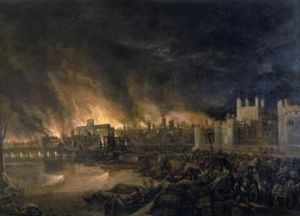 Detail of the Great Fire of London 1666 by an unknown painter. The Tower of London is on the right and London Bridge on the left.

The theory that the song refers to the burying, perhaps alive, of children in the foundations of the bridge was first advanced by Alice Bertha Gomme (later Lady Gomme) in The Traditional Games of England, Scotland and Ireland (1894–1898) and perpetuated by the usually sceptical Iona and Peter Opie.[11] This was based around the idea that a bridge would collapse unless the body of a human sacrifice were buried in its foundations and that the watchman is actually a human sacrifice, who will then watch over the bridge. However, there is no archaeological evidence for any human remains in the foundations of London Bridge.[11]

According to Walt Disney's The Truth About Mother Goose (1957) the rhyme refers to the deterioration of the original London Bridge (built in 1176, which had been considered a wonder of the world) due to a combination of age and the Great Fire of London of 1666.[13] Until the mid-eighteenth century the Old London Bridge was the only crossing on the Thames in London. It was damaged in a major fire in 1633, but in the fire of 1666 this damage acted as a fire break and prevented the flames from further damaging the bridge and crossing to the south side of the Thames. With its 19 narrow arches, it impeded river traffic and flow. Central piers were removed to create a wider navigational span. Widening and the removal of its houses was completed in 1763, but it remained relatively narrow and needed continual and expensive repairs.

In the early nineteenth century it was decided to replace the bridge with a new construction. New London Bridge was opened in 1831 and survived until it was replaced in 1972. It was then transported and reconstructed in Lake Havasu City, Arizona.[14] 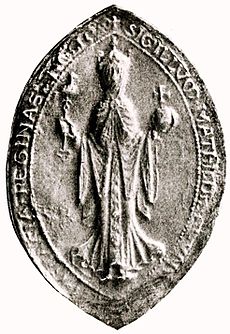 The seal of Matilda of Scotland, one of the candidates for the "fair lady" of the refrain.

Several attempts have been made to identify the 'fair lady', 'lady gay', or lady 'lee/lea' of the rhyme. They include:

References in literature and popular culture

Since the late nineteenth century the rhyme has been seen as one of the most popular and well known in the English speaking world.[1] It has also been referenced in both literature and popular culture. It was used by T. S. Eliot at the climax of his poem The Waste Land (1922).[15]

The final line of the verse was probably the inspiration for the title of Lerner and Loewe's 1956 musical My Fair Lady.[16] The tune is often used by English football supporters as the basis for chants.[17][18]