Mariahilf is located southwest of Vienna's centre (1st district). In the north, Mariahilfer Straße, Vienna's most important shopping street, is its border with Neubau, in the south, the valley of the Vienna River, in the west, the Gürtel beltway.

First settlements around the Roman roads of the area developed around the year 1000. In 1428, the name Im Schöff is mentioned for the first time, but this name was lost when the copy of a sacral painting from Passau was installed in a chapel of the graveyard, which came to be known as Mariahilf ("Mary's help").

More intensive settlement started only after the Second Turkish Siege of Vienna in 1683. The area was of some importance because the road to Schönbrunn Palace led through it.

Gumpendorf was mentioned in 1130 for the first time and developed from a Roman watchtower. It was subject to various feudal lords and was sold to the municipality of Vienna in 1798.

Magdalenengrund was originally known as Im Saugraben an der Wien auf der Gstätten ("In the sow pit on the Wien on the meadow") and consisted only of vineyards. In 1698, some plots were released for construction.

The Laimgrube (clay pit) is probably the oldest part of Mariahilf. It was mentioned in 1291 for the first time, but has existed already since the 11th century. Its name is derived from the clay soil, which was used to produce bricks.

Windmühle (windmill) developed from a feudal holding used by various monastic orders. In 1529 it was destroyed during the First Turkish Siege. Emperor Ferdinand I had the ownerhsip transferred to Johann Francolin, subject to the condition that he should build windmills there. However, he had only one mill built.

On March 6, 1850, the five Vorstädte of Gumpendorf, Mariahilf, Windmühle, Magdalenengrund and Laimgrube became part of Vienna as the Fifth District, Mariahilf. When Wieden was split into two districts in 1861, it became the 6th District. In 1862, some areas north of Mariahilfer Straße were ceded to the 7th District (Neubau).

Towards the end of the 19th century, Mariahilf had developed to become an important business district of Vienna. The Mariahilfer Strasse was a major shopping street; however, the big department stores were beyond the district boundary, over in the 7th District. The Mariahilfer area influenced the roads for mainly small and medium-sized businesses.

Between 1890 and 1907, the Kaunitzgasse steam power plant became one of the first electricity works in Vienna. Following the acquisition of the originally privately operated power plant, by the municipality of Vienna, it was decommissioned and converted into a substation.

Mariahilf is home to many of Vienna's gay and lesbian residents and contains a sizable concentration of bars, clubs, restaurants and shops catering to the community, along with the Rosa Lila Villa community center.

In the 1990s, there were two minor changes in the district boundaries: in 1995 in the area of the belt on the border at the 15th District, and 1996 in the Europe Square in front of the West Railway Station, where the 6th, 7th and 15th District meet. Both border changes affected mainly the transport structures. The district affiliation of residential areas did not change.

The age of people in Mariahilf, in 2001, differed in several ways from the Vienna city-wide averages. So, Mariahilf had fewer children, but more young adults than the average for Vienna. In 2001, the proportion of residents under 15 years was, with 12.4%, below the Vienna value of 14.7%. The population aged 20 to 39 years in Mariahilf was, with 34.4%, more than the Vienna-average of 30.9%. The proportion of the population aged 60 years or more was 19.2%, slightly below the Vienna average (21.7%). The gender distribution in the district area corresponded to the community trend, with 47.1% men and 52.9% women. Mariahilf's 35.8% compared, against Vienna's city average of 41.2%, as much less often married than the average for Vienna.

The religion of the people in Mariahilf, during the 2001 census, ranked about average for Vienna, only the proportion of people with Roman Catholic or Islamic religion was slightly below average. In 2001, 47.4% of the inhabitants had membership in the Roman Catholic Church (Vienna city-wide: 49.2%). There are three district Roman Catholic parishes, with the City Deanery 6 / 7. About 6.4% of residents were Islamic faith, 6.0% belonged to the Orthodox Church, and 5.2% were Protestant. Nearly 26.8% of the district population did not belong to any religious group, and 8.2% had no religion or other religious preference indicated.[4]

The Mariahilf district has always been contested between the political parties ÖVP and SPÖ. While the ÖVP commanded the majority in the years after the Second World War until 1969, it lost the district to the SPÖ in that year. After the SPÖ lost the majority again in 1978, the ÖVP was able to dominate the following elections.

When the Greens entered the district politics in the late 80s, the ÖVP and SPÖ started to rapidly lose votes. The competition with the Liberal Forum (LIF) in 1996 had a similar effect. The ÖVP also lost heavily in the elections of 2001. The SPÖ, after the losses of 1996, was able to compensate for its former losses and reclaimed the majority in the district.

In 2001 the Greens came in a close third to the ÖVP, whereas the Liberal Forum and the FPÖ suffered heavy losses. In the 2005 elections, the trend continued: The FPÖ lost heavily in the vote again and the Liberal Forum lost their seat on the district council, whereas the SPÖ and the Greens gained more votes. In 2005 the Greens came in second for the first time and thus attained the office of deputy district director. In the elections of 2010, the Greens and the ÖVP suffered heavy losses, while the SPÖ, FPÖ and BZÖ gained more votes.

The district coat of arms represents the five formerly independent communities from which the district was formed in 1850. The heart sign is the district-section Mariahilf and shows a brown boat on the sea with billowing silver sails. At the rear, a flag is blowing with the double eagle. On the ship, stands Don Juan de Austria in golden armor, whose victory over the Turks in the naval battle of Lepanto is due to the help of the Virgin Mary.

The left upper part of the coat of arms represents the district-section Laimgrube. It shows Saint Theobald in a brown monk's robe before an altar with a crucifix; to the right stands a church. The coat of arms goes back to a chapel, which was dedicated to St. Theobald in 1621.

The right, lower part of the coat of arms is finally the district-section Gumpendorf. It shows, on a black background, a single, golden head with three lilies in yellow and black color. It is the emblem of the family Muschinger, which in the 16th Century reigned in Gumpendorf. 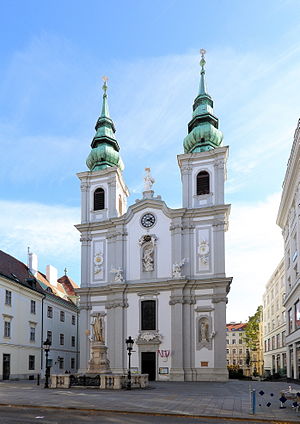 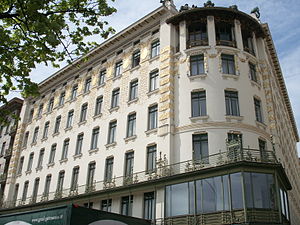 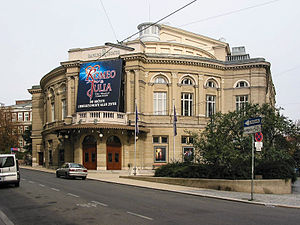 The Theater an der Wien, on Wienzeile, was built in 1801 and is now one of the composite of the United Stages Vienna. Ludwig van Beethoven lived between 1803-1804 part-time in the building, where today a memorial room is dedicated. On Wallgasse street at the other end of the district, is the Raimund Theater, named after Ferdinand Raimund. The house, in the mid-1980s, belonged like the Theater an der Wien to the United Stages Vienna, and it is the venue for musicals. In addition to these two stages, there are smaller theaters, like the TAG, Theater an der Gumpendorferstraße, and the Theater Brett.

The District Museum of Mariahilf, on Mollardgasse street, is dedicated to, inter alia, focusing Ratzenstadl (Magdalenengrund), Theater an der Wien, and the Palais Kaunitz-Esterhazy. In the same house is also the Phonographic Vienna Museum, which deals with the history of the phonograph, also as the Glass Museum Mariahilf. A former Flakturm tower is home to the Haus des Meeres ("house of the sea"), whose biggest attractions of the 2007 opening, included a 300,000 liter shark tank.

On Haydngasse street is located the Haydn-House of the composer Joseph Haydn, acquired in 1793 and inhabited until his death in 1809. Today, the house is a branch of the Vienna Museum. Other museums in Mariahilf are the Kaffeemuseum (coffee museum) with numerous exhibits on the topic of coffee, and the Sanitärhistorische Museum (Sanitary Historical Museum).

[Parts of this article were translated from German Wikipedia.]