From Infogalactic: the planetary knowledge core
Jump to: navigation, search
For other uses, see Clay (disambiguation). 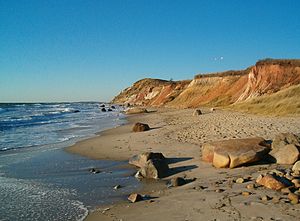 Clay is a fine-grained natural rock or soil material that combines one or more clay minerals with traces of metal oxides and organic matter. Clays are plastic due to their water content and become hard, brittle and non–plastic upon drying or firing.[1] Geologic clay deposits are mostly composed of phyllosilicate minerals containing variable amounts of water trapped in the mineral structure.[2][3] Depending on the content of the soil, clay can appear in various colours, from white to dull gray or brown to a deep orange-red. 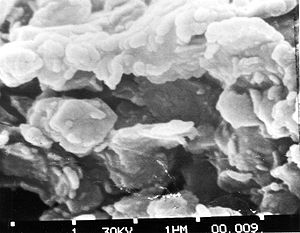 Clays are distinguished from other fine-grained soils by differences in size and mineralogy. Silts, which are fine-grained soils that do not include clay minerals, tend to have larger particle sizes than clays. There is, however, some overlap in particle size and other physical properties, and many naturally occurring deposits include both silts and clay. The distinction between silt and clay varies by discipline. Geologists and soil scientists usually consider the separation to occur at a particle size of 2 µm (clays being finer than silts), sedimentologists often use 4–5 μm, and colloid chemists use 1 μm.[1] Geotechnical engineers distinguish between silts and clays based on the plasticity properties of the soil, as measured by the soils' Atterberg limits. ISO 14688 grades clay particles as being smaller than 2 μm and silt particles as being larger. 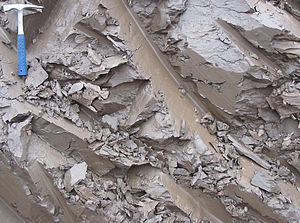 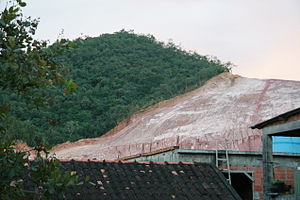 Clay minerals typically form over long periods of time from the gradual chemical weathering of rocks, usually silicate-bearing, by low concentrations of carbonic acid and other diluted solvents. These solvents, usually acidic, migrate through the weathering rock after leaching through upper weathered layers. In addition to the weathering process, some clay minerals are formed through hydrothermal activity. There are two types of clay deposits: primary and secondary. Primary clays form as residual deposits in soil and remain at the site of formation. Secondary clays are clays that have been transported from their original location by water erosion and deposited in a new sedimentary deposit.[4] Clay deposits are typically associated with very low energy depositional environments such as large lakes and marine basins.

Depending on the academic source, there are three or four main groups of clays: kaolinite, montmorillonite-smectite, illite, and chlorite. Chlorites are not always considered a clay, sometimes being classified as a separate group within the phyllosilicates. There are approximately 30 different types of "pure" clays in these categories, but most "natural" clay deposits are mixtures of these different types, along with other weathered minerals.

Varve (or varved clay) is clay with visible annual layers, which form from seasonal deposition of those layers, differences in erosion and organic content. This type of deposit is common in former glacial lakes. When fine sediments are delivered into the calm waters of these glacial lake basins away from the shoreline, they settle to the lake bed. The resulting seasonal layering is preserved in an even distribution of clay sediment banding.[4]

Quick clay is a unique type of marine clay indigenous to the glaciated terrains of Norway, Canada, Northern Ireland, and Sweden. It is a highly sensitive clay, prone to liquefaction, which has been involved in several deadly landslides. 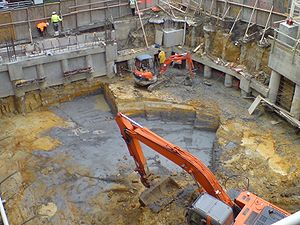 Clay layers in a construction site. Dry clay is normally much more stable than sand with regard to excavations.

Clays exhibit plasticity when mixed with water in certain proportions. When dry, clay becomes firm and when fired in a kiln, permanent physical and chemical changes occur. These changes convert the clay into a ceramic material. Because of these properties, clay is used for making pottery, both utilitarian and decorative, and construction products, such as bricks, wall and floor tiles. Different types of clay, when used with different minerals and firing conditions, are used to produce earthenware, stoneware, and porcelain. Prehistoric humans discovered the useful properties of clay. Some of the earliest pottery shards recovered are from central Honshu, Japan. They are associated with the Jomon culture and deposits they were recovered from have been dated to around 14,000 BC.[5] 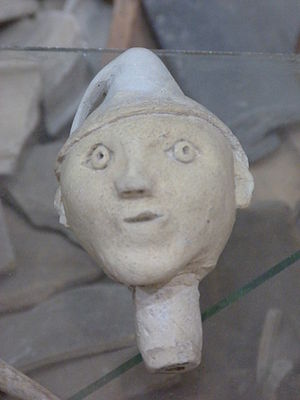 Clays sintered in fire were the first form of ceramic. Bricks, cooking pots, art objects, dishware, and even musical instruments such as the ocarina can all be shaped from clay before being fired. Clay is also used in many industrial processes, such as paper making, cement production, and chemical filtering. Clay is also often used in the manufacture of pipes for smoking tobacco. Until the late 20th century, bentonite clay was widely used as a mold binder in the manufacture of sand castings.

Clay, being relatively impermeable to water, is also used where natural seals are needed, such as in the cores of dams, or as a barrier in landfills against toxic seepage (lining the landfill, preferably in combination with geotextiles).[6] (See Puddling.)

Recent[when?] studies have investigated clay's absorption capacities in various applications, such as the removal of heavy metals from waste water and air purification.[7][8]

A traditional use of clay as medicine goes back to prehistoric times. An example is Armenian bole, which is used to soothe an upset stomach, similar to the way parrots (and later, humans) in South America originally used it.[9] Kaolin clay and attapulgite have been used as anti-diarrheal medicines.

As a building material

Clay is one of the oldest building materials on Earth, among other ancient, naturally-occurring geologic materials such as stone and organic materials like wood.[10] Between one-half and two-thirds of the world's population, in traditional societies as well as developed countries, still live or work in a building made with clay as an essential part of its load-bearing structure. Also a primary ingredient in many natural building techniques, clay is used to create adobe, cob, cordwood, and rammed earth structures and building elements such as wattle and daub, clay plaster, clay render case, clay floors and clay paints and ceramic building material. Clay was used as a mortar in brick chimneys and stone walls where protected from water.