From Infogalactic: the planetary knowledge core
Jump to: navigation, search
This article is about the former husband of the Princess Royal. For other people with the same name, see Mark Phillips (disambiguation).

Captain Mark Anthony Peter Phillips CVO ADC(P) (born 22 September 1948) is an English Olympic gold-medal-winning horseman for Great Britain and ex-husband of Anne, Princess Royal, with whom he had two children. He remains a leading figure in British equestrian circles, a noted eventing course designer, and a columnist in Horse & Hound magazine.

Mark Phillips is the son of Major Peter William Garside Phillips (1920–1998),[1] and Anne Patricia Phillips (née Tiarks;[2] 1926–1988). Anne was educated at Downe House and served in the Women's Royal Naval Service in World War II.[3] Her father was John Gerhard Edward Tiarks (1896-1962), who served in World War I and II, achieving the rank of Brigadier. John Gerhard was Aide-de-Camp to King George VI from 1947-1950. On 1 June 1922 he married Evelyn Florence, the youngest daughter of Percy Roland Cripps, of Winford Manor, Somerset. Actively interested in fox hunting, John was killed in an accident when hunting with the Gloucestershire Berkeley Hunt. His daughter, Anne, had married Major Peter William Garside Phillips in 1946.[4] 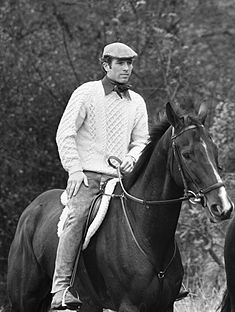 Upon passing out from Sandhurst, Phillips was commissioned as a Second Lieutenant into the Queen's Dragoon Guards in July 1969,[7] After the expected period, he was promoted to Lieutenant in January 1971.[8] By the start of 1974, Phillips was an acting Captain when he was appointed a Personal Aide-de-Camp to Queen Elizabeth II.[9] Phillips was substantively promoted to captain in July 1975.[10] Phillips retired from the Army on 30 March 1978.[11]

He continued to style himself Captain Mark Phillips,[12] as regular cavalry captains whose job principally involved horses are customarily allowed to use this honorific rank in civilian life. (Otherwise it is only majors and above who may use honorifics.)[13]

Phillips was a reserve member of the British equestrian team for the 1968 Olympics. He was part of the British three-day event teams that won a world title in 1970, a European title in 1971 and Olympic gold medals in 1972; individually he finished in 35th place in 1972. At the 1988 Olympics his horse sustained a pulled muscle and could not complete the individual three-day event, but Phillips won a silver medal with the British team. Phillips was a four-time champion at the Badminton Horse Trials, in 1971–72 on Great Ovation, in 74 on Colombus and 1981 on Lincoln. It was through his equestrian activities that he met Princess Anne, the only daughter of Queen Elizabeth II and Prince Philip, Duke of Edinburgh. Their daughter Zara won a silver medal in the three-day event with the British team in 2012.[6]

In 1998, Phillips designed the cross-country venue for the Red Hills Horse Trials, a qualifying event for the Olympics located in Tallahassee, Florida, USA. He is now a regular columnist in Horse & Hound magazine. He also remains a leading figure in British equestrian circles, and serves as Chef d'Equipe of the United States Eventing Team.[14]

Phillips married Princess Anne on 14 November 1973, at Westminster Abbey.[15] They have two children:

The Queen is believed to have offered him a peerage on his wedding day, which he declined. As female-line grandchildren of the Sovereign, Princess Anne's children were never eligible for the style "Royal Highness" or the title "Prince/Princess" under the terms of George V's letters patent of 1917. If Phillips held a peerage, however, his children with Princess Anne would have been entitled to be addressed as "The Honourable", or as "Lord" or "Lady".

The Queen bought the couple Gatcombe Park near Minchinhampton as a wedding present. The Prince of Wales is believed to have originated the nickname "Foggy" on the grounds that he was "thick and wet".[16][17]

In August 1985, Phillips fathered a daughter, Felicity, as a result of an extramarital affair with New Zealand art teacher Heather Tonkin. Phillips was confirmed as the father as a result of DNA testing during a paternity suit in 1991. In 1989 the Princess Royal and Mark Phillips announced their intention to separate, as the marriage had been under strain for a number of years. The couple divorced on 23 April 1992.[18][19]

On 3 May 2012, it was confirmed by Capt Phillips' solicitors that Phillips and Pflueger had separated, intending to divorce. Phillips is reported to be in a relationship with US show jumping rider Lauren Hough who is four months younger than his son. The couple are reported to be planning to live together in Wellington, Florida.[20]

Phillips' personal wealth is thought to be in the range of £15–20 million, although he gained only a small settlement when his marriage to Anne, Princess Royal ended.[17]