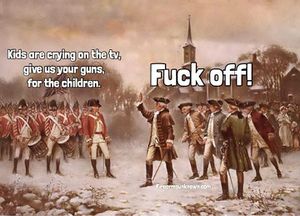 Containing all the hallmarks of a successful meme circulated through social media to advance a point of view, this picture posted in opposition to gun control... a) disparages the other side (the Redcoats on the left) as minions of big government, b) identifies itself with the freedom fighters opposing them, c) places its 2nd Amendment defense within a context of the American Revolution, d) caricatures the enemy's arguments as deceitful, and e) indicates that it is not fooled by way of volumetric profanity suggesting an intent to f) be mad as hell and not take it any more.

Memes are easily created and shared by anyone, end-running mainstream media narratives. Their downside is that a determined adversary operating from a position of might makes right knows that the meme-creator lacks clout and can be largely ignored. The prudent tyrant tolerates memes and other forms of sidelined free speech because allowing so means its creators and sharers exhaust themselves blowing off steam and chasing misdirections rather than slow burning to non-compliance. By indulging escapism rather than going outside, those who assume that sharing memes constitutes real action risk being cooked alive.

A meme is an idea or behavior that spreads from person to person within a society. The term was coined by Richard Dawkins in his book The Selfish Gene in 1976.[1] Dawkins proposed the idea that social information could change and propagate through a culture in a way similar to genetic changes in a population of organisms - i.e., evolution by natural selection. Sticking with its roots in genetics and evolution, the term is derived from the word gene, which is a unit of hereditary biological information made of DNA. Compared to a gene, which has a physical existence within a cell nucleus, a meme is far more abstract and this has led to accusations that "memetics" isn't really science.

The idea was subsequently developed to include political philosophies and religions, which were named memeplexes, because they contain vast numbers of interacting memes. Memes that interact favourably will form strong memeplexes, while memeplexes will resist incompatible memes. A political memeplex valuing authority of thought would be incompatible with memes valuing individuality of thought, for example. This goes some way to explaining the polarisation of thought on the political spectrum.

Like genes, memes may be useful, negative or neutral. For example, political philosophies - or indeed any philosophy including the philosophies of science - are also memes or memeplexes.

Religious mythology is part of the memeplex of religion, as would be the idea that one needs religion. In the same way that Dawkins' "selfish genes" would propagate through populations for their own benefit and not for the benefit of the organisms that carry them, memeplexes propagate through society irrespective of their value to the society. Enduring negative memeplexes are sometimes called "mind viruses"; with atheist proponents of memetics (e.g. Dawkins himself) citing Christian fundamentalism as one such example.

The internet has been a source for the creation and propagation of many new memes — the majority of which are snowclones on image macros. On the internet an idea can be developed and quickly acquire modifications from users around the world, such that the root idea becomes the basis for multiple spin-off ideas, subsets of ideas, and other similar iterations. In this sense, a "meme" evolves, taking on a life of its own through the contributions of users of varied cultural backgrounds. Furthermore as large parts of the Internet are durable there is a permanent record of how the memes changed and developed.

Most memes are humorous in nature. "All Your Base Are Belong to Us" was an early internet meme, and "lolcats" is a popular emergent meme. Other memes focus on potential dangers, such as cell phones causing fires at gas pumps. Memes quickly lose their humor value weeks after being created, even days. (see: Reddit, 4chan)

A "scientific" study of memetics was attempted with the establishment of the Journal of Memetics, which lasted from 1997-2005.[2] While memetics has gained a few boosters in fields that study culture such as social psychology, sociology, and anthropology, it has largely been ignored as a methodological approach or met with harsh criticism. In the final issue of the Journal of Memetics, Bruce Edmonds argued that memetics had "failed to produce substantive results," writing "I claim that the underlying reason memetics has failed is that it has not provided any extra explanatory or predictive power beyond that available without the gene-meme analogy."[3]

A common criticism of memetics is that the meme is a more primitive version of the concept of "sign" in semiotics repackaged in biological and evolutionary language.[4][5] Luis Benitez-Bribiesca has criticized memetics for lacking a well-formed definition of "meme" and argued that the high rate of "mutation" as proposed by the memeticists would lead to a "chaotic disintegration" of culture rather than a progressive evolution. (Not to mention denouncing it as a "pseudoscientific dogma.")[6] Benitez-Bribiesca's criticisms concerning fidelity and the ill-defined nature of memes feature in many other critiques of memetics as well. Dawkins argues that the fidelity is high enough for memetic copying to work in accordance with evolutionary processes.[7] Dan Sperber and Scott Atran reply that high fidelity copying is the exception and not the rule in cultural transmission.[8][9] Another problem concerning fidelity is the reconstructive nature of memory. Because memory does not store an exact copy of information, we can expect fidelity to decrease both in the process of "copying" or imitating memes from person-to-person and in the process of each individual recalling memes from memory. Atran also notes that memetics attempts to (and fails to) circumvent the evolved cognitive architecture of the mind. Robert Boyd and Peter J. Richerson claim that population thinking is more important than a model of genetic inheritance as an evolutionary analogy to cultural evolution.[10]

The issue of the definition of meme features in most of the above criticisms as well. What is, or is not, a meme? Does the meme "carve nature at its joints"? We know, for example, that computer viruses can follow genetic and evolutionary algorithms.[11] But how far can this application be extended into the cultural realm? Mesoudi, Whiten, and Laland argue that advances in modern genetics have chipped away at the definition of the "gene" as a discrete unit and so the same criticism might be applied to genetics, but it is still a useful field. However, they also note some of the successes of non-memetic cultural evolutionary models such as Boyd and Richerson's population thinking approach in classifying archaeological artifacts.[12] Jeremy Burman claims that the meme was just a metaphor that got taken seriously and reified by a few too many people.[13] Many of the criticisms listed above, however, assert that whether the "meme" itself can be found or said to "exist" is irrelevant to its usefulness as it fails to provide a useful framework or systematic set of falsifiable predictions due to the circularity in the definition of fitness. (How do we know which memes are the most fit? The ones that spread the most are the fittest. And which memes spread the most? The ones that are the fittest, of course!)

Memetics does not offer a complete analogy to genetics. Genetics involves a clear separation between genes, genotypes, and phenotypes. A gene is a proxy code for the phenotype, and the phenotype - not the gene - experiences biological selection pressure. This is what allows biological natural selection to take place based on random mutation and inheritance of genetic code. A "meme", however, combines in one jumble the three concepts - it acts as a gene but is also its own phenotype. Without this distinction, the evolution of memes is more Lamarckian than Darwinian - resembling the evolutionary processes operating on acquired characteristics in languages rather than the evolutionary mechanisms in biology. This should come as little surprise to those who consider that Dawkins proposed the concept of memes as a rough metaphor of genetic information-transmission, rather than as an exact scientific parallel. Dawkins emphasized the features in genetics that involve passing on information, and thus made a fairly legitimate comparison to how humans share and adapt ideas.[14] However, the similarities don't go all the way. Memetics exemplifies in some ways a different type of evolutionary change.

In fact, as an object of study, folklore comes closest to the subject proposed by the notion of memes. (For the idea of the "meme" as it has developed popularly, "folklore" is just the original name.) Folklorists have always paid attention to the ways that folk culture, arts, and traditions are handed down from one person to another and from one generation to the next. They hit upon the concept of the folk process: the way in which folklore is preserved, edited, and amended in the process of its transmission, a process that keeps the folk culture relevant and useful as it is transmitted.

The folklorists blinkered themselves early on by their insistence on exclusively oral transmission and arbitrary esthetic preferences for the "authentic". It wasn't until the 1970s and afterwards that folklorists realized that folklore was also being created by popular interactions with and responses to mass culture. The folklorists also learned to unsee the sharp distinction between the oral, handmade, and "authentic" versus published and mass-produced cultural artifacts. Technology was turning this into a continuum. Folklore could be spread by self-published broadsheets, by photocopier and fax machine, by email, and on the Internet. (Just like some folks took a while to figure out that folk music could be played on electric guitars.)

When the subject matter of folklore is expanded this way, it would appear in some ways to swallow the idea of the meme. At minimum, folklore offers an alternative vocabulary to discuss the preservation, alteration, and expansion of cultural ideas in the process of their transmission, one that does not need biological metaphors.