From Infogalactic: the planetary knowledge core
Jump to: navigation, search
For the group of astronauts, see Mercury Seven.

Mercury-Atlas 7, launched May 24, 1962, was the fourth flight of Project Mercury, the first manned space program of the United States. The Mercury spacecraft, named Aurora 7, made three Earth orbits, piloted by astronaut Scott Carpenter. He was the sixth human and the fourth American in space.

A targeting error during reentry took the spacecraft 250 miles (about 400 km) off-course, delaying recovery of Carpenter and the spacecraft. The mission used Mercury spacecraft No. 18 and Atlas launch vehicle No. 107-D.

The original prime crew for Mercury Atlas-7 was to have been Deke Slayton, with Schirra as his back-up. However Slayton was removed from all flight crew availability after the discovery of cardiac arrhythmia during a training run in the g-loading centrifuge. If Slayton had flown MA-7, his spacecraft would have been named Delta 7, as this would have been the fourth manned flight and Delta (Δ) is the fourth letter in the Greek alphabet.[2] 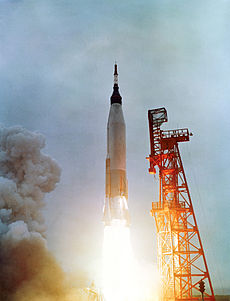 The focus of Carpenter's five-hour mission was on science. The full flight plan included the first study of liquids in weightlessness, Earth photography, and an unsuccessful attempt to observe a flare fired from the ground. At dawn of the third and final orbit, Carpenter inadvertently bumped his hand against the inside wall of the cabin and solved a mystery from the previous flight. The resulting bright shower of particles outside the spacecraft - what John Glenn had called "fireflies" - turned out to be ice particles shaken loose from the spacecraft's exterior.

Like Glenn, Carpenter circled the Earth three times. Total time weightless 4 h 39 min 32 s. The performance of the Mercury spacecraft and Atlas launch vehicle was excellent in nearly every respect. All primary mission objectives were achieved. The single mission-critical malfunction which occurred involved a failure in the spacecraft pitch horizon scanner, a component of the automatic control system. This anomaly was adequately compensated for by the pilot in subsequent in-flight operations so that the success of the mission was not compromised. A modification of the spacecraft control-system thrust units was effective. Cabin and pressure-suit temperatures were high but not intolerable. Some uncertainties in the data telemetered from the bioinstrumentation prevailed at times during the flight; however, associated information was available which indicated continued well-being of the astronaut.

Equipment was included in the spacecraft which provided valuable scientific information; notably that regarding liquid behavior in a weightless state, identification of the airglow layer observed by Astronaut Glenn, and photography of terrestrial features and meteorological phenomena. An experiment which was to provide atmospheric drag and color visibility data in space through deployment of an inflatable sphere was partially successful. The flight further qualified the Mercury spacecraft systems for manned orbital operations and provided evidence for progressing into missions of extended duration and consequently more demanding systems requirements.

Partly because he had been distracted watching the fireflies and partly because of his busy schedule, and a malfunction of the automatic alignment system, Carpenter overshot his planned reentry mark and splashed down 250 miles (402 kilometers) from target.

Aurora 7 is displayed at the Museum of Science and Industry in Chicago, Illinois.[3]