Mutilation or maiming is an act of physical injury that degrades the appearance or function of any living body.

Some ethnic groups practice ritual mutilation, e.g. scarification, burning, flagellation, tattooing, or wheeling, as part of a rite of passage. In some cases, the term may apply to treatment of dead bodies, such as soldiers mutilated after they have been killed by an enemy.

The traditional Chinese practices of língchí and foot binding are forms of mutilation. One form of mutilation that has captured the imagination of Westerners, as well as the now tourist centered "long-neck" people, a sub-group of the Karen known as the Padaung where women wear brass rings around their neck.[1] The act of tattooing is also considered a form of self-mutilation according to some cultural traditions, such as within Christianity. A joint statement released by the United Nations and numerous other international bodies opposes female genital cutting (female circumcision) as a form of mutilation.[2] Whether or not male circumcision amounts to mutilation is a subject of active academic debate.[3][4]

Castration is also a form of mutilation.

Maiming, or mutilation which involves the loss of, or incapacity to use, a bodily member, is and has been practised by many societies with various cultural and religious significances, and is also a customary form of physical punishment, especially applied on the principle of an eye for an eye.

The Araucanian warrior Galvarino suffered this punishment as a prisoner during the Spanish conquest of Chile.

In law, maiming is a criminal offence; the old law term for a special case of maiming of persons was mayhem, an Anglo-French variant form of the word.

Maiming of animals by others than their owners is a particular form of the offence generally grouped as malicious damage. For the purpose of the law as to this offence animals are divided into cattle, which includes horses, pigs and asses, and other animals which are either subjects of larceny at common law or are usually kept in confinement or for domestic purposes.

In Britain under the Malicious Damage Act 1861 the punishment for maiming of cattle was three to fourteen years penal servitude; malicious injury to other animals is a misdemeanour punishable on summary conviction. For a second offence the penalty is imprisonment with hard labor for over twelve months. Maiming of animals by their owner falls under the Cruelty to Animals Acts.

In times when even judicial physical punishment was still commonly allowed to cause not only intense pain and public humiliation during the administration but also to inflict permanent physical damage, or even deliberately intended to mark the criminal for life by docking or branding, one of the common anatomical target areas not normally under permanent cover of clothing (so particularly merciless in the long term) were the ears. 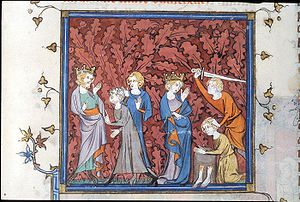 Fredegund ordering the mutilation of Olericus

In England, for example, various pamphleteers attacking the religious views of the Anglican episcopacy under William Laud, the Archbishop of Canterbury, had their ears cut off for those writings: in 1630 Dr. Alexander Leighton and in 1637 still other Puritans, John Bastwick, Henry Burton and William Prynne.

In Scotland one of the Covenanters, James Gavin of Douglas, Lanarkshire, had his ears cut off for refusing to renounce his religious faith. In Japan, Gonsalo Garcia and his companions were similarly treated.

Notably in various jurisdictions of colonial British North America, even relatively minor crimes, such as hog stealing, were punishable by having one's ears nailed to the pillory and slit loose, or even cropped, a counterfeiter would be branded on top (for that crime, considered lèse-majesté, the older mirror punishment was boiling in oil).

Independence did not render American justice any less bloody. For example, in the future state of Tennessee, an example of harsh 'frontier law' under the 1780 Cumberland Compact took place in 1793 when Judge John McNairy sentenced Nashville's first horse thief, John McKain, Jr., to be fastened to a wooden stock one hour for 39 lashes, and have his ears cut off and cheeks branded with the letters "H" and "T".

Tongue cutting is also a form of mutilation as this leads to bleeding to death in most cases with choking in the lungs. [5]

In Sharia law, mutilation is, in certain cases, used as a punishment for crimes. For example, thieves may be punished by having the right hand amputated. 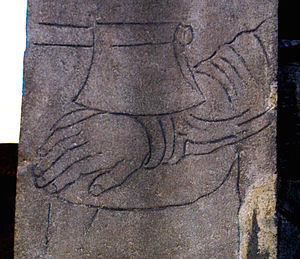 Another example from a non-western culture is that of Nebahne Yohannes, an unsuccessful claimant to the Ethiopian imperial throne who had his ears and nose cut off, yet was then freed. This form of mutilation against unsuccessful claimants to thrones has been in use in middle-eastern regions for thousands of years. To qualify as a king, formerly, one had to exemplify perfection. Obvious physical deformities such as missing noses, ears, or lips, are thereby sufficient disqualifications. The victim in these cases is typically freed alive to act (a) as an example to others, and (b) as no longer a threat.