From Infogalactic: the planetary knowledge core
Jump to: navigation, search
In this Japanese name, the family name is Mutsu. 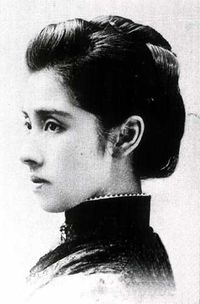 Mutsu Munemitsu was born in Wakayama domain, Kii Province as the sixth son of Date Munehiro, a samurai retainer of the Kii Tokugawa clan. His father was active in the Sonnō jōi movement, and Mutsu Munemitsu joined forces with Sakamoto Ryōma and Itō Hirobumi in the movement to overthrow the Tokugawa shogunate.

After the Meiji restoration, Mutsu held a number of posts in the new Meiji government, including that of governor of Hyōgo Prefecture and later governor of Kanagawa Prefecture, both of which were host to foreign settlements. He was head of the Land Tax Reform of 1873-1881, and served on the Genrōin. He conspired to assist Saigō Takamori in the Satsuma Rebellion and was imprisoned from 1878 until 1883. While in prison he translated Jeremy Bentham's Utilitarianism into Japanese.

After he left prison, he rejoined the government as an official of the Foreign Ministry, and in 1884 was sent to Europe for studies. Later he became Japanese Minister to Washington D.C. (1888–1890), during which time he established formal diplomatic relations between Japan and Mexico, and partially revised the unequal treaties between Japan and the United States.

On his return to Japan in 1890, he became Minister of Agriculture and Commerce. He was also elected to the House of Representatives of Japan from the 1st Wakayama District for a single term in the 1890 General Election. In 1892, he became Foreign Minister in the Itō Hirobumi cabinet. In 1894, he concluded the Anglo-Japanese Treaty of Commerce and Navigation of 1894, which finally ended the unequal treaty status between Japan and Great Britain.

Mutsu was the lead Japanese negotiator in the Treaty of Shimonoseki, which ended the First Sino-Japanese War (1894-1895). In the wake of an attempt on the life of the Chinese leading negotiator Li Hung-chang by a Japanese fanatic, the Japanese government voluntarily reduced the size of the indemnity it planned to claim from China, and Mutsu famously remarked, 'Li's misfortune is the good fortune of the Great Ch'ing Empire'.[1] The Triple Intervention by France, Germany and Russia reversed the gains that Mutsu had negotiated from China in the Treaty of Shimonoseki, and the Japanese public blamed Mutsu for the national humiliation. He resigned all government posts in May 1896 and moved to Ōiso, Kanagawa, where he wrote his personal diplomatic memoirs Kenkenroku (蹇蹇録) after the treaty was signed to explain his views and actions. However, his memoirs could not be published until 1923 due to the diplomatic secrets they contained. 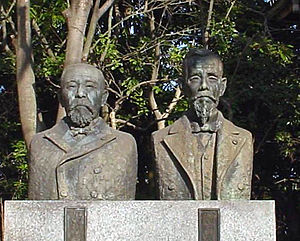 Statues of Mutsu and Itō Hirobumi at Shimonoseki

Mutsu lived in what is now Kyu-Furukawa Gardens. Mutsu died of tuberculosis in Takinogawa, Tokyo Prefecture in 1897.

Mutsu was ennobled with the title of hakushaku (count) under the kazoku peerage system at the end of the Sino-Japanese War.