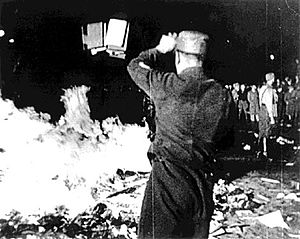 Book burning in Berlin, May 1933.
File:Yad Vashem Books burned by Nazis by David Shankbone.jpg
Examples of books burned by the Nazis on display at Yad Vashem.

The Nazi book burnings were a campaign conducted by the German Student Union to ceremonially burn books in Nazi Germany and Austria in the 1930s. The books targeted for burning were those viewed as being subversive or as representing ideologies opposed to Nazism. These included books written by Jewish pacifist, classical liberal, anarchist, socialist, and communist authors, among others. 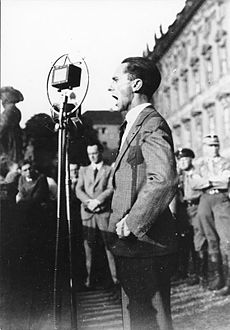 Goebbels speaking at a political rally against the Lausanne Conference (1932)

On April 8, 1933, the Main Office for Press and Propaganda of the German Student Union proclaimed a nationwide "Action against the Un-German Spirit", which was to climax in a literary purge or "cleansing" ("Säuberung") by fire. Local chapters were to supply the press with releases and commissioned articles, sponsor well-known Nazi figures to speak at public gatherings, and negotiate for radio broadcast time. On the 8th of April, the Student Union also drafted the Twelve Theses which deliberately evoked Martin Luther and the historic burning of "Un-German" books at the Wartburg festival on the 300th anniversary of the posting of Luther's Ninety-Five Theses. The theses called for a "pure" national language and culture. Placards publicized the theses, which attacked "Jewish intellectualism", asserted the need to "purify" German language and literature, and demanded that universities be centres of German nationalism. The students described the "action" as a response to a worldwide Jewish "smear campaign" against Germany and an affirmation of traditional German values.

On 10 May 1933, in an act of ominous significance, the students burned upwards of 25,000 volumes of "un-German" books, thereby presaging an era of uncompromising state censorship. In many university towns, nationalist students marched in torch lit parades against the "un-German" spirit. The scripted rituals of this night called for high Nazi officials, professors, rectors, and student leaders to address the participants and spectators. At the meeting places, students threw the pillaged, banned books into the bonfires with a great joyous ceremony that included live music, singing, "fire oaths," and incantations. In Berlin, some 40,000 people gathered in the square at the State Opera to hear Joseph Goebbels deliver a fiery address: "No to decadence and moral corruption!" Goebbels enjoined the crowd. “Yes to decency and morality in family and state! I consign to the flames the writings of Heinrich Mann, Ernst Gläser, Erich Kästner.”

The era of extreme Jewish intellectualism is now at an end. The breakthrough of the German revolution has again cleared the way on the German path...The future German man will not just be a man of books, but a man of character. It is to this end that we want to educate you. As a young person, to already have the courage to face the pitiless glare, to overcome the fear of death, and to regain respect for death - this is the task of this young generation. And thus you do well in this midnight hour to commit to the flames the evil spirit of the past. This is a strong, great and symbolic deed - a deed which should document the following for the world to know - Here the intellectual foundation of the November Republic is sinking to the ground, but from this wreckage the phoenix of a new spirit will triumphantly rise.

— Joseph Goebbels, Speech to the students in Berlin 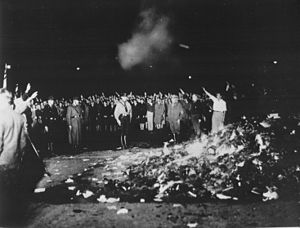 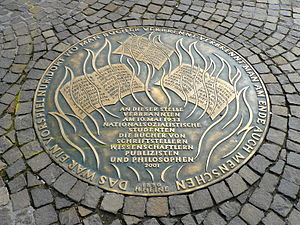 Memorial for book burning in 1933; in the ground of Römerberg Square in front of Frankfurt city hall, Hesse, Germany. 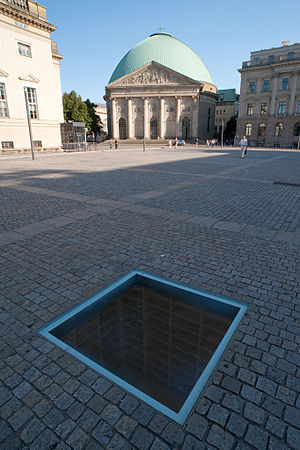 Book burning memorial at the Bebelplatz in Berlin by Micha Ullman

Not all book burnings took place on 10 May as the German Student Union had planned. Some were postponed a few days because of rain. Others, based on local chapter preference, took place on 21 June, the summer solstice, a traditional date of celebration. Nonetheless, in 34 university towns across Germany the "Action against the Un-German Spirit" was a success, enlisting widespread newspaper coverage.[citation needed] And in some places, notably Berlin, radio broadcasts brought the speeches, songs, and ceremonial incantations "live" to countless German listeners.

All of the following types of literature were to be banned.

The blind writer Helen Keller published an Open Letter to German Students: 'You may burn my books and the books of the best minds in Europe, but the ideas those books contain have passed through millions of channels and will go on.'”[1]

The burning of the books represents a culmination of the persecution of those authors whose verbal or written opinions were opposed to Nazi ideology. Many artists, writers and scientists were banned from working and publication. Their works could no longer be found in libraries or in the curricula of schools or universities. Some of them were driven to exile (like Walter Mehring and Arnold Zweig); others were deprived of their citizenship (for example Ernst Toller and Kurt Tucholsky) or forced into a self-imposed exile from society (e.g. Erich Kästner). For other writers the Nazi persecutions ended in death. Some of them died in concentration camps, due to the consequences of the conditions of imprisonment, or were executed (like Carl von Ossietzky, Erich Mühsam, Gertrud Kolmar, Jakob van Hoddis, Paul Kornfeld, Arno Nadel and Georg Hermann, Theodor Wolff, Adam Kuckhoff, and Rudolf Hilferding). Exiled authors despaired and committed suicide, for example: Walter Hasenclever, Ernst Weiss, Carl Einstein, Walter Benjamin, Ernst Toller, and Stefan Zweig.

Heinrich Heine, whose work was also burned, wrote in his 1820-1821 play Almansor the famous admonition, “Dort, wo man Bücher verbrennt, verbrennt man am Ende auch Menschen": "Where they burn books, they will in the end also burn people."

Main articles: Censorship in the Federal Republic of Germany, Allied Occupation Zones in Germany and Denazification

In 1946, the Allied occupation authorities drew up a list of over 30,000 titles, ranging from school books to poetry and including works by such authors as von Clausewitz. Millions of copies of these books were confiscated and destroyed. The representative of the Military Directorate admitted that the order in principle was no different from the Nazi book burnings.[2]

Artworks were under the same censorship as other media;

"all collections of works of art related or dedicated to the perpetuation of German militarism or Nazism will be closed permanently and taken into custody.".

The directives were very broadly interpreted, leading to the destruction of thousands of paintings and thousands more were shipped to deposits in the U.S. Those confiscated paintings still surviving in U.S. custody include, for example, a painting "depicting a couple of middle aged women talking in a sunlit street in a small town".[3]

Fighting the Fires of Hate: America and the Nazi Book Burnings is a traveling exhibition produced by the United States Holocaust Memorial Museum. Through historical photographs, documents, and films, it explores how the book burnings became a potent symbol in America’s battle against Nazism and why they continue to resonate with the public—in film, literature, and political discourse-—to this day.[4] In 2014, this exhibition will be displayed in West Fargo, North Dakota; Dallas, Texas; and Missoula, Montana.[5]

This article incorporates text from the United States Holocaust Memorial Museum, and has been released under the GFDL.