From Infogalactic: the planetary knowledge core
Jump to: navigation, search
This article is about the historic term. For the people denoted by the term, see Black people. For other uses, see Negro (disambiguation).

The word Negro (plural, Negroes) is used in the English-speaking world to refer to a person of black ancestry or appearance. Negro denotes "black" in Spanish and Portuguese, derived from the ancient Latin word niger, meaning black, which itself is probably from a Proto-Indo-European root *nekw-, "to be dark", akin to *nokw-, night.[1][2] 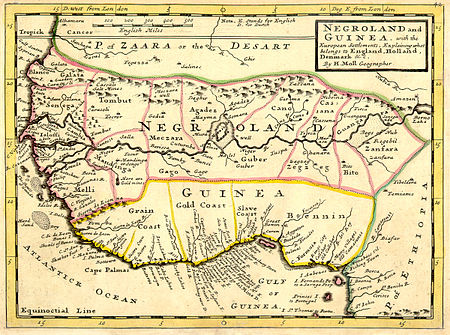 A European map of West Africa, 1736. Included is the archaic mapping designation of Negroland.

"Negro" was once an acceptable term. All-Negro Comics was a 1947 comic anthology written by African-American writers and featuring black characters.

Around 1442, the Portuguese first arrived in Southern Africa while trying to find a sea route to India. The term negro, literally meaning 'black', was used by the Spanish and Portuguese as a simple description to refer to the Bantu peoples that they encountered. From the 18th century to the late 1960s, negro (later capitalized) was considered to be the proper English-language term for people of black African origin.

Negro superseded colored as the most polite word for African Americans at a time when black was considered more offensive.[3] This word was accepted as normal, including by people classified as Negroes, until the late 1960s, after the later African-American Civil Rights Movement. One well-known example is the identification by Martin Luther King, Jr. of his own race as "Negro" in his famous "I Have a Dream" speech of 1963.

During the civil rights movements era of the 1950s and 1960s, some black American leaders in the United States, notably Malcolm X, objected to the word Negro because they associated it with the long history of slavery, segregation, and racial discrimination that treated black Americans as second class citizens, or worse.[4] Malcolm X preferred Black to Negro, but also started using the term Afro-American after leaving the Nation of Islam.[5]

The term Negro is still used in some historical contexts, such as in the name of the United Negro College Fund[7][8] and the Negro league in sports.

The word Negro fell out of favor by the early 1970s in the United States after the Civil Rights Movement. However, many older African Americans initially found the term black more offensive than Negro. In current English language usage, Negro is generally considered to be acceptable in a historical context, such as Negro spirituals or baseball's Negro Leagues of the early and mid-20th century, or in the name of older organizations, as in the United Negro College Fund or the Journal of Negro Education. The U.S. Census now uses the grouping "Black, African-American, or Negro." Negro is used in efforts to include older African Americans who more closely associate with the term.[12] According to Oxford Dictionaries, use of the word "now seems out of date or even offensive in both British and US English".[13]

A specifically female form of the word, negress (sometimes capitalized), was occasionally used. However, like Jewess, it has all but completely fallen from use. (An exception is its unusual use in the titles of paintings, drawings and sculptures, largely as an allusion to the formerly common occurrence of the word in such titles, but such usage has dropped off dramatically.) Both terms are often considered to be racist and sexist although, as with other racial, ethnic, and sexual words that are seen as pejorative, some people have tried to reclaim the words, for example, the artist Kara Walker.

The related word Negroid was used by 19th- and 20th-century racial anthropologists. The suffix -oid means "similar to". "Negroid" as a noun was used to designate a wider or more generalized category than Negro; as an adjective it qualified a noun as in, for example, "negroid features".[14] 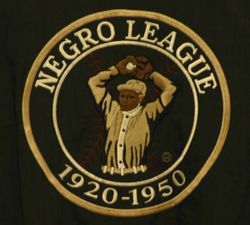 An emblem of the US Negro league baseball.

In Portuguese, negro is an adjective for the color black, although preto is the most common antonym of branco ('white'). In Brazil and Portugal, negro is equivalent to preto, but it is far less commonly used.

While negro (feminine negra) is most commonly used to describe the color in general in Spanish, it can also be used to describe people with dark-colored skin. In Spain, Mexico and almost all of Latin-America, negro (lower-cased, as ethnonyms are generally not capitalized in Romance languages) means 'black person'. As in English, this Spanish word for 'black' is often used figuratively and negatively, to mean 'irregular' or 'undesirable', as in mercado negro ('black market'). However, in Spanish-speaking countries where there are fewer people of West African slave origin, such as Argentina and Uruguay, negro (negra for females) is commonly used to refer to partners, close friends[17] or people in general, independent of skin color. In Venezuela the word negro is similarly used, despite its large West African slave-descended population percentage.

In certain parts of Latin America, the usage of "negro" to directly address black people can be colloquial. It is important to understand that this is not similar to the use of the word nigga in English in urban hip hop subculture in the United States, given that "negro" is not a racist term. For example, one might say to a friend, "Negro ¿Como andas? (literally 'Hey, black-one, how are you doing?'). In such a case, the diminutive negrito can also be used, as a term of endearment meaning 'pal'/'buddy'/'friend'. Negrito has thus also come to be used to refer to a person of any ethnicity or color, and also can have a sentimental or romantic connotation similar to 'sweetheart' or 'dear' in English. (However, in the Philippines negrito was used for a local dark-skinned, short population native to the Negros islands among other places; this is the meaning of Negrito in English.) In other Spanish-speaking South American countries, the word negro can also be employed in a roughly equivalent term-of-endearment form, though it is not usually considered to be as widespread as in Argentina or Uruguay (except perhaps in a limited regional and/or social context). It is consequently occasionally encountered, due to the influence of nigga, in Chicano English in the United States.

In Portuguese-speaking Brazil, usage of "negro" heavily depends on the region. In state of Rio de Janeiro, for example, where the main racial slur against black people is crioulo (literally 'creole', i.e. Americas-born person of West African slave descent), preto/preta and pretinho/pretinha can in very informal situations be used the same endearment senses as negro/negra and negrito/negrita in Spanish-speaking South America, but it usage changes in the nearby state of São Paulo, where crioulo is considered an archaism and preto is the most-used equivalent of "negro"; thus all kind of use of preto/a carries the risk of being deemed offensive.

In Bolvia and especially Chile, where people of West African slave descent are fewer, Spanish negro and negra are used in colloquial, semi-formal and sometimes even in formal contexts to refer to dark skinned people of any ethnicity and, by itself, does not represent an insult.

In Italian, negro / negra were used as neutral term equivalents of "negro", which was used until the end of the 1960s. Today, the word is considered offensive; if used with a clear offensive intention, it may be punished by law.

In the French language, the positive concept of negritude ('blackness') was developed by the francophone Senegalese politician Léopold Sédar Senghor. The word nègre as a racial term fell out of favor around the same time as its English equivalent negro. Its usage in French today has shifted completely, to refer to a ghostwriter (i.e. one who writes a book on behalf of its nominal author, usually a non-literary celebrity).

In Haitian Creole, the word nèg, derived from the French nègre, refers to a dark-skinned man; it can also be used for any man, regardless of skin color, roughly like guy or dude in American English.

In Swedish and Norwegian, neger used to be considered a neutral equivalent to "negro". However, the term gradually fell out of favour through the 1960s, 1970s and 1980s.

In Denmark, usage of neger is up for debate. Linguists and others may argue that the word has a historical racist legacy that makes it unsuitable for use today. Mainly older people use the word neger with the notion that it is a neutral word paralleling "negro". Relatively few young people use it, other than for provocative purposes in recognition that the word's acceptability has declined.[18]

In the Finnish language the word neekeri (cognate with negro) was long considered a neutral equivalent for "negro".[19] In 2002, neekeri's usage notes in the Kielitoimiston sanakirja shifted from "perceived as derogatory by some" to "generally derogatory".[19] The name of a popular Finnish brand of chocolate-coated marshmallow treats was changed by the manufacturers from Neekerinsuukko (lit. 'negro's kiss', like the German version) to Brunbergin suukko ('Brunberg's kiss') in 2001.[19] A study conducted among native Finns found that 90% of research subjects considered the terms neekeri and ryssä among the most derogatory epithets for ethnic minorities.[20]

The Dutch word, neger is generally (but not universally) considered to be a neutral one, or at least less negative than zwarte ('black').[21]

In German, Neger was considered to be a neutral term for black people, but gradually fell out of fashion since the 1970s. Neger is today often considered to be derogatory or racist. The terms Schwarzer (black person), Farbiger (colored person) or Afrikaner/Afro-Amerikaner (African/Afro-American) are commonly used, and the now-obsolete Mohr (from Latin morus, black) survives in advertising. There is also a kind of sweet traditionally referred to as "Negerkuss" (literally "negro kiss").

In Turkish, zenci (from the Arabic zanj for Bantu peoples) is the closest equivalent to "negro".

In Hungarian, néger (possibly derived from its German equivalent) is still considered to be the most neutral equivalent of "negro".[22] It is usually used without any negative connotation, while other words such as fekete (black person) or színesbőrű (colored person) are somewhat offensive. However, the term nigger is widely considered to be extremely pejorative.

In Russia, the term негр (negr) was commonly used in the Soviet period without any negative connotation, and its use continues in this neutral sense. In modern Russian media, the negr is used somewhat less frequently. Čërnyj as an adjective is also used in a neutral sense, and conveys the same meaning as negr, an in чёрные американцы (čërnye amerikancy or chyornuye amerikantsy: 'black Americans'). Other alternatives to negr are темнокожий (temnokozhiy—dark-skinned), чернокожий (chernokozhiy: black-skinned). These two are used as both nouns and adjectives.