The Nero Decree (German: Nerobefehl) was issued by Adolf Hitler on March 19, 1945 ordering the destruction of German infrastructure to prevent their use by Allied forces as they penetrated deep within Germany. It was officially titled Demolitions on Reich Territory Decree (Befehl betreffend Zerstörungsmaßnahmen im Reichsgebiet) and has subsequently become known as the Nero Decree, after the Roman Emperor Nero, who supposedly engineered the Great Fire of Rome in 64 AD. The decree was deliberately disobeyed by Albert Speer.

By 1945, the German situation was desperate.[1] Most of the conquered territories had been liberated or recaptured, the Ardennes Offensive had failed, and Allied armies were advancing on Germany proper from both the East and the West. However, Hitler was not willing to lay down arms and accept the need for unconditional surrender.[1] 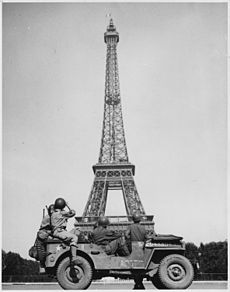 This was not the first time Hitler had tried to destroy infrastructure before it could be taken. Shortly before the Liberation of Paris, Hitler ordered explosives to be placed around important landmarks, such as the Eiffel Tower, and key transportation hubs. If the Allies came near the city, the military governor, Dietrich von Choltitz was to detonate these bombs, leaving Paris "lying in complete debris."[2] Von Choltitz, however, did not carry out the order and surrendered to the Allies. 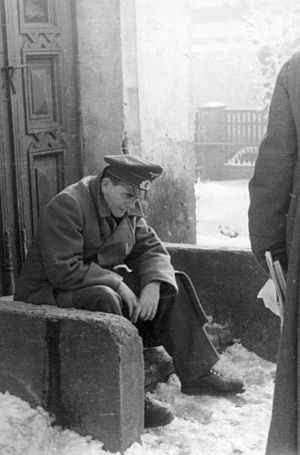 Reichsminister Speer rests on a doorstep

Its most pertinent section reads as follows:

"It is a mistake to think that transport and communication facilities, industrial establishments and supply depots, which have not been destroyed, or have only been temporarily put out of action, can be used again for our own ends when the lost territory has been recovered. The enemy will leave us nothing but scorched earth when he withdraws, without paying the slightest regard to the population. I therefore order:

"1) All military transport and communication facilities, industrial establishments and supply depots, as well as anything else of value within Reich territory, which could in any way be used by the enemy immediately or within the foreseeable future for the prosecution of the war, will be destroyed."[3] 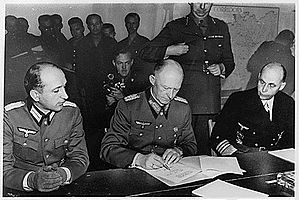 Alfred Jodl (between Major Wilhelm Oxenius to the left and Generaladmiral Hans-Georg von Friedeburg to the right) signing the German Instrument of Surrender at Reims, France 7 May 1945

The decree was in vain. The responsibility for carrying it out fell on Albert Speer, Hitler's Minister of Armaments and War Production. Speer was appalled by the order and lost faith in the dictator. Just as von Choltitz had several months earlier, Speer deliberately failed to carry out the order. Upon receiving it, he requested to be given exclusive power to implement the plan, instead using his power to convince the generals and Gauleiters to ignore the order. Hitler remained unaware of this until the very end of the war, when Speer, while visiting Hitler in his Berlin bunker, admitted to him that he deliberately disobeyed. Hitler was angry with his minister, but allowed Speer to leave nonetheless. Hitler committed suicide on April 30, 1945, 42 days after issuing the order. Shortly afterwards, on May 7, 1945, General Alfred Jodl signed the German military surrender, and on May 23 Speer was arrested on the orders of U.S. General Dwight D. Eisenhower, together with the rest of the provisional German government led by Admiral Karl Dönitz, Hitler's successor as head of state.