The New-York Tribune was an American newspaper, first established by Horace Greeley in 1841. Between 1842 and 1866, the newspaper bore the name New-York Daily Tribune.[1] From the 1840s through the 1860s it was the dominant Whig Party and then Republican newspaper in the U.S. The paper achieved a circulation of approximately 200,000 during the decade of the 1850s, making it the largest in New York City and perhaps the nation. The Tribune's editorials were widely read and helped shape national opinion.

Tribune was created by Horace Greeley in 1841 with the goal of providing a straightforward, trustworthy media source in an era when newspapers such as the New York Sun and New York Herald thrived on sensationalism. Greeley had previously published a weekly newspaper, The New Yorker (unrelated to the modern magazine), in 1833, and was also publisher of the Whig Party's political organ, Log Cabin. In 1841, he merged operations of these two publications into a new newspaper, the New-York Tribune. 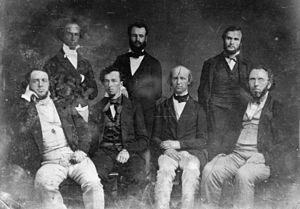 Daguerrotype of the Tribune editorial staff by Mathew Brady, circa 1850s. Horace Greeley is seated, second from the right. Legendary editor Charles Dana is standing, center.

The Tribune did reflect some of Horace Greeley's idealist views. The journal retained Karl Marx as its London-based European correspondent in 1852. The arrangement provided Marx with much needed income during a period of his life in which his friend and collaborator Friedrich Engels could only provide limited financial support.[2] The arrangement, whereby Engels also submitted articles under Marx's by-line, lasted ten years, with the final Marx column being published in February 1862.[3]

In 1854 the paper joined the newly formed Republican Party—Greeley chose the party's name—and emphasized opposition to slavery. During the American Civil War (1861–1865) the Tribune usually spoke for the Radical Republican faction that was very hostile to the Confederacy and wanted slavery abolished immediately.

The paper generated a large readership, with a circulation of approximately 200,000 during the decade of the 1850s.[2] This made the paper the largest circulation daily in New York City and perhaps in the entire United States — gaining commensurate influence among voters and political decision-makers in the process.[5]

During the first few months of the war, the paper's "on to Richmond" slogan pressured Union general Irvin McDowell into advancing on the Confederate capital of Richmond before his army was ready, resulting in the defeat at the First Battle of Manassas on July 21, 1861. After the failure of the Peninsular Campaign in the spring of 1862, the Tribune pressured President Abraham Lincoln into installing John Pope as commander of the Army of Virginia. During the 1863 Draft Riots a mob tried to burn down the Tribune building which lacked the Gatling guns of the nearby New York Times. [6]

Following Greeley's defeat by Ulysses S. Grant for the presidency of the United States in 1872, Whitelaw Reid, owner of the New York Herald, assumed control of the Tribune. Greeley checked into Dr. Choate's Sanitarium where he died a few weeks later. Under Reid's son, Ogden Mills Reid, the paper acquired the New York Herald in 1924 to form the New York Herald Tribune, which continued to be run by Ogden M. Reid until his death in 1947. Copies of the New-York Tribune are available on microfilm at many large libraries and online at the Library of Congress.[7] Also, indices from selected years in the late nineteenth century are available on the Library of Congress' website. The original paper articles from the newspaper's morgue are kept at The Center for American History at the University of Texas at Austin. 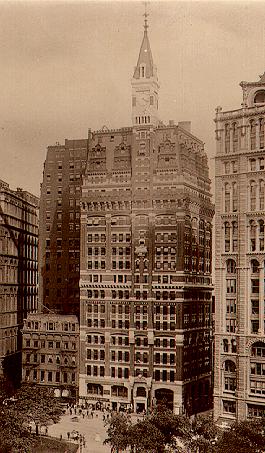 The New York Tribune building, today the site of One Pace Plaza

A "new" New York Tribune debuted in 1976 in New York City. The paper, which was originally named The News World and later changed to The New York City Tribune, was published by News World Communications, Inc., owned by the Unification Church. It was published in the former Tiffany and Company Building at 401 Fifth Avenue until it printed its last edition on January 3, 1991.[8] Its sister paper, The Washington Times, is circulated primarily in the nation's capital. The Tribune carried an expansive "Commentary" section of opinions and editorials. Former New York City Mayor Ed Koch was one of the columnists.