The Newport Folk Festival is an American annual folk-oriented music festival in Newport, Rhode Island, which began in 1959 as a counterpart to the previously established Newport Jazz Festival. The festival features performances by folk, blues, country, bluegrass and folk rock musicians, and since the 1990s has featured performers from related contemporary genres, such as alternative country, indie folk and folk punk. 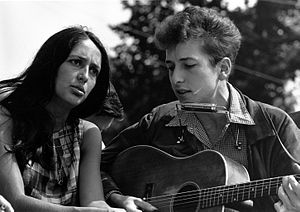 Baez and Dylan at Washington, 1963. The photograph was made by Rowland Scherman, on assignment for USIA to cover the March on Washington.

The Newport Folk Festival was founded in 1959 by George Wein, founder of the already-well-established Newport Jazz Festival, backed by its original board: Theodore Bikel, Oscar Brand, Pete Seeger and Albert Grossman.

The festival is renowned for introducing to a national audience a number of performers who went on to become major stars, most notably Joan Baez by her appearance as an unannounced guest of Bob Gibson in 1959, and Bob Dylan, in turn a guest of Baez at the 1963 festival. Newport was not strictly limited to folk performers. In the 1960s, Johnny Cash, Muddy Waters and Howlin' Wolf were featured. José Feliciano debuted in 1964. The festival also included many musicians from the pre-World War II country blues era who served to influence the American folk music revival of the 1950s and 1960s.

Bob Dylan's 1963 and 1964 performances solo and with Baez had made him popular with the Newport crowd, but on July 25, 1965 Dylan was booed by some fans when he played with backing from Mike Bloomfield on guitar and others from an electric blues/rock and roll band known as the Paul Butterfield Blues Band while headlining the festival. It is usually said that the reason for the hostile reception by a small number of fans was Dylan's "abandoning of the folk orthodoxy, or poor sound quality on the night (or a combination of the two). The controversy regarding the reaction of the audience at this event is often overplayed, as it was not the general reaction of the audience, but rather that of a small number of folk "purists", and of the organizers themselves, including Pete Seeger. The reaction of "the crowd" to Dylan's performance, certainly from eyewitness accounts, was generally quite enthusiastic. This performance, Dylan's first live "plugged-in" set of his professional career, marked the shift in his artistic direction from folk to rock, and had wider implications for both genres.

Despite the musical transition, Dylan's growing status within the larger counterculture ensured that his place in the expanding movement would remain secure.[1]

The Newport festival has run without interruption ever since 1985, although in a different form from its 1960s heyday; the event has gone from not-for-profit to for-profit, the crowd has shrunk from 20,000 to 10,000 and evening concerts have been canceled.[2] Furthermore, the festival has enlisted the aid of major sponsors, including Ben & Jerry's and Dunkin' Donuts. The 2007 festival featured musicians such as Linda Ronstadt, who was the Friday night headliner, in addition to other well known musicians such as the Allman Brothers Band, Emmylou Harris, Alejandro Escovedo, Cheryl Wheeler, Hazel Dickens and Ralph Stanley. In recent years, the folk festival has expanded to include performances from folk-influenced indie rock artists and acoustic rock bands, such as the Decemberists and the Low Anthem.

SPIN Magazine described the disparate music of the 2010 event as part of the festival's "rich history of uniting disparate genres of music...The one common thread: each artist's sound is celebration of American music, thus qualifying it as "folk," or "carriers of culture." [3]

Rolling Stone Magazine described the festival: "The venue featured plenty of high-energy performances from both old timers and young indie acts. There were veterans like Doc Watson, Ritchie [sic] Havens and John Prine alongside the manic O'Death and freak folk troupe Edward Sharpe and the Magnetic Zeros." [4]

In January 2011 it was announced that the festival has returned to being a non-profit event which will be produced under the umbrella of Newport Festivals Foundation, Inc.

The 2012 festival was headlined by My Morning Jacket and Jackson Browne, the former of which had their performance cut short due to inclement weather.

The Newport Folk Festival takes place every year at Fort Adams State Park, in Newport, Rhode Island. The Friday evening before the festival kicks off for the weekend with a performance at the International Tennis Hall of Fame in downtown Newport. Fort Adams houses four stages, the main one of which sits looking out at Newport harbor and the famous Claiborne Pell Bridge. The festival is known for its beautiful setting- as the music blog Consequence of Sound puts it, "Located at the gorgeously scenic Fort Adams, in Newport, Rhode Island, glimmering, clear blue water surrounds the small vivid green peninsula. Look out from the fort towers and you’ll see hundreds of beautiful boats rocking along the water." (Consequence of Sound). My Morning Jacket frontman Jim James told Spin Magazine, "You've got the sun on your skin and the breeze in your hair. It's magical here... It's just magical." (SPIN at Newport Folk 2010) Brandi Carlile says "It's one of my favorites so far if not my favorite." (Brandi Carlile Interview)

WMVY began streaming the festival in 2005 and was joined by NPR Music in 2008. WMVY's Archives contains both performances and interviews from Newport Folk and NPR music has recorded sets available for listening here: NPR at Newport Folk 2010.

The festival has made efforts in being green-friendly, teaming with many groups to do so. They partnered with Clean Water Action and Rhode Island Resource Recovery to collect 1.5 tons of recyclables. CWA worked onsite picking up trash and recycling, and set up composting stations to curb the waste generated during the event. A portion of beer and wine sales went to CWA to support their work. The official beer of the festival, Vermont-based Magic Hat used plant-based, 100% compostable cups. The festival also partnered with CLIF Bar, who set up a bike valet to encourage people to cycle to the event and participate in their 2-Mile Challenge. They worked with New England Wind Fund to offset power used during the festival, and Klean Kanteen to provide reusable water bottles. They also partnered with Farm Fresh Rhode Island to incorporate local foods into the vendors' fare.

Beginning in 1998, a multi-act bill, only loosely centered around folk music, has toured the United States under the Newport Folk Festival Tour moniker.

Albums recorded at the festival