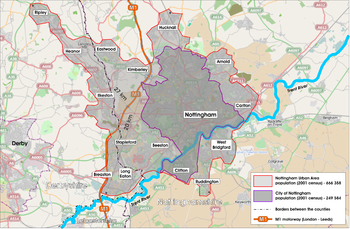 The Nottingham Built-up Area or Nottingham Urban Area is an area of land defined by the Office for National Statistics, consisting of the city of Nottingham and the adjoining urban areas of Nottinghamshire and Derbyshire, in the East Midlands of England. It had a total population of 729,977 at the time of the 2011 census.[1] An increase of almost 10% since the 2001 census recorded population of 666,358.[2]

Greater Nottingham is largely within the three districts of Rushcliffe, Broxtowe and Gedling surrounding the city, though the area spills into the Nottinghamshire district of Ashfield, and also to the Amber Valley and Erewash districts of Derbyshire. The Nottingham Urban Area is, by the ONS' figures, the 8th largest in England, with a size between that of the Tyneside Built-up area and Sheffield Urban Area.