Long Eaton is a town in the Erewash district of Derbyshire, England. It lies just north of the River Trent about 7 miles (11 km) southwest of Nottingham and is part of the Nottingham Urban Area (the conurbation around Nottingham) but not part of the City of Nottingham. The population of the town was 37760 at the 2011 Census.[1] The town is 9 miles east of the city of Derby. Since 1 April 1974, Long Eaton has been part of Erewash borough.

Long Eaton is referred to as Aitone, in the Domesday Book. Several meanings are associated with this name, for example "farm between streams" or "low lying land". This agricultural settlement grew up close to the lowest bridging point of the River Erewash.

In 1228 the village gained the "Long" prefix due to its length. The cottages and farms straggled along the Market Place, High Street and Main Street.

The "Great Fire of Long Eaton" ripped through 14 houses and several other building in the Market Place destroying them in 1694.[2]

The village remained a constant size until the coming of the railways in the nineteenth century. The Midland Counties Railway in 1839 and the Erewash Valley Line in 1844 provided transport links which encouraged growth. Two industries came to employ many people in the growing town, lace-making and railway wagon manufacturing. A large railway yard at Toton Sidings grew just north of the town.

By 1900 the town had grown to have a population of over 10,000. It had expanded with the construction of many new houses, business premises and factories throughout the Victorian period. In 1921 Long Eaton's boundaries were extended bringing Wilsthorpe and parts of both Sandiacre and Sawley into the town. 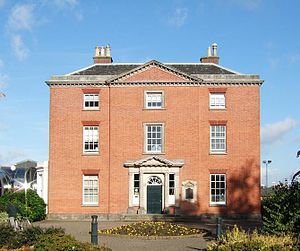 A notable building in the town is the Palladian Long Eaton Hall. This was originally a private residence, but is now occupied by the borough council, and is attached to the Long Eaton Town Hall complex, which opened in 1991.

The Parish Church of St. Laurence stands to the east of the Market Place. Local tradition dates the church to the 11th century, possibly built under King Cnut. However, it is more likely that it dates to after the Norman Conquest, possibly into the 12th century. It was originally a daughter church of All Saints, Sawley, but gained its independence in the 19th century. 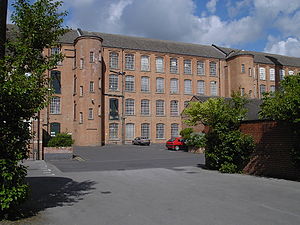 There are several fine examples of industrial architecture in Long Eaton. Most are connected with the town's development as a lace-making centre. By 1907, the town housed almost 1,400 lace machines and the industry employed over 4,000 people (a quarter of the population). One of the largest lace-making mills, Harrington Mill, was built in 1885. It took one and a quarter million bricks to build the 167 metre long factory and it has 224 cast-iron windows down one side.[3] Harrington Mill is a traditional, four-storey, red lace mill, built by a consortium of lace manufacturers. The turrets on the sides of the building house the original staircases.[4]

A glance above the shops on High Street and the Market Place can reveal some interesting architecture. A large part of the centre is made of Victorian and early twentieth century architecture. The New Century Buildings are a good example of late Victorian architecture. 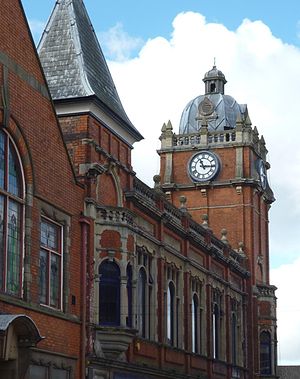 In general Long Eaton's main shopping streets have retained more character than those of most towns of its size.

The High Street and Market Place were pedestrianised during the 1990s and in 2010 work to enhance and improve the layout and paving of Long Eaton town centre was completed.

The main road through the town forms part of the A6005 and junction 25 of the M1 motorway is located on its north western border.

The Long Eaton railway station is on the Midland Main Line and the Erewash Canal passes through the town.

Long Eaton is in the County of Derbyshire on the border with Nottinghamshire and Leicestershire. Most residences have a Nottingham address with the Nottingham postcode prefix NG, and use the Nottingham telephone area code 0115.

It is a common misconception that Long Eaton is part of Nottinghamshire.[5] The reason for the NG prefix in the postal code is that all mail for Long Eaton first goes to Royal Mail's Nottingham sorting office in Beeston (hence the 'NG'), and then to Long Eaton's delivery office on Tamworth Road. Derbyshire can be used in place of the Posttown, Nottingham in postal addresses for Long Eaton. Royal Mail does not use the county of Notts or Nottinghamshire.

Many border towns like Long Eaton have crossover postcodes. A few miles South of Long Eaton is a town called Castle Donington - it is in Leicestershire but has a DE74 postcode for Derby. Another example would be Worksop; it has a S80/S81 postcode which is used for Sheffield in South Yorkshire, but the town itself is in Nottinghamshire.[6]

The Local Government Commission for England (1958 - 1967) recommended that Long Eaton became part of an enlarged Nottingham City Council. This was not the only time Long Eaton's status in Derbyshire was threatened as the original draft of the Local Government Act 1972 had considered moving Long Eaton into Nottinghamshire. The Redcliffe-Maud Report proposals of 1969 also recommended the town be moved into Nottinghamshire but the incoming Conservative administration rejected the proposal. This issue has rumbled on over many years.

Long Eaton has two state secondary schools, The Long Eaton School and Wilsthorpe Community School as well as several primary schools. It is also home to the public school Trent College, with the Elms School for children from 3-11.

The Long Eaton School was split into two separate sites. One known as 'Lower' for years 7, 8 and 9, and one known as 'Upper' for years 10, 11 and Sixth Form. Lower school (opened in 1965) was demolished in 2006, after a new school was built next door on the same grounds. Both upper and lower sections of the school are now in one building. Previously, the sections were separated by the Erewash Canal. In 2005 Wilsthorpe School gained specialist status in business and enterprise. The Long Eaton School has also gained specialist status in science and has received the permanent eco-flag. The Long Eaton School was recently rebuilt, and was opened by Gordon Brown when he was Chancellor of the Exchequer. The Long Eaton School is partnered with many international schools and has frequent visits from international students. The School has also recently gained academy status and thus has had a telescope built on school grounds. The school has also undergone many changes within the school and school life.[citation needed]

Long Eaton also has a successful brass band, the Long Eaton Silver Prize Band, which is one of only two brass bands still functioning in Erewash. The band was formed in 1906 as a result of severance from the local Temperance Society. At the height of its success, it reached the Brass Band Second Section. The original Silver Prize Band club on Sailsbury Street in Long Eaton has since closed down early 2015 - however the band itself continues to operate.

Long Eaton Speedway raced at the Long Eaton Stadium on Station Road, the first meeting was held on 18 May 1929.[7][8] The Long Eaton Invaders became National Speedway Champions in 1984. However, the Speedway stadium closed in 1997. The former area of the speedway stadium has now been recreated into a whole new estate of houses and flats to let and buy, and a partial playing field for Grange Primary School.

Long Eaton United F.C. play in the Midland Football League as founder members in 2014. The club were formed in 1956 but records show that a team has been part of the town for many years including Long Eaton Town FC. The Football Club has many junior sides and gained FA Charter Standard Community Club status in 2013. They also have a Ladies team who compete in the East Midlands Womens Football League

The town also has a Rugby club, Long Eaton RFC.