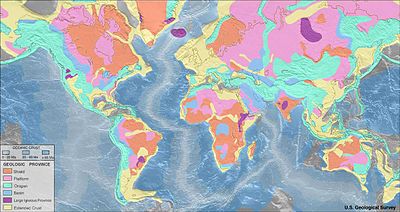 Geologic provinces of the World (USGS)

Orogeny refers to forces and events leading to a large structural deformation of the Earth's lithosphere (crust and uppermost mantle) due to the interaction between tectonic plates. Orogens or orogenic belts develop when a continental plate is crumpled and is pushed upwards to form mountain ranges, and involve a great range of geological processes collectively called orogenesis.[1][2] The word "orogeny" comes from the Greek (oros for "mountain" plus genesis for "creation" or "origin"),[3] and it is the primary mechanism by which mountains are built on continents. Geomorphology is the study of landforms and the processes that shape them. 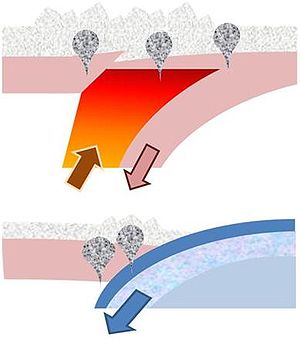 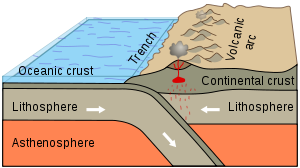 Subduction of an oceanic plate by a continental plate to form a noncollisional orogen. (example: the Andes)

Orogeny usually produces long arcuate (from arcuare, to bend like a bow) structures, known as orogenic belts. Generally, orogenic belts consist of long parallel strips of rock exhibiting similar characteristics along the length of the belt. Orogenic belts are associated with subduction zones, which consume crust, produce volcanoes, and build island arcs. The arcuate structure is attributed to the rigidity of the descending plate, and island arc cusps are related to tears in the descending lithosphere.[6] These island arcs may be added to a continent during an orogenic event.

The processes of orogeny can take tens of millions of years and build mountains from plains or the ocean floor. The topographic height of orogenic mountains is related to the principle of isostasy,[7] that is, a balance of the downward gravitational force upon an upthrust mountain range (composed of light, continental crust material) and the buoyant upward forces exerted by the dense underlying mantle.[8]

Frequently, rock formations that undergo orogeny are severely deformed and undergo metamorphism. During orogeny, deeply buried rocks may be pushed to the surface. Sea bottom and near shore material may cover some or all of the orogenic area. If the orogeny is due to two continents colliding, the resulting mountains can be very high (see Himalayas).

An orogenic event may be studied as: (a) a tectonic structural event, (b) as a geographical event, and (c) a chronological event. Orogenic events: (a) cause distinctive structural phenomena related to tectonic activity, (b) affect rocks and crust in particular regions, and (c) happen within a specific period.

An orogeny produces an orogen, or (mountain) range-foreland basin system.

The foreland basin forms ahead of the orogen due mainly to loading and resulting flexure of the lithosphere by the developing mountain belt. A typical foreland basin is subdivided into a wedge-top basin above the active orogenic wedge, the foredeep immediately beyond the active front, a forebulge high of flexural origin and a back-bulge area beyond, although not all of these are present in all foreland basin systems. The basin migrates with the orogenic front and early deposited foreland basin sediments become progressively involved in folding and thrusting. Sediments deposited in the foreland basin are mainly derived from the erosion of the actively uplifting rocks of the mountain range, although some sediments are derived from the foreland. The fill of many such basins shows a change in time from deepwater marine (flysch-style) through shallow water to continental (molasse-style) sediments.[9]

Although orogeny involves plate tectonics, the tectonic forces result in a variety of associated phenomena, including magmatism, metamorphism, crustal melting, and crustal thickening. What exactly happens in a specific orogen depends upon the strength and rheology of the continental lithosphere, and how these properties change during orogenesis.

In addition to orogeny, the orogen once formed is subject to other processes, such as sedimentation and erosion.[2] The sequence of repeated cycles of sedimentation, deposition and erosion, followed by burial and metamorphism, and then by formation of granitic batholiths and tectonic uplift to form mountain chains, is called the orogenic cycle.[10][11] For example, the Caledonian Orogeny refers to the Silurian and Devonian events that resulted from the collision of Laurentia with Eastern Avalonia and other former fragments of Gondwana. The Caledonian Orogen resulted from these events and various others that are part of its peculiar orogenic cycle.[12]

In summary, an orogeny is a long-lived deformational episode during which many geological phenomena play a role. The orogeny of an orogen is only part of the orogen's orogenic cycle.

Erosion is a subsequent phase of the orogenic cycle. Erosion inevitably removes much of the mountains, exposing the core or mountain roots (metamorphic rocks brought to the surface from a depth of several kilometres). Such exhumation may be helped by isostatic movements balancing out the buoyancy of the evolving orogen. Debate exists about the extent to which erosion modifies the patterns of tectonic deformation (see erosion and tectonics). Thus, the final form of the majority of old orogenic belts is a long arcuate strip of crystalline metamorphic rocks sequentially below younger sediments which are thrust atop them and dip away from the orogenic core.

An orogen may be almost completely eroded away, and only recognizable by studying (old) rocks that bear traces of orogenesis. Orogens are usually long, thin, arcuate tracts of rock that have a pronounced linear structure resulting in terranes or blocks of deformed rocks, separated generally by suture zones or dipping thrust faults. These thrust faults carry relatively thin slices of rock (which are called nappes or thrust sheets, and differ from tectonic plates) from the core of the shortening orogen out toward the margins, and are intimately associated with folds and the development of metamorphism.[13]

The study of orogeny, coupled with biogeography (the study of the distribution and evolution of flora and fauna),[14] geography and mid ocean ridges in the 1950s and 1960s, contributed greatly to the theory of plate tectonics. Even at a very early stage, life played a significant role in the continued existence of oceans, by affecting the composition of the atmosphere. The existence of oceans is critical to sea-floor spreading and subduction.[15][16] 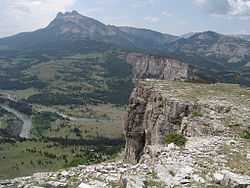 An example of thin-skinned deformation (thrust faulting) of the Sevier Orogeny in Montana. Note the white Madison Limestone repeated, with one example in the foreground (that pinches out with distance) and another to the upper right corner and top of the picture.

Sierra Nevada Mountains (a result of delamination) as seen from the International Space Station.

Mountain formation occurs through a number of mechanisms.[17][18][19]

Large modern orogenies often lie on the margins of continents; the Alleghenian (Appalachian), Laramide, and Andean orogenies are examples of these in the Americas. Older inactive orogenies, such as the Algoman, Penokean and Antler, are represented by deformed rocks and sedimentary basins further inland.

Areas that are rifting apart, such as mid-ocean ridges and the East African Rift, have mountains due to thermal buoyancy related to the hot mantle underneath them; this thermal buoyancy is known as dynamic topography. In strike-slip orogens, such as the San Andreas Fault, restraining bends result in regions of localized crustal shortening and mountain building without a plate-margin-wide orogeny. Hotspot volcanism results in the formation of isolated mountains and mountain chains that are not necessarily on tectonic plate boundaries.

Finally, uplift and erosion related to epeirogenesis (large-scale vertical motions of portions of continents without much associated folding, metamorphism, or deformation)[24] can create local topographic highs. 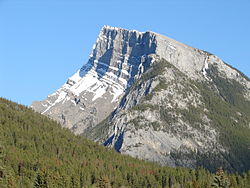 Mount Rundle on the TransCanada Highway between Banff and Canmore provides a classic example of a mountain cut in dipping-layered rocks. Millions of years ago a collision caused an orogeny forcing horizontal layers of an ancient ocean crust to be thrust up at an angle of 50–60°. That left Rundle with one sweeping, tree-lined smooth face, and one sharp, steep face where the edge of the uplifted layers are exposed.[25]

The collision causing the Columbia Orogeny occurred about 175 million years ago, and as the shock wave moved eastward, it forced huge masses of rock to crack and slide up over its neighbours. This is known as thrust faulting and was instrumental in the formation of the Rockies. The shock wave began piling up the western ranges, and then the main ranges, around 120 million years ago.

Before the development of geologic concepts during the 19th century, the presence of marine fossils in mountains was explained in Christian contexts as a result of the Biblical Deluge. This was an extension of Neoplatonic thought, which influenced early Christian writers[citation needed]. The 13th-century Dominican scholar Albert the Great posited that, as erosion was known to occur, there must be some process whereby new mountains and other land-forms were thrust up, or else there would eventually be no land; he suggested that marine fossils in mountainsides must once have been at the sea-floor.

Orogeny was used by Amanz Gressly (1840) and Jules Thurmann (1854) as orogenic in terms of the creation of mountain elevations, as the term mountain building was still used to describe the processes.

Elie de Beaumont (1852) used the evocative "Jaws of a Vise" theory to explain orogeny, but was more concerned with the height rather than the implicit structures created by and contained in orogenic belts. His theory essentially held that mountains were created by the squeezing of certain rocks.

Eduard Suess (1875) recognised the importance of horizontal movement of rocks. The concept of a precursor geosyncline or initial downward warping of the solid earth (Hall, 1859) prompted James Dwight Dana (1873) to include the concept of compression in the theories surrounding mountain-building. With hindsight, we can discount Dana's conjecture that this contraction was due to the cooling of the Earth (aka the cooling Earth theory).

The cooling Earth theory was the chief paradigm for most geologists until the 1960s. It was, in the context of orogeny, fiercely contested by proponents of vertical movements in the crust (similar to tephrotectonics), or convection within the asthenosphere or mantle.

In terms of recognising orogeny as an event, Leopold von Buch (1855) recognised that orogenies could be placed in time by bracketing between the youngest deformed rock and the oldest undeformed rock, a principle which is still in use today, though commonly investigated by geochronology using radiometric dating.

The advent of plate tectonics has explained the vast majority of orogenic belts and their features. The cooling earth theory (principally advanced by Descartes) is dispensed with, and tephrotectonic style vertical movements have been explained primarily by the process of isostasy.

Some oddities exist, where simple collisional tectonics are modified in a transform plate boundary, such as in New Zealand, or where island arc orogenies, for instance in New Guinea occur away from a continental backstop. Further complications such as Proterozoic continent-continent collisional orogens, explicitly the Musgrave Block in Australia, previously inexplicable (see Dennis, 1982) are being brought to light with the advent of seismic imaging techniques which can resolve the deep crust structure of orogenic belts.