Our Lady of the Rosary

Visions of Our Lady of the Rosary 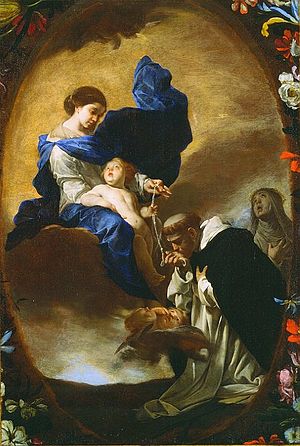 According to Dominican tradition, in 1206, St. Dominic was in Prouille, France, attempting to convert the Albigensians back to the Catholic faith. The young priest had little success until one day he received a vision of the Blessed Virgin, who gave him the Rosary as a tool against heretics.[1] While Mary's giving the rosary to St. Dominic is generally acknowledged as a legend, the development of this prayer form owes much to the followers of St. Dominic, including the 15th-century priest and teacher, Alanus de Rupe.[2]

On December 3, 1836, Fr. Charles Eléonor des Genettes had an interior locution directing him to dedicate the parish of Our Lady of Victory to the Immaculate Heart of Mary.[3]

In 1987, during the civil war with the anti-clerical Sandinista government in Nicaragua, sacristan Bernardo Martinez reported seeing an apparition of Our Lady who urged him to pray the rosary and work for peace. One of the appearances was in the parish church of Our Lady of Victories near Cuapa.

Our Lady of Victory

In 1571, Pope St. Pius V organized a coalition of forces from Spain and smaller Christian kingdoms, republics and military orders, to rescue Christian outposts in Cyprus, particularly the Venetian outpost at Famagusta which, however, surrendered after a long siege on August 1 before the Christian forces set sail. On October 7, 1571, the Holy League, a coalition of southern European Catholic maritime states, sailed from Messina, Sicily, and met a powerful Ottoman fleet in the Battle of Lepanto. Knowing that the Christian forces were at a distinct materiel disadvantage, the holy pontiff, Pope Pius V, called for all of Europe to pray the Rosary for victory,[5][6] and led a rosary procession in Rome.[7]

After about five hours of fighting on the northern edge of the Gulf of Corinth, off western Greece, the combined navies of the Papal States, Venice and Spain managed to stop the Ottoman navy, slowing the Ottoman advance to the west and denying them access to the Atlantic Ocean and the Americas.[8] If the Ottomans had won then there was a real possibility that an invasion of Italy could have followed so that the Ottoman sultan, already claiming to be emperor of the Romans, would have been in possession of both New and Old Rome.[9] Combined with the unfolding events in Morocco where the Sa’adids successfully spurned the Ottoman advances, it confined Turkish naval power to the eastern Mediterranean.[8] Although the Ottoman Empire was able to build more ships, it never fully recovered from the loss of trained sailors and marines, and was never again the Mediterranean naval power it had become the century before when Constantinople fell.

Our Lady of Victory

Pius V then instituted "Our Lady of Victory" as an annual feast to commemorate the victory, which he attributed to the Blessed Virgin Mary.[7]

Our Lady of the Holy Rosary

In 1573, Pope Gregory XIII changed the title of the "Feast of Our Lady of Victory" to "Feast of the Holy Rosary".[10] Pope Clement XI extended the feast to the whole of the Latin Rite, inserting it into the General Roman Calendar in 1716, and assigning it to the first Sunday in October. Pope St. Pius X changed the date to October 7 in 1913, as part of his effort to restore celebration of the liturgy of the Sundays. In 1960 Pope John XXIII changed the title to "Feast of Our Lady of the Rosary".

Our Lady of the Rosary is the patron saint of several places around the world. The diocese of Malaga, Spain (which, however celebrates her patronage on September 8), and the Spanish cities of Melilla and Trujillo celebrate Our Lady of Victories as their patroness. Furthermore, María del Rosario is a common female Spanish name (colloquially abbreviated to Rosario or Charo). Rosario can also be used as a male first name, particularly in Italian.

Churches named for Our Lady of the Rosary

Churches named for Our Lady of Victory 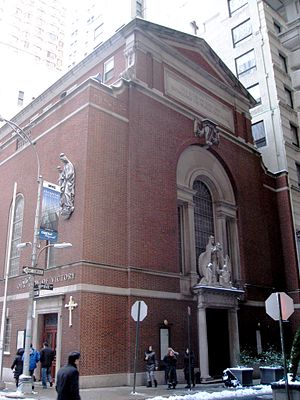 Although the title Our Lady of Victory has been superseded to some extent by that of Our Lady of the Rosary, the former is still in popular use at a number of parishes and schools.

Notre-Dame-des-Victoires, Paris is an historic Marian shrine and place of pilgrimage. Augustinian friars built it in 1629 with financial assistance from Louis XIII, who named the church Notre-Dame des Victoires in gratitude for the victory of French forces over the Huguenots at the Siege of La Rochelle (1627-8).[14]

Notre-Dame-des-Victoires, San Francisco was founded in 1856 to serve French Catholic immigrants to California. In 1887, Pope Leo signed the decree putting l'Eglise Notre Dame des Victoires in charge of the Marists, and making it a French National Church. The church was rebuilt in 1915 after the Earthquake and Fire of 1906, and was declared an historical landmark in 1984.

Our Lady of Victory National Shrine and Basilica is located in Lackawanna, New York.[15] Our Lady of Victory is the cathedral church for the Diocese of Victoria, Texas.[16] The church of Our Lady of Victory, also known as the War Memorial Church, in the financial district of Manhattan, New York City, was dedicated to Our Lady of Victory by Francis Cardinal Spellman, archbishop of New York and apostolic vicar for the U.S. Armed Forces on June 23, 1947 " ... in Thanksgiving for Victory won by our valiant dead, our soldiers' blood, our country’s tears, shed to defend men’s rights and win back men’s hearts to God."[17] The chapel at St. Catherine University, St. Paul, Minnesota, is named for Our Lady of Victory, and is listed on the National Register of Historic Places.[18]

St. Mary of Victories Hungarian Catholic Church is located in St. Louis, Missouri.[19] St. Mary's was built in 1843, and is the second oldest Catholic Church within the city limits. Originally home to German immigrants, the parish became home to the Hungarian Community in 1957 and is the official Hungarian Church for the Archdiocese of St. Louis. The church also enjoys St. Stephen of Hungary as a co-patron. The church is one of the few consecrated churches in the archdiocese,[clarification needed] having been granted that designation by Pope Pius IX. The high altar and side altars within the church are home to around 280 relics, many given by Pope Leo XIII upon the occasion of granting an indulgence to the altar. Among the notable historical figures associated with the church, Blessed Francis Xavier Seelos, C.Ss.R., itinerant German Redemptorist priest, preached a parish mission for two weeks in October 1865. St. Mary's is in possession of a 1st class relic of Fr. Seelos, and one of the 5 known death masks made of the pending saint. The Franciscan Sisters of St. Mary also got their start (and their name) at this parish, and went on to found the SSM Health System based in St. Louis.