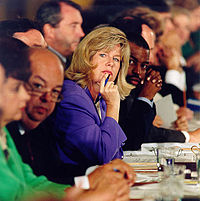 The Parents Music Resource Center (PMRC) was an American committee formed in 1985 with the stated goal of increasing parental control over the access of children to music deemed to be violent, have drug use or be sexual via labeling albums with Parental Advisory stickers. The committee was founded by four women: Tipper Gore, wife of Senator and later Vice President Al Gore; Susan Baker, wife of Treasury Secretary James Baker; Pam Howar, wife of Washington realtor Raymond Howar; and Sally Nevius, wife of former Washington City Council Chairman John Nevius. They were known as the "Washington wives" – a reference to their husbands' connections with government in the Washington, D.C. area. The term was also a play on the title of Ira Levin's book, The Stepford Wives. The Center eventually grew to include 22 participants.

As a method of combating this alleged problem, the PMRC suggested a voluntary move by the RIAA and the music industry to develop "guidelines and/or a rating system" similar to the MPAA film rating system. Additional suggestions from the PMRC that appeared in an article in the Washington Post included: printing warnings and lyrics on album covers, forcing record stores to put albums with explicit covers under the counters, pressuring television stations not to broadcast explicit songs or videos, "reassess[ing]" the contracts of musicians who performed violently or sexually in concert, and creating a panel to set industry standards. This article led to the removal of rock music and magazines from American stores including Wal-Mart, J. C. Penney, Sears and Fred Meyer.[citation needed]

The PMRC also released the Filthy Fifteen, a list of the 15 songs they found most objectionable:

[1] In August 1985, 19 record companies agreed to put "Parental Guidance: Explicit Lyrics" labels on albums to warn of explicit lyrical content. Before the labels could be put into place, the Senate agreed to hold a hearing on so-called "porn rock". This began on September 19, 1985, when representatives from the PMRC, three musicians -- Dee Snider, Frank Zappa, John Denver—and Senators Paula Hawkins and Al Gore testified before the Senate Commerce, Science and Transportation Committee on "the subject of the content of certain sound recordings and suggestions that recording packages be labeled to provide a warning to prospective purchasers of sexually explicit or other potentially offensive content."

Paula Hawkins presented three record covers (Pyromania by Def Leppard, W.O.W. by Wendy O. Williams and W.A.S.P. by W.A.S.P.) and the music videos for "Hot for Teacher" by Van Halen, and "We're Not Gonna Take It" by Twisted Sister, commenting: "Much has changed since Elvis' seemingly innocent times. Subtleties, suggestions, and innuendo have given way to overt expressions and descriptions of often violent sexual acts, drug taking, and flirtations with the occult. The record album covers to me are self-explanatory."

Susan Baker testified that "There certainly are many causes for these ills in our society, but it is our contention that the pervasive messages aimed at children which promote and glorify suicide, rape, sadomasochism, and so on, have to be numbered among the contributing factors." Tipper Gore asked record companies to voluntarily "plac[e] a warning label on music products inappropriate for younger children due to explicit sexual or violent lyrics."

National PTA Vice President for Legislative Activity Millie Waterman related the PTA's role in the debate, and proposed printing the symbol "R" on the cover of recordings containing "explicit sexual language, violence, profanity, the occult and glorification of drugs and alcohol," and providing lyrics for "R"-labeled albums.

In addition, Dr. Joe Stuessy, a music professor at the University of Texas at San Antonio, spoke regarding the power of music to influence behavior. He argued that heavy metal was different from earlier forms of music such as jazz and rock and roll because it was "church music" and "had as one of its central elements the element of hatred." Dr. Paul King, a child and adolescent psychiatrist, testified on the deification of heavy metal musicians, and to the presentation of heavy metal as a religion. He also stated that "many" adolescents read deeply into song lyrics.

During his statement, musician and producer Frank Zappa asserted that "the PMRC proposal is an ill-conceived piece of nonsense which fails to deliver any real benefits to children, infringes the civil liberties of people who are not children, and promises to keep the courts busy for years dealing with the interpretation and enforcement problems inherent in the proposal's design." He went on to state his suspicion that the hearings were a front for H.R. 2911, a proposed blank tape tax: "The major record labels need to have H.R. 2911 whiz through a few committees before anybody smells a rat. One of them is chaired by Senator Thurmond. Is it a coincidence that Mrs. Thurmond is affiliated with the PMRC?" Zappa had earlier stated about the Senate's agreement to hold a hearing on the matter that "A couple of blowjobs here and there and Bingo! — you get a hearing."[2]

Folk rock musician John Denver stated he was "strongly opposed to censorship of any kind in our society or anywhere else in the world", and that in his experience censors often misinterpret music, as was the case with his song "Rocky Mountain High". In addition, Denver expressed his belief that censorship is counterproductive: "That which is denied becomes that which is most desired, and that which is hidden becomes that which is most interesting. Consequently, a great deal of time and energy is spent trying to get at what is being kept from you." When Denver came up to give his speech, many on the PMRC board expected him to side with them, thinking he would be offended by the lyrics as well.[citation needed]

Dee Snider, frontman and lead singer of the heavy metal band Twisted Sister, testified that he "[did] not support [...] [RIAA president] Gortikov's unnecessary and unfortunate decision to agree to a so-called generic label on some selected records".[3] Like John Denver, Snider felt that his music had been misinterpreted. He defended the Twisted Sister songs "Under the Blade", which had been interpreted as referring to sadomasochism, bondage, and rape, and "We're Not Gonna Take It", which had been accused of promoting violence. Snider said about "Under the Blade", a song Snider claimed was written about an impending surgery, that "the only sadomasochism, bondage, and rape in this song is in the mind of Ms. Gore." He stated, "Ms. Gore was looking for sadomasochism and bondage, and she found it. Someone looking for surgical references would have found it as well." Snider concluded that "The full responsibility for defending my children falls on the shoulders of my wife and I, because there is no one else capable of making these judgments for us."

Notable snippets of audio from the hearing found their way into Zappa's audiocollage "Porn Wars", released on the Frank Zappa Meets the Mothers of Prevention album. Senators Gore, Hollings, Gorton, Hawkins, and others appeared. The album cover featured a parody of the RIAA warning label. The LP included a note to listeners to send to Zappa's Barking Pumpkin Records for a free Z-PAC, a printed information package that included transcripts of the committee hearing, and a letter from Zappa encouraging young people to register to vote. Zappa's full testimonial was released on a posthumous 2010 compilation called Congress Shall Make No Law...

On November 1, 1985, before the hearing ended, the RIAA agreed to put "Parental Advisory" labels on selected releases at their own discretion. The labels were generic, unlike the original idea of a descriptive label categorizing the explicit lyrics.

Many record stores refused to sell albums containing the label (most notably Wal-Mart), and others limited sales of those albums to adults. One of the albums to receive the "Parental Advisory" sticker was Frank Zappa's Grammy-winning album Jazz from Hell, presumably for the use of the word "Hell" in its title but also for the song "G-Spot Tornado", even though it is a collection of instrumental pieces and contains no lyrics at all.

Many musicians have criticized or parodied the PMRC and Tipper Gore:

Yo Tip, what's the matter? You ain't gettin' no dick?
You're bitchin' about rock'n'roll, that's censorship, dumb bitch
The Constitution says we all got a right to speak
Say what we want Tip, your argument is weak

In his book The Ice Opinion, Ice-T wrote, "Tipper Gore is the only woman I ever directly called a bitch on any of my records, and I meant that in the most negative sense of the word".[7] On "You Shoulda Killed Me Last Year", his spoken-word outro to his album O.G. Original Gangster , he curses the CIA, the LAPD, FBI, George H. W. Bush and Tipper Gore.

Our records have stickers, with a warning from Tipper
'Coz they're no good for kids, if we'd get her we'd strip her

"WARNING: The inside fold out to this record cover is a work of art by H.R. Giger that some people may find shocking, repulsive or offensive. Life can sometimes be that way." [11]

"To burn the {flag} and replace it with a Parental Advisory sticker/
To spit liquor in the faces of this democracy of hypocrisy/
Fuck you Ms. Cheney, Fuck you Tipper Gore." [12]

Eminem also included Lynne Cheney owing to her activism - similiar to that of Tipper Gore's - in the early 2000's. It is also worth pointing out that Eminem's reference to burning the flag was censored on the album release, adding a twist of irony to his claims here.

It is uncertain whether the "Tipper sticker" is effective in preventing children from being exposed to explicit content.[13] Some suggest that the sticker actually increases record sales. Philip Bailey stated that "For the most part [the sticker] might even sell more records in some areas - all you've got to do is tell somebody this is a no-no and then that's what they want to go see."[13] Ice-T's "Freedom of Speech" states that "Hey PMRC, you stupid fuckin' assholes/The sticker on the record is what makes 'em sell gold./Can't you see, you alcoholic idiots/The more you try to suppress us, the larger we get." And the Furnaceface song "We Love You, Tipper Gore", from 1991's album Just Buy It, suggests that the label "only whets my appetite ... only makes us want to hear it that much more".