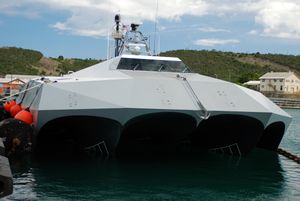 All five hulls are visible in this picture of the bow of M80 Stiletto, a US Navy demonstration ship.

A pentamaran is a multihull vessel with five hulls, a further extension of the ideas behind trimarans (three hulls) and catamarans (two hulls).

There are two primary types of pentamaran.

The parallel pentamaran consists of five almost equally narrow hulls in a side-by-side fashion, as in the M80 Stiletto, also known as an M-Hull.[citation needed] Historically, ships have evolved to become narrower and deeper to achieve speed and stability. The M Hull however becomes wider, because its distinctively wide hull captures the vessel’s bow wave and redirects the energy under the hull. These pentamarans can be very fast when planing yet quite stable in rough seas for a small ship. In addition, these ships offer plenty of space due to their width, although they do not have a lot of space belowdecks. Their shallow draught also makes them suited for shallow waters.[1]

Outrigger type pentamarans may be likened to an evolved trimaran, with a long and narrow central hull at least 50 metres long, and two pairs of outriggers - one pair aft, one pair amidships - as opposed to the trimaran's single pair. Going with the current trend of fast conventional hulls in naval shipbuilding, the pentamaran is based upon a narrow but long hull, that is deeper than it is wide, so that it cuts through waves. The outriggers then provide the stability such a narrow hull needs. While the aft sponsons act as trimaran sponsons do, the front sponsons do not touch the water normally; only if the ship edges to one side they do, in which case the sponsons will slow the ship and level it up until the ship is stable again.[2] BMT Group, a shipbuilding and engineering company located in the United Kingdom, has proposals for a fast cargo ship and a yacht using this kind of hull.[3]