The Persian alphabet (الفبای فارسی alefbā-ye fārsi) or Perso-Arabic script is a writing system based on the Arabic script and used for the Persian language. It has four letters more than Arabic: پ [p], چ [t͡ʃ], ژ [ʒ], and گ [ɡ].

A characteristic feature of this script, possibly tracing back to Ancient Egyptian hieroglyphs, is that vowels are underrepresented. For example, in Classical Arabic, of the six vowels, the three short ones are normally entirely omitted (although certain diacritics are added to indicate them in special circumstances, notably in the Qur'an), while the three long ones are represented ambiguously by certain consonants.

The replacement of the Pahlavi script with the Arabic script in order to write the Persian language was done by the Tahirids in 9th century Khurasan.[1][2] 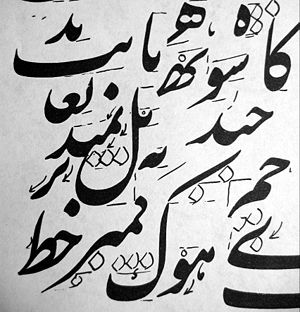 Below are the 32 letters of the modern Persian alphabet. Since the script is cursive, the appearance of a letter changes depending on its position: isolated, initial (joined on the left), medial (joined on both sides), and final (joined on the right) of a word.

The names of the letter are mostly the ones used in Arabic, except for the Persian pronunciation. The only ambiguous name is he, which is used for both ﺡ and ه. For clarification, these are often called ḥe-ye jimi (literally "jim-like ḥe" after jim, the name for the letter ج that uses the same base form) and he-ye do-češm (literally "two-eyed he", after the contextual middle letterform ﻬ), respectively.

Letters which do not link to a following letter

Seven letters – و, ژ, ﺯ, ﺭ, ﺫ, ﺩ, ﺍ – do not connect to a following letter as the rest of the letters of the alphabet do. These seven letters have the same form in isolated and initial position, and a second form in medial and final position. For example, when the letter ا "alef" is at the beginning of a word such as اینجا "injā" (here), the same form is used as in an isolated "alef". In the case of امروز "emruz" (today), the letter ﺮ "re" takes the final form and the letter و "vāv" takes the isolated form, though they are in the middle of the word, and ﺯ also has its isolated form, though it occurs at the end of the word.

The following are not actual letters but different orthographical shapes for letters, and in the case of the lām alef, a ligature. As to ﺀ hamze, it has only a single graphic, since it is never tied to a preceding or following letter. However, it is sometimes 'seated' on a vāv, ye or alef, and in that case the seat behaves like an ordinary vāv, ye or alef respectively. Technically, hamze is not a letter but a diacritic.

Although at first glance they may seem similar, there are many differences in the way the different languages use the alphabets. For example, similar words are written differently in Persian and Arabic, as they are used differently.

Differences from the Arabic writing system

Arguments and discussions on use of Perso-Arabic

There have been discussions between parties about replacing it, often raising the concept of romanization.