From Infogalactic: the planetary knowledge core
Jump to: navigation, search
For the traditional ordering of the letters of the Arabic alphabet, see Abjad numerals.

An abjad is a type of writing system where each symbol stands for a consonant, leaving the reader to supply the appropriate vowel. It is a term suggested by Peter T. Daniels[1] to replace the common terms "consonantary", "consonantal alphabet" or "syllabary" to refer to the family of scripts called West Semitic.

The name "abjad" (abjad أبجد) is derived from pronouncing the first letters of the Arabic alphabet in order. The ordering (abjadī) of Arabic letters used to match that of the older Hebrew, Phoenician and Semitic alphabets; ʾ b g d.

According to the formulations of Daniels,[1] abjads differ from alphabets in that only consonants, not vowels, are represented among the basic graphemes. Abjads differ from abugidas, another category defined by Daniels, in that in abjads, the vowel sound is implied by phonology, and where vowel marks exist for the system, such as nikkud for Hebrew and ḥarakāt for Arabic, their use is optional and not the dominant (or literate) form. Abugidas mark the vowels (other than the "inherent" vowel) with a diacritic, a minor attachment to the letter, or a standalone glyph. Some abugidas use a special symbol to suppress the inherent vowel so that the consonant alone can be properly represented. In a syllabary, a grapheme denotes a complete syllable, that is, either a lone vowel sound or a combination of a vowel sound with one or more consonant sounds.

The antagonism of abjad versus alphabet, as it was formulated by Daniels, has been rejected by other scholars because abjad is also used as a term not only for the Arabic numeral system but, which is most important in terms of historical grammatology, also as term for the alphabetic device (i.e. letter order) of ancient Northwest Semitic scripts in opposition to the 'south Arabian' order. This caused fatal effects on terminology in general and especially in (ancient) Semitic philology. Also, it suggests that consonantal alphabets, in opposition to for instance the Greek alphabet, were not yet true alphabets and not yet entirely complete, lacking something important to be a fully working script system. It has also been objected that, as a set of letters, an alphabet is not the mirror of what should be there in a language from a phonemic or even phonological point of view, rather, it is the data stock of what provides maximum efficiency with least effort from a semantic point of view.[2] 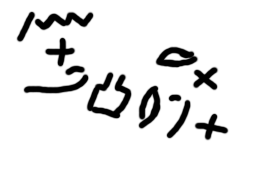 A specimen of Proto-Sinaitic script containing a phrase which may mean 'to Baalat'. The line running from the upper left to lower right reads mt l bclt.
See also: History of the alphabet § Descendants of the Aramaic abjad

The first abjad to gain widespread usage was the Phoenician abjad. Unlike other contemporary scripts, such as Cuneiform and Egyptian hieroglyphs, the Phoenician script consisted of only about two dozen symbols. This made the script easy to learn, and Phoenician seafaring merchants took the script wherever they went.

Phoenician gave way to a number of new writing systems, including the Greek alphabet and Aramaic, a widely used abjad. The Greek alphabet evolved into the modern western alphabets, such as Latin and Cyrillic, while Aramaic became the ancestor of many modern abjads and abugidas of Asia.

"Al-'Arabiyya", lit. "Arabic." An example of the Arabic script, which is an impure abjad.

"Impure" abjads have characters for some vowels, optional vowel diacritics, or both. The term "pure" abjad refers to scripts entirely lacking in vowel indicators. However, most modern abjads, such as Arabic, Hebrew, Aramaic and Avestan, are "impure" abjads, that is, they also contain symbols for some of the vowel phonemes. An example of a "pure" abjad is ancient Phoenician.

In the 9th century BCE, the Greeks adapted the Phoenician script for use in their own language. The phonetic structure of the Greek language created too many ambiguities when the vowels went unrepresented, so the script was modified. They did not need letters for the guttural sounds represented by aleph, he, heth or ayin, so these symbols were assigned vocalic values. The letters waw and yod were also used. The Greek alphabet thus became the world's first to have symbols representing vowel sounds.

Abugidas developed along a slightly different route. The basic consonantal symbol was considered to have an inherent "a" vowel sound. Hooks or short lines attached to various parts of the basic letter modify the vowel. In this way, the South Arabian alphabet evolved into the Ge'ez alphabet between the 5th century BC and the 5th century AD. Similarly, around the 3rd century BC, the Brāhmī script developed (from the Aramaic abjad, it has been hypothesized).

The other major family of abugidas, Canadian Aboriginal syllabics, was initially developed in the 1840s by missionary and linguist James Evans for the Cree and Ojibwe languages. Evans used features of Devanagari script and Pitman shorthand to create his initial abugida. Later in the 19th century, other missionaries adapted Evans' system to other Canadian aboriginal languages. Canadian syllabics differ from other abugidas in that the vowel is indicated by rotation of the consonantal symbol, with each vowel having a consistent orientation.

Abjads and the structure of Semitic languages

The abjad form of writing is well-adapted to the morphological structure of the Semitic languages it was developed to write. This is because words in Semitic languages are formed from a root consisting of (usually) three consonants, the vowels being used to indicate inflectional or derived forms. For instance, according to Classical Arabic and Modern Standard Arabic, the Arabic root ذ ب ح Dh-B-Ḥ (to slaughter) can be derived the forms ذَبَح dhabaḥa (he slaughtered), ذَبَحْتَ dhabaḥta (you (masculine singular) slaughtered), ذَبَّحَ dhabbaḥa (he slaughtered), يُذَبِّح yudhabbiḥ (he slaughters), and مَذْبَح madhbaḥ (slaughterhouse). In most cases, the absence of full glyphs for vowels makes the common root clearer, allowing readers to guess the meaning of unfamiliar words from familiar roots (especially in conjunction with context clues) and improving word recognition[citation needed][dubious – discuss] while reading for practiced readers.