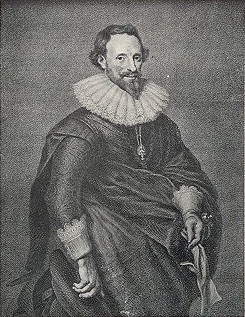 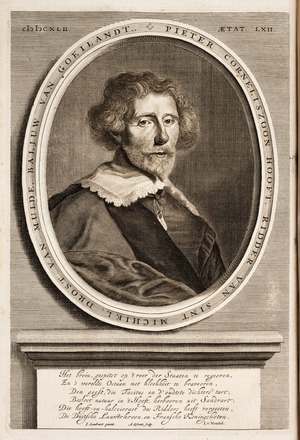 Pieter Corneliszoon Hooft (16 March 1581 in Amsterdam – 21 May 1647 in The Hague) - Knight in the Order of Saint Michael - was a Dutch historian, poet and playwright from the period known as the Dutch Golden Age. 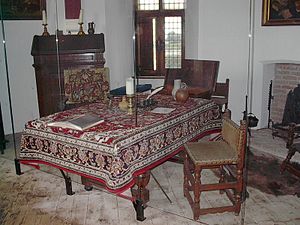 Pieter Corneliszoon Hooft, often abbreviated to P.C. Hooft, was born in Amsterdam as the son of the then mayor, Cornelis Hooft. Hooft was also the uncle of Cornelis and Andries de Graeff.

In 1598, his father sent him to France and Italy in order to get prepared for a career as merchant. However, Pieter Corneliszoon Hooft was more interested in art. In particular, he was deeply impressed by the Italian renaissance.[1]

In 1609, he was appointed bailiff of Muiden and the Gooiland. He founded the Muiderkring, a literary society located at his home, the Muiderslot, the castle of Muiden, in which he got to live due to his appointment as sheriff of Muiden. Among the members were the poets and playwrights Constantijn Huygens, Maria Tesselschade, G.A. Bredero and Joost van den Vondel, as well as the Portuguese singer Francisca Duarte. Hooft, Bredero, and Vondel were also founders of the First Nederduytsche Academy.

Hooft was a prolific writer of plays, poems and letters, but he concentrated from 1618 onwards on writing his history of the Netherlands (Nederduytsche Historiën), inspired by Roman historian Tacitus. His focus was primarily on the Eighty Years' War between the Netherlands and Spain. Though he tried in this work to give a report of the events which was as impartial as possible, he did not really succeed in doing so.

As a poet, he was influenced by his Renaissance contemporaries in France and Italy. 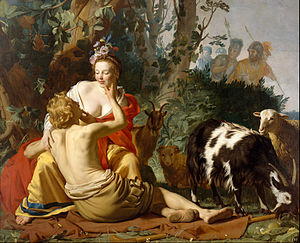 In 1947, 300 years after P.C. Hooft died, a literary prize in his name was instituted by the Dutch government. An independent foundation annually awards the prize. Initially it was awarded for specific works, but in recent years it is awarded based on the entire collection of a writer.

He is also erroneously mentioned as "Denmark's most famous poet" on episode three of the television program Metalocalypse.