From Infogalactic: the planetary knowledge core
(Redirected from Platea)
Jump to: navigation, search

Plataea (/pləˈtiːə/) or Plataeae (/pləˈtiːiː/; Ancient Greek: Πλάταια or Πλαταιαί) was an ancient city, located in Greece in southeastern Boeotia, south of Thebes.[1] It was the location of the Battle of Plataea in 479 BC, in which an alliance of Greek city-states defeated the Persians.

Plataea was destroyed in the Peloponnesian War by Thebes and Sparta in 427 BC and rebuilt in 386 BC.

Alliance with Athens and presence at Marathon 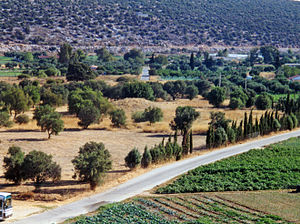 The burial mound of the Plataeans, fallen at the Battle of Marathon, Marathon

Herodotus tells that, in order to avoid coming under Theban hegemony, Plataea offered to "put themselves into Spartan hands". However, the Spartans refused this offer and, wishing to cause mischief between the Boeotians and Athens, recommended that the Plataeans ally themselves with Athens instead. This advice was accepted and a delegation sent to Athens, where the Athenians were agreeable to such a proposal. On learning that Athens had accepted the alliance, the Thebans sent an army against Plataea, but were met by an Athenian one. Corinth attempted to mediate the dispute, and achieved an agreement that set the border between Thebes and Plataea. In addition, Thebes made a commitment not to interfere with cities that did not want to be a part of a Boeotian state. However, after the Corinthians had left and Athenians were starting their journey home, they were set upon by the Boeotians. In the subsequent battle, the Athenians prevailed and set the river Asopus as the border between Thebes and Plataea.

With Athens as their ally, the Plataeans were able to avoid subjugation by their neighbours and maintain their freedom. In honour of this debt, at the Battle of Marathon, Plataea alone would fight at the Athenians' side. Herodotus describes how, on the eve of battle and faced with the formidable Persian expeditionary force, the Athenians had despaired of the Spartans, or indeed anyone else, coming to their aid in what seemed to be impossible odds. Sentinels spied dust clouds in the north and initially feared that another Persian army, or a Persian ally, was on the way to the battlefield. Instead it was the Plataeans coming "panstratiá", i.e., having sent "every available fighting man" (this is thought to have amounted to about 1,000) in Athens' hour of greatest need. They were led by their general, Arimnestos. In acknowledgement and gratitude of their ally's fidelity, the Athenians gave the Plataeans the honour of the left flank during the battle. After the battle, the Plataeans were allowed to share Athenian memorials and in the (normally exclusively Athenian) religious rites, sacrifices and games asking for the blessing of Athens' patron gods.

In 479 BC Plataea was the site of the final battle that repelled the second Persian invasion of Greece. According to Herodotus, the Spartan general Pausanias led an allied Greek defense against Mardonius' Persian forces. Although they were vastly outnumbered, the Greeks were able to kill Mardonius; his death precipitated the Persian rout that followed. Accounts vary, but there is general agreement that the battle resulted in a significant number of Persian dead, with many more put to flight. This battle would mark the last time a Persian army invaded mainland Greece. The Greek victory at Plataea is commemorated by the so-called Serpent Column erected at Delphi.

According to Thucydides, around during 431 BC, an armed force of 300 Thebans commanded by two leading Theban generals/politicians were admitted after dark on a stormy moonless night into Plataea by two private citizens who expected the Theban force to immediately capture and kill the democratic leaders and bring Plataea into alliance with Thebes. Instead the Theban commanders harmed no one but attempted to persuade all of the citizens of Plataea to join with Thebes' allies. The democratic leadership accepted the offer but quickly worked out that the invading force could be overpowered because of their small numbers, their lack of knowledge of the streets, the bad weather, and the darkness. The enraged citizenry then attacked them. In one of the rare instances in which both women and slaves took part in what amounted to warfare, the citizenry killed over half the 300 Thebans. Thucydides reports that a number of the remaining Thebans escaped with the help of a Plataean woman who provided them with an axe to break open one of the town's gates. Some of the invaders tried to escape by jumping off the city wall, but most of these were killed in the fall. Others entered a large open building, mistaking it for an exit from the town. The Plataeans locked the building and held them there for a short time before killing them all.

A second larger Theban force was supposed to reinforce the invading force, but the weather and the flooding of the Asopos river delayed them. The Plataeans, to forestall any attempt by the second force to capture Plataeans who lived outside the walls, agreed to let their Theban prisoners live if the Thebans did no further harm. Each side alleged later that the other had taken an oath to the agreement and then broke it, a potentially serious issue in the propaganda war that would impact on future relations between the two sides.

After the invaders had entered the town, a Plataean messenger was sent to Athens to alert them to what was happening. A second messenger later that night updated the Athenians on the outcome. The Athenians sent a messenger back to Plataea instructing them not to kill the prisoners, but he arrived too late. The Plataeans had already killed them all. The Athenians also sent a force to relieve Plataea. Women, children, and men too old or otherwise unfit for military service were evacuated to Attica.

Thucydides states (Book II.1-6) that these events, during which Thebes and its Boeotian allies lost over 10 per cent of their total army, represented the beginning of the Peloponnesian War, which would go on for another 27 years. He says that "the treaty had now been broken by an overt act after the affair at Plataea" and that "Athens and Lacedaemon now resolved to send embassies to the King and to such other of the barbarian powers as either party could look to for assistance."

During the summer two years after these events occurred, the Spartan king Archidamus II finally led a Peloponnesian force against Plataea and began to raze their crops. The Plataeans, in response, dispatched a herald reminding the Spartans of the glorious deeds the Plataeans performed during the Greco-Persian War and of the oath the Spartans swore to protect them and keep them independent and reminding the Spartans that in 479 BC Pausanias, the Spartan general, had decreed that Plataea was on holy ground and it should never be attacked.[2] The Spartans responded by demanding Plataean neutrality in return for their protection. After consulting Athens, Plataea rejected the Spartan proposal and began in earnest to prepare their defences. The Spartans then quickly laid siege to the city, and employed several innovative, yet unsuccessful tactics to bypass the Plataean defences. Failing in these undertakings, the Spartans built a line of fortifications around the city, left enough troops to guard the walls, then retired.

The winter of the next year found the Plataeans in a desperate situation. They were besieged by the Spartans and Boeotians and were uncertain whether any Athenian help would arrive. Their stores were running dangerously low, and so a desperate plan was developed to try and salvage their position. The plan involved breaking past the Spartan defences and escape; originally all the men were to join the attempt, but the danger being so great, only 220 ultimately agreed to go. They accordingly waited for a dark, stormy night, and implemented the plan. Catching the guards by surprise, 212 men managed to evade capture, yet Thucydides writes, "it was mainly the violence of the storm that enabled them to effect their escape at all."

The remaining Plataeans finally surrendered to the Spartans in the summer of the next year, as all supplies they had were exhausted and no hope of help remained. They had trusted the Spartans to a fair trial, as the Lacedaemonians (Spartans) had promised to "judge them all fairly", and that "only the guilty should be punished" if they yielded.

Yet, when the Plataean prisoners were brought before the judges, no trial was held; no chance for apology was offered. The Spartans simply asked each of the prisoners if they had done the Lacedaemonians and allies any service in the war, to which the prisoners, after a heated debate, ultimately had to answer "no."

Thus the Spartans killed over 200 of the Plataean defenders "among which were 25 Athenians" according to Thucydides. The Thebans ultimately razed the entire town, and

built on to the precinct of Hera an inn two hundred feet square, with rooms all round above and below, making use for this purpose of the roofs and doors of the Plataeans: of the rest of the materials in the wall, the brass and the iron, they made couches which they dedicated to Hera, for whom they also built a stone chapel of a hundred feet square.

The choice of Hera as the goddess glorified at the expense of the dispossessed Plataeans might have been motivated by Hera's alleged jealousy of Zeus' giving birth to Athena, patron goddess of Athens, without recourse to her.

The conspicuous worship of Hera at Plataea continued long past the end of the war. In later times the temple was renowned for a sculpture by Callimachus of Hera seated as a bride, as well as a sculpture of a matronly Hera in a standing position.[3]