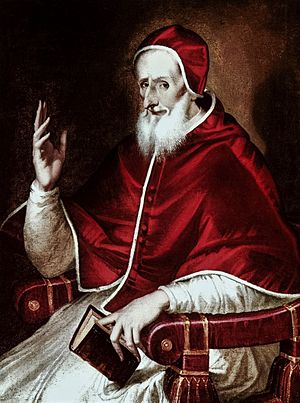 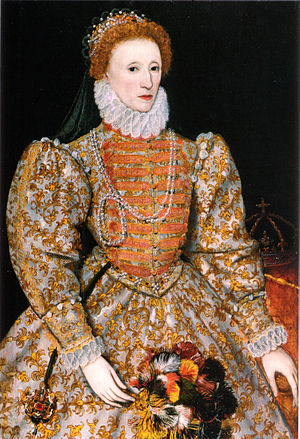 Regnans in Excelsis ("reigning on high") was a papal bull issued on 27 April 1570 by Pope Pius V declaring "Elizabeth, the pretended Queen of England and the servant of crime", to be a heretic and releasing all her subjects from any allegiance to her, even when they had "sworn oaths to her", and excommunicating any that obeyed her orders.[1]

"We charge and command all and singular the nobles, subjects, peoples and others afore said that they do not dare obey her orders, mandates and laws. Those who shall act to the contrary we include in the like sentence of excommunication."

The bull, written in Latin, is named from its incipit, the first three words of its text, which mean "ruling from on high" (a reference to God).[2] Among the queen's offences, "She has removed the royal Council, composed of the nobility of England, and has filled it with obscure men, being heretics."

The Papacy had previously reconciled with Mary I, who returned the Church of England to Catholicism. After Mary's death in November 1558, Elizabeth's Parliament passed the Act of Supremacy of 1559, which re-established the Church of England’s independence from papal authority. This bull can be seen as an act of retaliation for the religious settlement, but as it was delayed by eleven years it was most likely instigated by pressure from Philip II of Spain, the Duke of Norfolk or Mary, Queen of Scots, all of whom had a vested interest in overthrowing Elizabeth. The delay was caused in part by a number of royal Catholic suitors who hoped to marry Elizabeth, and because she had tolerated Catholic worship in private. The Bull was issued in support of, but following, the 1569 "Northern Rebellion" in England, and the first Desmond Rebellion in Ireland, with foreign Catholic support, and hardened her opinion against her landowning Catholic subjects.

Aftermath of the bull

The bull provoked the English government into taking more repressive actions against the Jesuits, whom they feared to be acting in the interests of Spain and the papacy. This reaction soon seemed justified: it was the publication in England of Pius's exhortation that gave the impetus to the Ridolfi plot, in which the Duke of Norfolk was to kidnap or murder Queen Elizabeth, install Mary, Queen of Scots, on the throne and then become de facto king by marrying her.[3]

A refutation of the Bull by Heinrich Bullinger of Zurich was published in 1571.[4]

At the request of the Jesuits and to relieve the pressures on Catholics in England, Pope Gregory XIII issued a clarification or suspension in 1580, explaining that Catholics should obey the queen outwardly in all civil matters, until such time as a suitable opportunity presented itself for her overthrow.[5] Soon after the start of the Anglo-Spanish War (1585–1604), an English Act "against Jesuits, seminary priests and other such like disobedient persons" was passed into law.

In 1588, Pope Sixtus V, in support of the Spanish Armada, renewed the solemn bull of excommunication against Queen Elizabeth I, for the regicide of Mary, Queen of Scots, in 1587 as well as the previously catalogued offences against the Catholic Church.[6][dead link] During the threat of invasion by the Spanish Armada, it transpired that most of the Catholic residents in England remained loyal, and that those who were a real threat to the throne, like William Cardinal Allen and Robert Persons, were already exiles.

While the bull had little impact in England, it caused a rift in Elizabeth's Kingdom of Ireland where most of the population remained Roman Catholic; Gerald FitzGerald, 15th Earl of Desmond, had used the bull as justification for the second Desmond Rebellion.[7] While divisions had existed before 1570, after the bull the official world based in Dublin conformed to Anglicanism while the majority of the Parliament of Ireland were Catholics until 1613.[8]

Lisa Jardine, Gloriana Rules the Waves: or, The Advantage of Being Excommunicated (and Being a Woman), in Transactions of the Royal Historical Society, Volume 14, Sixth Series, pp. 209-222 (2004)