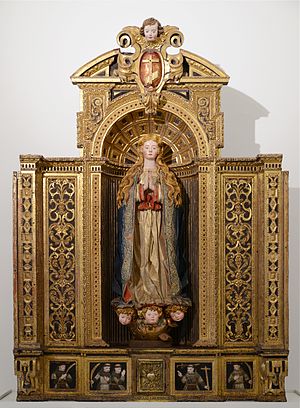 A reredos or raredos is an altarpiece, or a screen or decoration behind the altar in a church, often including religious images. In French and sometimes in English, this is called a retable; in Catalan a retaule, in Spanish a retablo, etc. It can be made of stone, wood, metal, ivory, or a combination of materials. The images may be painted, carved, gilded, composed of mosaics, and/or embedded with niches for statues. Sometimes a tapestry is used, or other fabric such as silk or velvet.

Reredos is derived through Middle English from the 14th century Anglo-Norman areredos, which in turn is from arere behind +dos back, from Latin dorsum. The term referred generally to an open hearth of a fireplace or a screen placed behind a table. Used in the 14th and 15th centuries, reredos had become nearly obsolete until revived in the 19th century.

According to the Getty Art & Architecture Thesaurus Online, "A "retable" is distinct from a 'reredos'; while the reredos typically rises from ground level behind the altar, the retable is smaller, standing either on the back of the altar itself or on a pedestal behind it. Many altars have both a reredos and a retable."[1] But this distinction may not always be observed.

The retable may have become part of the reredos when an altar was moved away from the wall. For altars that are still against the wall, the retable often sits on top of the altar, at the back, particularly when there is no reredos (a dossal curtain or something similar is used instead). The retable may hold flowers and candlesticks.

The term may also be used for similar structures, if elaborate, in secular architecture, for example very grand carved chimneypieces.[2]