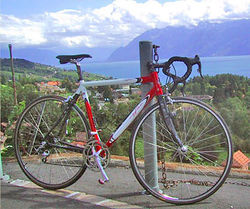 The term road bicycle is used to describe bicycles built for traveling at speed on paved roads. Some sources use the term to mean racing bicycle. Other sources specifically exclude racing bicycles from the definition, using the term to mean a bicycle of a similar style but built more for endurance and less the fast bursts of speed desired in a racing bicycle; as such, they usually have more gear combinations and fewer hi-tech racing features. Certain of these bicycles have been referred to as 'sportive' bicycles to distinguish them from racing bicycles.[1]

The term road bicycle can also describe any type of bike used primarily on paved roads, in contrast to bikes primarily intended for off-road use, such as mountain bikes. Several variations of road bikes include: 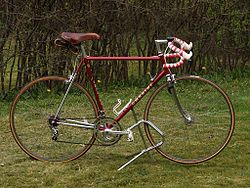 A vintage road bicycle by the Italian company Chesini.