From Infogalactic: the planetary knowledge core
Jump to: navigation, search
For other uses, see Canoe (disambiguation). 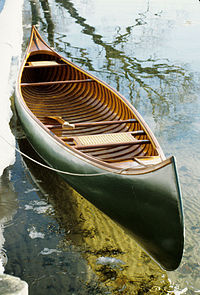 Birchbark canoe at Abbe Museum, a division of the Smithsonian Institution which specializes in Native America culture and is located in Bar Harbor, Maine

A canoe is a lightweight narrow boat, typically pointed at both ends and open on top, propelled by one or more seated or kneeling paddlers facing the direction of travel using a single-bladed paddle.[1] In some European countries, like the United Kingdom, the term canoe is often used for both canoes and kayaks,[2] with canoes called Canadian canoes then. This is seen in the International Canoe Federation nomenclature.

Canoes are used for racing, whitewater canoeing, touring and camping, freestyle, and general recreation. The intended use of the canoe dictates its hull shape and length and construction material.

Historically, canoes were dugouts or made of bark on a wood frame,[3] but construction materials evolved to canvas on a wood frame, then to aluminum. Most modern canoes are made of molded plastic or composites such as fiberglass. Until the mid-1800s the canoe was an important means of transport for exploration and trade, but then transitioned to recreational or sporting use. Canoeing has been part of the Olympics since 1936. In places where the canoe played a key role in history, such as the northern United States, Canada, and New Zealand, the canoe remains an important theme in popular culture.

Canoes can be adapted to many purposes, for example with the addition of sails, outboard motors, and outriggers. 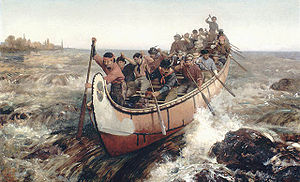 The word canoe comes from the Carib kenu (dugout), via the Spanish canoa.[4]

Constructed between 8200 and 7600 BC, and found in the Netherlands, the Pesse canoe may be the oldest known canoe. Excavations in Denmark reveal the use of dugouts and paddles during the Ertebølle period, (ca 5300 BC – 3950 BC).[5]

Australian Aboriginal people made canoes using a variety of materials, including bark and hollowed out tree trunks.[6] The indigenous people of the Amazon commonly used Hymenaea trees.

Many indigenous peoples of the Americas built bark canoes. They were usually skinned with birch bark over a light wooden frame, but other types could be used if birch was scarce. At a typical length of 4.3 m (14 ft) and weight of 23 kg (50 lb), the canoes were light enough to be portaged, yet could carry a lot of cargo, even in shallow water. Although susceptible to damage from rocks, they are easily repaired.[7] Their performance qualities were soon recognized by early European immigrants, and canoes played a key role in the exploration of North America,[8] with Samuel de Champlain canoeing as far as the Georgian Bay in 1615. René de Bréhant de Galinée a French missionary who explored the Great Lakes in 1669 declared: "The convenience of these canoes is great in these waters, full of cataracts or waterfalls, and rapids through which it is impossible to take any boat. When you reach them you load canoe and baggage upon your shoulders and go overland until the navigation is good; and then you put your canoe back into the water, and embark again.[9] American painter, author and traveler George Catlin wrote that the bark canoe was "the most beautiful and light model of all the water crafts that ever were invented."[10] 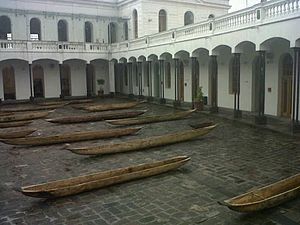 These antique dug out canoes are in the courtyard of the Old Military Hospital in the Historic Center of Quito.

Native American groups of the north Pacific coast made dugout canoes in a number of styles for different purposes, from western red-cedar (Thuja plicata) or yellow-cedar (Chamaecyparis nootkatensis), depending on availability.[11] Different styles were required for ocean-going vessels versus river boats, and for whale-hunting versus seal-hunting versus salmon-fishing. The Quinault of Washington State built shovel-nose canoes, with double bows, for river travel that could slide over a logjam without portaging. The Kootenai of British Columbia province made sturgeon-nosed canoes from pine bark, designed to be stable in windy conditions on Kootenay Lake.[12]

The first explorer to cross the North American continent, Alexander Mackenzie, used canoes extensively, as did David Thompson and the Lewis and Clark Expedition.

The birch bark canoe was used in a 6,500 kilometres (4,000 mi) supply route from Montreal to the Pacific Ocean and the Mackenzie River, and continued to be used up to the end of the 19th century.[15]

Also popular for hauling freight on inland waterways in 19th Century North America were the York boat and the batteau.

In 19th-century North America, the birch-on-frame construction technique evolved into the wood-and-canvas canoes made by fastening an external waterproofed canvas shell to planks and ribs by boat builders Old Town Canoe, E.M. White Canoe, Peterborough Canoe Company and at the Chestnut Canoe Company[16] in New Brunswick.

Although canoes were once primarily a means of transport, with industrialization they became popular as recreational or sporting watercraft. John MacGregor popularized canoeing through his books, and in 1866 founded the Royal Canoe Club in London and in 1880 the American Canoe Association. The Canadian Canoe Association was founded in 1900, and the British Canoe Union in 1936.

Sprint canoe was a demonstration sport at the 1924 Paris Olympics and became an Olympic discipline at the 1936 Berlin Olympics.[17] The International Canoe Federation was formed in 1946 and is the umbrella organization of all national canoe organizations worldwide.

In recent years First Nations in British Columbia, Washington State have been revitalizing the ocean-going canoe tradition. Beginning in the 1980s, the Heiltsuk and Haida were early leaders in this movement. The paddle to Expo '86 in Vancouver by the Heiltsuk, and the 1989 Paddle to Seattle were early instances of this. In 1993 a large number of Canoes paddled from up and down the coast to Bella Bella in its first canoe festival - 'Qatuwas.[18] The revitalization continued - an Tribal Journeys began with trips to various communities held most years. 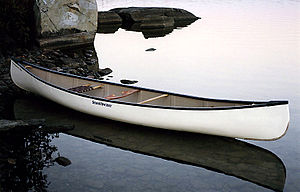 Hull design must meet different, often conflicting, requirements for speed, carrying capacity, maneuverability, and stability[19] The canoe's hull speed can be calculated using the principles of ship resistance and propulsion. 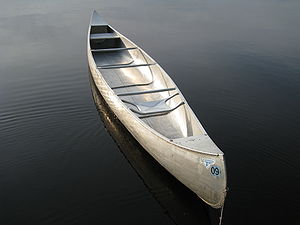 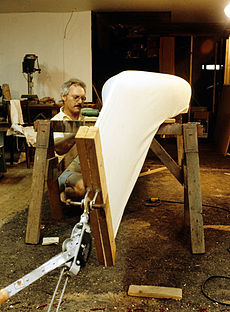 Stretching canvas on a canoe

These materials and techniques are used by artisans and produce boats that some consider more attractive, but which are more fragile than those made with modern methods.[29] 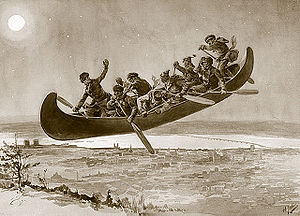 In Canada, the canoe has been a theme in history and folklore, and is a symbol of Canadian identity.[34] From 1935 to 1986 the Canadian silver dollar depicted a voyageur and an aboriginal paddling a canoe with the Northern Lights in the background.

The Chasse-galerie is a French-Canadian tale of voyageurs who, after a night of heavy drinking on New Year's Eve at a remote timber camp want to visit their sweethearts some 100 leagues (about 400 km) away. Since they have to be back in time for work the next morning they make a pact with the devil. Their canoe will fly through the air, on condition that they not mention God's name or touch the cross of any church steeple as they fly by in the canoe. One version of this fable ends with the coup de grâce when, still high in the sky, the voyageurs complete the hazardous journey but the canoe overturns, so the devil can honour the pact to deliver the voyageurs and still claim their souls.

In John Steinbeck's novella The Pearl set in Mexico, the main character's canoe is a means of making a living that has been passed down for generations and represents a link to cultural tradition.[35]

The Māori, indigenous Polynesian people arrived in New Zealand in several waves of canoe voyage. Canoe traditions are important to the identity of Māori. Whakapapa (genealogical links) back to the crew of founding canoes served to establish the origins of tribes, and defined tribal boundaries and relationships.[36]

Modern canoe types are usually categorized by the intended use. Many modern canoe designs are hybrids (a combination of two or more designs, meant for multiple uses). The purpose of the canoe will also often determine the materials used. Most canoes are designed for either one person (solo) or two people (tandem), but some are designed for more than two people. 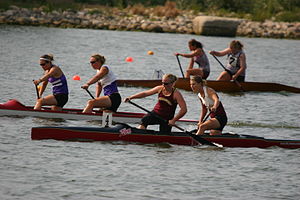 Sprint canoe is also known as flatwater racing. The paddler kneels on one knee, and uses a single-blade paddle.[37] Canoes have no rudder, so the boat must be steered by the athlete’s paddle using a j-stroke. Canoes may be entirely open or be partly covered. The minimum length of the opening on a C1 is 280 cm (110 in). Boats are long and streamlined with a narrow beam, which makes them very unstable. A C4 can be up to 9 m (30 ft) long and weigh 30 kg (66 lb).[38] ICF classes include C1 (solo), C2 (crew of two), and C4 (crew of four). Race distances at the 2012 Olympic Games were 200 and 1000 meters. 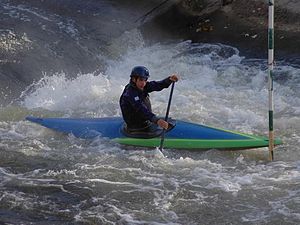 Marathons are long-distance races which may include portages. Under ICF rules minimum canoe weight is 10 and 14 kg (22 and 31 lb) for C1 and C2 respectively. Other rules can vary by race, for example in the Classique Internationale de Canots de la Mauricie athletes race in C2s, with a maximum length of 5.6 m (18 ft 6 in), minimum width of 69 cm (27 in) at 8 cm (3 in) from the bottom of the centre of the craft, minimum height of 38 cm (15 in) at the bow and 25 cm (10 in) at the centre and stern.[42] The Texas Water Safari, at 422 km (262 mi), includes an open class, the only rule being the vessel must be human-powered, and although novel setups have been tried, the fastest so far has been the six-man canoe.[43]

A square-stern canoe is an asymmetrical canoe with a squared-off stern for the mounting of an outboard motor, and is meant for lake travel or fishing. (In practice, use of a side bracket on a double-ended canoe often is more comfortable for the operator, with little or no loss of performance.) Since mounting a rudder on the square stern is very easy, such canoes often are adapted for sailing. 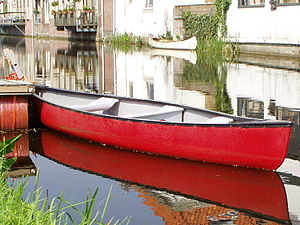 In North America, a "touring canoe" is a good-tracking boat, good for wind-blown lakes and large rivers. A "tripping canoe" is a touring canoe with larger capacity for wilderness travel and is often designed with more rocker for better maneuverability on whitewater rivers but requiring some skill on the part of the canoeist in open windy waters when lightly loaded. Touring canoes are often made of lighter materials and built for comfort and cargo space. Tripping canoes such as the Chestnut Prospector derivates, and the Old Town Trippers, are typically made of heavier and tougher materials, and are usually a more traditional design. A Prospector canoe is a generic name for copies of the Chestnut model, a popular type of tripping canoe marked by a symmetrical hull and a relatively large amount of rocker, giving a nice balance for wilderness tripping. This model also has the ability to carry large amounts of gear while being maneuverable enough for rapids. This makes it a superb large capacity wilderness boat, but requires skill on windy, broad waters when lightly loaded. It is made in a variety of materials. For home construction, 4 mm (3⁄16 in) plywood is commonly used, mainly marine ply, using the "stitch and glue" technique. Commercially built canoes are commonly built of fibreglass, HDPE, Kevlar, Carbon Fiber, and Royalex which although relatively heavy, is very durable.

A touring canoe is sometimes covered with a greatly extended deck, forming a "cockpit" for the paddlers. A cockpit has the advantage that the gunwales can be made lower and narrower so the paddler can reach the water more easily, and the sides of the boat can be higher, keeping the boat dryer. 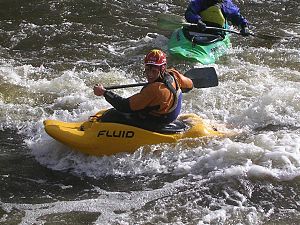 A canoe specialized for whitewater play and tricks. Most are identical to short, flat-bottomed kayak playboats except for internal outfitting. The paddler kneels and uses a single-blade canoe paddle. Playboating is a discipline of whitewater canoeing where the paddler performs various technical moves in one place (a playspot), as opposed to downriver where the objective is to travel the length of a section of river (although whitewater canoeists will often stop and play en-route). Specialized canoes known as playboats can be used.