Fairlie was born in Glasgow, the son of T. Archibald Fairlie (an engineer) and Margaret Fairlie. He trained at Crewe and Swindon railway works, then joined first the Londonderry and Coleraine Railway as Locomotive Superintendent in 1852, and four years later the Bombay, Baroda & Central India Railway before returning to London in 1859 to establish himself as a railway engineering consultant.

He is chiefly known for the invention of the Fairlie double-bogie articulated locomotive (patented in 1864) that is particularly associated with tightly curved railways and especially narrow gauge mountain lines. The first such, the Pioneer, was built in 1865 for the Neath and Brecon Railway, but it was with the Little Wonder built in 1869 for the Festiniog Railway that Fairlie made his name as the inventor of something special.

On the Festiniog Railway the new engine could be tested against not one but six engines all of the same tried and tested and improved design (the first ever successful narrow gauge steam locomotive design) and they all came from the locomotive works of George England and Co., the Hatcham Ironworks, Pomeroy Street, New Cross, London, where the Little Wonder was also built. A series of tests, for which detailed performance records survive, were held between 18 September 1869 and 8 July 1870.[2] 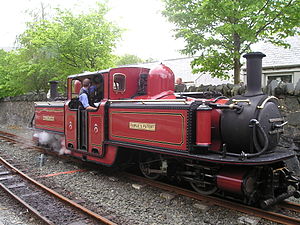 The success of those public trials gave new heart to all those civil servants challenged with the task of approving one standard gauge line or two narrow gauge lines for the same total budgeted cost. Fairlie was richly rewarded with orders and commissions from overseas including one involving work in Venezuela in 1873/4, which resulted in a serious illness. By 1876 forty three railways operated Fairlie's patent locomotives, not always successfully.[4] For the story of his patent articulated engine see the Fairlie locomotive entry.

However, Robert Fairlie's professional career and social standing had been seriously threatened eight years earlier by a remarkable case (reported in The Times of 8 April 1862) brought against him in the Central Criminal Court by his longtime business associate, George England, who alleged perjury on the part of Robert Francis Fairlie who had eloped with England's daughter Eliza Anne England and, to procure a marriage licence, had sworn a false affidavit that her father, Mr George England, had consented to the union, which was not true. After this marriage they had run away to Spain.

This accusation would, if proved, have resulted in a prison sentence. Under cross-examination by Sergeant Ballantyne (who appeared for Fairlie), George England was forced to admit that he had run away with his present wife, who was the mother of the young lady in question, and that he had a wife living at that time. He had lived with this lady several years but could not marry her until his wife died. By a quirk of English law, at that time, a child born out of wedlock was considered nobody's child. In law she was nothing to do with George England and could marry whom she pleased. There was no case to answer and therefore a verdict of not guilty was returned.[5]

But none of this stopped George England building Robert Fairlie's remarkable double-engine for the Ffestiniog Railway seven years later. Fairlie's Little Wonder was delivered to the FR in the summer of 1869 and George England retired. In September 1869 Robert Fairlie joined with George England's son and J.S. Fraser to take over the Hatcham Works and to form the Fairlie Engine & Steam Carriage Co. but George England junior died within a few months. Locomotive production ceased at the end of 1870 but the Fairlie Engine & Rolling Stock Co. continued as an office for design and for the licensing of Fairlie locomotive manufacture.

By 1881, George England (1811–1878) was dead and Robert Fairlie and his wife Eliza were living at 13 Church Buildings, Clapham with their four children, Robert, John, Lily and Jessie and Robert's mother in law, Sarah England, together with Frances Knight (cook) from Norfolk, also four domestic servants and Emma Bermoker (possibly an au pair or governess) from Vevey in Switzerland.[6] Robert Francis Fairlie died in London on 31 July 1885 and is buried at West Norwood Cemetery.